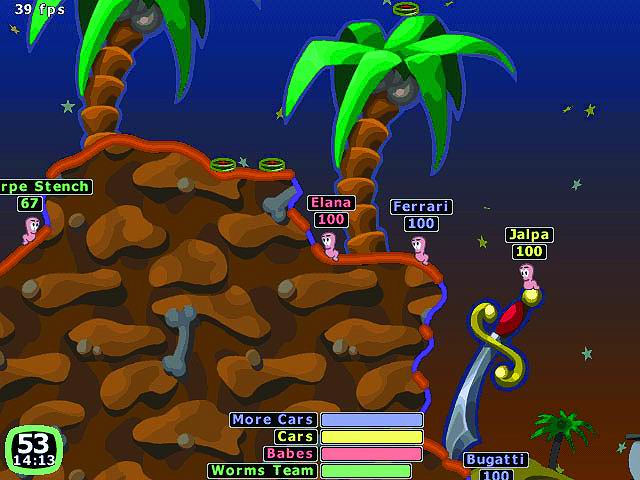 BY MARK SUTTON: Growing up, one of my favorite games was Worms. Over time there have been new additions to the formula but it remains mostly the same experience as the original title released back in 1995.

Worms was, and still is, bags of fun.  Join me on a trip down memory lane.

I can’t remember when I first played Worms. It was so long ago that makes me feel old just thinking about it. The game is set out with cartoon-style graphics with slapstick like attacks. It revolves around a group of worms set with different voices and weapons. These worms are not ”The covered in soil getting eaten by birds” type of worms. These worms are lethal and armed with a vast array of weapons and equipment.

Why are these worms fighting killing one another? Well as far as I can tell that has never been established. It is very good fun though me as a writer I just make up a reason why they are at war with each other. It may be over territory or it may be something more sinister.

Worms is fun. Simple. It isn’t a serious game and if you do not laugh at least once then you are a zombie. Period. The game itself has spawned onto many platforms. I first played it on the original PlayStation and what a blast I had. Literally.

Worms has a variety of imaginative weapons like for example the ”Banana Bomb” It doesn’t sound scary now, does it? Trust me though when that sucker hits you are going down. It does serious damage to both your opponent and the surrounding land. The game has many weapons including grenades, bazooka, shotguns, and airstrikes. It is a very funny concept that is extremely fun and can take up hours of your time.

Acoustically, Worms is a joy.  The music is quirky and unique, perfectly complicating the varied maps including deserted islands and even Hell.

These worms are not of the easily eaten garden variety. These are the psychotic, suicidal, hell-bent on victory type of worms. Worms was and still is to this day a great success with many sequels and spin-offs spawned on many different platforms.

The worms are here to stay and whatever the reason for their fighting lets hope that it continues for many years to come. I love this game and I am sure you will too. So pop along to your local game store or get it online. You will not be disappointed in this little gem.