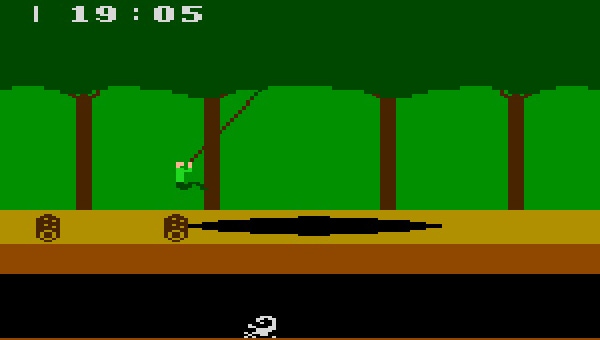 As an adult gamer, I am one of millions who count gaming as their favourite hobby (and us adult gamers actually make up a huge chunk of the gaming market, but that’s another story).  Throughout our time with video games, we’ve played hundreds if not thousands of games, but one game will always hold a special place on our hearts: our first ever game.

We’ve put together our first ever games that introduced us to gaming.

I’ve written about Sonic the Hedgehog 2 on the Sega Master System 2 being my first ever favourite game (along with 25+ other gaming influencers) but Sonic wasn’t the first game I played.  Long before I received the Master System, even before I received a Game Boy, my journey with video games started with an Atari 2600 JR.  It was a hand-me-down but sparked a love for gaming that still burns to this day.

Considering I was maybe 7 or so and had never held a gamepad before, I remember it being quite a frustrating experience in the beginning.  I kept falling into the pit (I’m assuming that’s where the name comes from?) and I’d run to the next screen only to be killed by the white scorpion.

On the flip side, I thought that the Tarzan-like sound effect when swinging on the rope was really cool.  I never finished this game, but I spent countless hours with it and will never forget it.

My first-ever game was Asteroids on Atari.

Super Mario Land on the original Game Boy.  Forget that it didn’t have any color, and that the big grey brick would chew through batteries like my dog Rowland with every new pair of shoes I buy (he’s a Cavachon and he’s adorable and he’s better than your dog so leave me alone).

Super Mario Land had amazing platforming mechanics before they were even a thing, with varied levels and a one-more-game replayability factor.  I would play it every single day until I finally got Super Mario Bros. 3 on the Super Famicom.  It’s a classic that I wish I could return to.

Bugs Bunny: Lost in Time was the first game I ever played and the title that made me fall in love with gaming.  My older brother had a PlayStation and spent all of his time playing Grand Theft Auto, but I was too young to play it.

I was given Bugs Bunny: Lost in Time for a Christmas present and it was so amazing to finally be able to play a game of my own – though my brother didn’t like it much!  I couldn’t wait to come home from school every day and play for a few hours, a break from reality at a time when I had a lot going on.

Some might call me deluded, but I actually hold Bugs Bunny: Lost in Time in higher regard than Mario 64 and Spyro…though it is probably the nostalgia speaking!

What was YOUR first game?  Let us know in the comments!