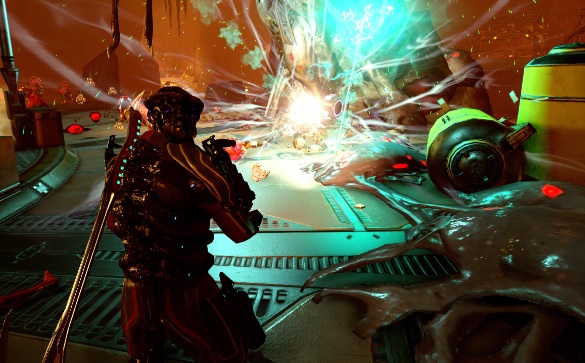 BY DANIEL MOORE: Warframe is one best free to play games on the market for a slew of reasons – it’s just awesome. One of the biggest reasons is its diverse range of weaponry from multiple factions, each with their own unique feel and play style action. One the more interesting weapons is the Zarr.

The Zarr is a handheld cannon built by the Grineer and can alternate between two modes at any moment: barrage and cannon. The barrage mode fires multiple small, high-powered rounds over a short distance, like a shotgun. The cannon mode fires an explosive cannonball that detonates into more explosive cannonballs. It’s one of the best weapons and most fun use, but how did the devs think to create such a fun and creative weapon.

But, why give a cannon a shotgun feature? By borrowing from history, of course!

Well, there’s more than one potential historical influence on the cannon, but the most likely is the swivel gun. The Zarr carries a striking resemblance the swivel cannon, having the exact shape and similar size. The swivel gun was a small portable cannon, too small for ship sinking yet was commonly carried on ships. The reason for this was soldiers could transport the cannon from one side of the ship to another because of how lightweight the cannon was. The cannon was primarily used as an anti-personnel weapon, able to shred through groups of men or break through the wood of a ship, or any defenses put up for men to hide behind such as giant board shields placed to hide musket men. Something a single musket shot would not be able to accomplish. The most common ammo type in a swivel gun used was known as grapeshot. A paper canvas was filled with small cannon balls and fired, like a shotgun slug, from the cannon. This ammo type explains the barrage type the Zarr uses. The swivel gun was useful for more than just ship combat, however. Swivel guns were placed around castle defenses since they could easily be moved around depending on which side the enemy attacked from. Armies would keep them on hand as well as they were light enough to move with the army, and the grapeshot would shred through advancing infantry easily.

But why call it the Zarr cannon?

Well the Grineer, the people who designed the weapon, can’t properly speak English due to horrible genetic deformities and commonly slur and mispronounce words. And the swivel gun saw lots of use during the age of piracy, so Zarr may just be grineerism of ARR, like a pirate. Pretty silly if you ask me.

Another explanation for the cannons inspiration is the one shares it shares its namesake with, The Tsar Cannon! Pronounced the same way, the Tsar Cannon was made for the emperor of Russia, whom was called a tsar and was made entirely out of bronze to celebrate Russian casting art.

The cannon was made by Andrey Chekhov in 1586. The Tsar Cannon survives today but has nearly been destroyed by time on multiple occasions. During Peter the Great’s modernization of Russia, He had all cannons smelted down and recast to be more European, however, the Tsar Cannon was spared because of its beautiful craftsmanship.  On another occasion, the wooden carriage that carried the cannon was consumed when Moscow was burned during Napoleon’s invasion of Russia, and Napoleon considered taking it as a war trophy for himself. A new metal carriage was built in 1835 to replace the old one, undamaged by the burning, however, the new carriage meant it could no longer fire.

The cannon stands today at Ivanovskaya Square next to the largest bronze bell constructed, The Tsar Bell. Fitting the biggest bombard cannon would come to rest with the largest bell as if to sound off the coming strike from the beast. As impending as the cannon looks, it was mostly for symbolic purposes, however, there was gunpowder residue found within the cannon its restoration in the 20th century, indicating it had been fired at least once. Some believe that the only time the cannon was fired was to scatter the ashes of false Dmitry. False Dmitry claimed to be son of the last remaining heir of the Rurik dynasty in Russia, but when he favored polish customs and law, the nobility and commoners killed him, burned him, ground his ashes underneath their feet and it is said that it was the Tsar Cannon, that fired his ashes towards Poland. Harsh, but likely false.

Two interesting theories on what the Zarr could be, a silly name for a pirate weapon, or a reference to a rich culture, either way, it always benefits games when creators reference real life into games, as it can create interesting, and incredibly fun to use weapons. I still don’t get why the Zarr is classified as a rifle and uses sniper ammo, you will have to ask the devs that yourselves.