These are the very best games like Portal for fans of Valve’s ingenious puzzle-platformer.

It’s hard to think back to the time when Portal an experiment that Valve bundled together with Half-Life: Episode 2 and Team Fortress 2 in The Orange Box.  Portal was an experimental part of a bundle and yet it has become something of a phenomenon and in the decade since it was released games like Portals, many of them poor clones, have emerged left, right and centre.

These are the very best games like Portal that undoubtedly deserve to be added to your game collection.

Q.U.B.E was a good puzzle game, though it’s obvious Portal influence weighed heavily on its shoulders.  Its release showed that it is more than a Portal-clone; it’s one of the best puzzle games, not just on the PS4, but on PC, Mac and Xbox One. 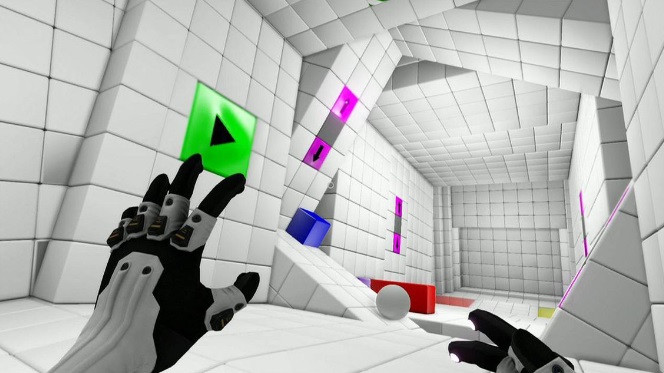 One of the key areas that Portal exceeds Q.U.B.E 2 is in the narrative; Portal and Portal 2 had a fantastic story laced with humour that gamers still speak about today.  Q.U.B.E 2 struggles to contextualize its clever puzzles with a compelling narrative, but completing those puzzles is engaging and enjoyable.  It is a must-play for gamers looking for games like Portal.

Youropa isn’t shy about its Portal-influenced gameplay mechanics.  It is undoubtedly an exceptional puzzle-platformer, with imaginative level design and interesting game mechanics.  Portal-esque puzzles are accompanied by gravity-defying gameplay to create an experience that will feel familiar to Portal fans, while standing on its own two feet.

If you’re looking for a game that you’ve likely never played, this is the game like Portal that you want to add to your wishlist.

The Stanley Parable makes this list not for its puzzles but for its humour.  Don’t get me wrong, trying to find each of the seemingly-infinite endings feels like a puzzle in itself but what many of the games lack in this list compared to Portal is the ability to get us to literally laugh out loud.

The Stanley Parable knows that it is a game and knows that you are playing it.  The narrator guides you through the world – either down the route he intends for you to take or down many of the routes he’d rather you didn’t – and manages to create an experience unlike any other.  The smirking acknowledgement that, hey, you’re playing a video game can often lead to a tacky experience.  Stanley Parable rises above that with a genuinely funny experience, rich with mountains of jokes, in one of the best-written games ever made. You will almost certainly laugh. A lot.  If you’re looking for a game like Portal, you need to try this one.

Oh, and there are some puzzles too, I suppose.

Unlike Portal, there’s no test-subject narrative behind Antichamber but that doesn’t mean you aren’t under the microscope.  Antichamber is a challenging first-person puzzler that requires you to use the full power your grey matter to progress as you wander the blinding white corridors of a space-bending facility, unpicking the cryptic clues.

Antichamber is a breath of fresh air, with new ideas that approach puzzling laterally layered with more traditional mechanics.  Plus, you get a guns that fill in voids, pick up and shoot blocks, and clear things out of your way.

Antichamber isn’t for the faint of heart – you’ll be pulling your hair out trying to solve some of the puzzles – but successfully finding a solution brings back the feelings from Portal’s absolute best moments.  Ultimately, it is a beautiful puzzle game like Portal, but tough as nails.

Where to start with the Talos Principle?  It’s an absolute joy to play, packed with expertly designed puzzles and, well, philosophy.  Yes, really.

The Talos Principle is a game of challenges and conundrums, logic puzzles and cerebral mysteries. Its mechanical processes are underpinned by a compelling narrative that tackles the intangible notion of humanity and consciousness.  It’s deep.

The Talos Principle makes this list for two reasons: its puzzles will tax you like Portal’s very best, but most of all the narrative will stick with you long after you’ve finished playing.  Few games can accomplish such a feat.

Those are our top 5 games like Portal.  To see more games like Portal, be sure to see a more expansive list at Games Finder.  Did we miss any you think should have been included?  (Please don’t say Portal 2.  I beg you.)