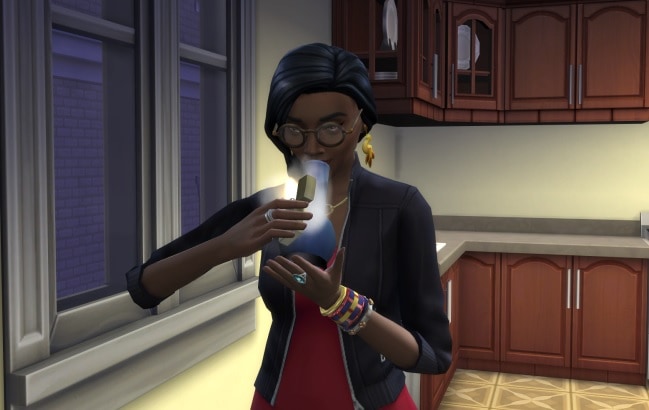 BY ZARE NARIC: Do you dream of becoming an astronaut, befriending ghosts, or transforming into a vampire? You can do all that and much more in The Sims 4, a game known for offering a wide variety of interesting activities that players can engage in.

Normally, these activities don’t include anything related to drugs, however, a modder recently changed that and now he’s making thousands of dollars from the mod in question.

The modder simply goes by the name of Filip and his mod adds various drugs to The Sims 4, which players can use for a variety of purposes. Thanks to the drugs mod, Filip is now actually making more money from donations than many actual drug dealers out there.

“Basemental” is the name of the mod and introduces things like marijuana, amphetamines, cocaine, and MDMA (sometimes referred to as Ecstasy, X, or Molly). In addition to simply consuming the drugs, players can also take part in the drug trade by buying and selling them. Moreover, the mod also adds a trait known as “drug dealer”, which is exactly what it sounds like. There’s actually a surprising amount of realism here as consuming the drugs leads to your sim becoming high and even addicted. Meanwhile, taking too many drugs can eventually lead to overdose and simply having them on your person can get you arrested for possession.

The Man Behind the Project

Filip the modder reportedly first played The Sims 4 back in May 2017 and only wanted to use the platform as a way of creating an in-game version of his kitchen, which was being renovated at the time. The modder wasn’t familiar with the game before that and quickly learned that The Sims 4 didn’t allow him to customize the kitchen like he initially thought.

His interest in the game apparently grew shortly after that when he came across a number of drug-related mods. “Basemental” isn’t the first mod to introduce drugs to The Sims 4, but all other attempts were little more than decoration mods.

Despite not being a programmer, Filip began to wonder if third-party drug assets could be made into interactive objects as opposed to mere decorations. The first step was to modify a non-interactive line of cocaine created by another modder so that his sim could snort it. Once Filip managed to achieve this initial goal, he continued to build upon the mod and eventually turned it into “Basemental”.

As previously mentioned, “Basemental” is now a fairly complex mod that brings to the table new items, activities, and gameplay features. Similar to pretty much all other games in the industry, Sims 4 modders don’t get paid for their work as they are not affiliated with the developers or the publishers of the game. Consequently, Filip opted for the donation route and turned to Patreon in an attempt to make a bit of money from the mod.

As it turns out, gamers were more than happy to help him out and now Filip is already making as much as $6,000 a month from Patreon donations. In an interview with Kotaku, the modder made it clear that he doesn’t promote taking drugs in real-life, nor is his Sims 4 mod just about getting high.

Although it can lead to some pretty funny moments, “Basemental” also does a great job at depicting the dark side of drug usage. As such, mismanaging the drugs you acquire via this mod can lead to your sims getting addicted, arrested, or even dying from a fatal overdose.

If becoming a drug dealer isn’t extreme enough for you, consider pairing “Basemental” with Wicked Whims, a sex mod created by Turbodriver. Both mods are compatible with The Sims 4 and can complement each other in some pretty bizarre ways.

At the moment, The Sims 4 doesn’t have the most well-known modding community, but if more mods like “Basemental” keep popping up, the game may join the likes of GTA V and Skyrim in the near future.