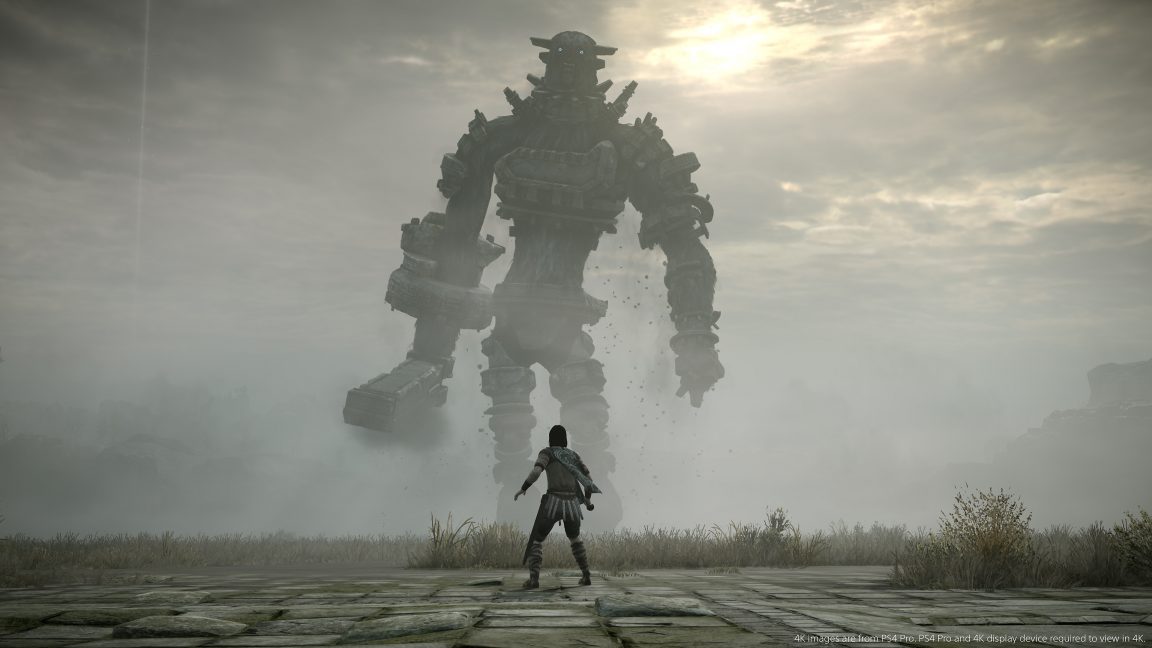 Shadow of the Colossus passed me by when it was originally released on the PS2.  I was aware of it but never played it back in the day, so when I finally sat down to play the 2018 remake it was without the nostalgic mercy often shown to classic games.

With that being said, this game is so iconic and has been discussed at such length that the plot had sadly managed to reach me before I had a chance to explore it myself. No matter, I was excited to take control of the young mysterious Wander and search this beautiful land for colossi to savagely stab to death.

The game is as staggeringly beautiful as it is emotionally crippling. Right from the opening seconds it makes a grab for your heartstrings and doesn’t let go. We join our hero traversing a treacherous mountain path on his trusty black steed, Agro, with the dead body of his beloved young maiden sheltered between his hands. I found myself hooked before the adventure even truly got started.

Upon reaching the forbidden land, our hero finds a vast central temple lined with monolithic statues of saintly colossi. A mysterious mass of black shadow people appear and make a deal with Wander to slay a number of colossi in order to bring his beloved back to life.

If a lifetime of devouring books, films and games has taught me anything, it’s that making a deal to bring someone back from the dead never ends well for all involved. Just don’t do it, people! 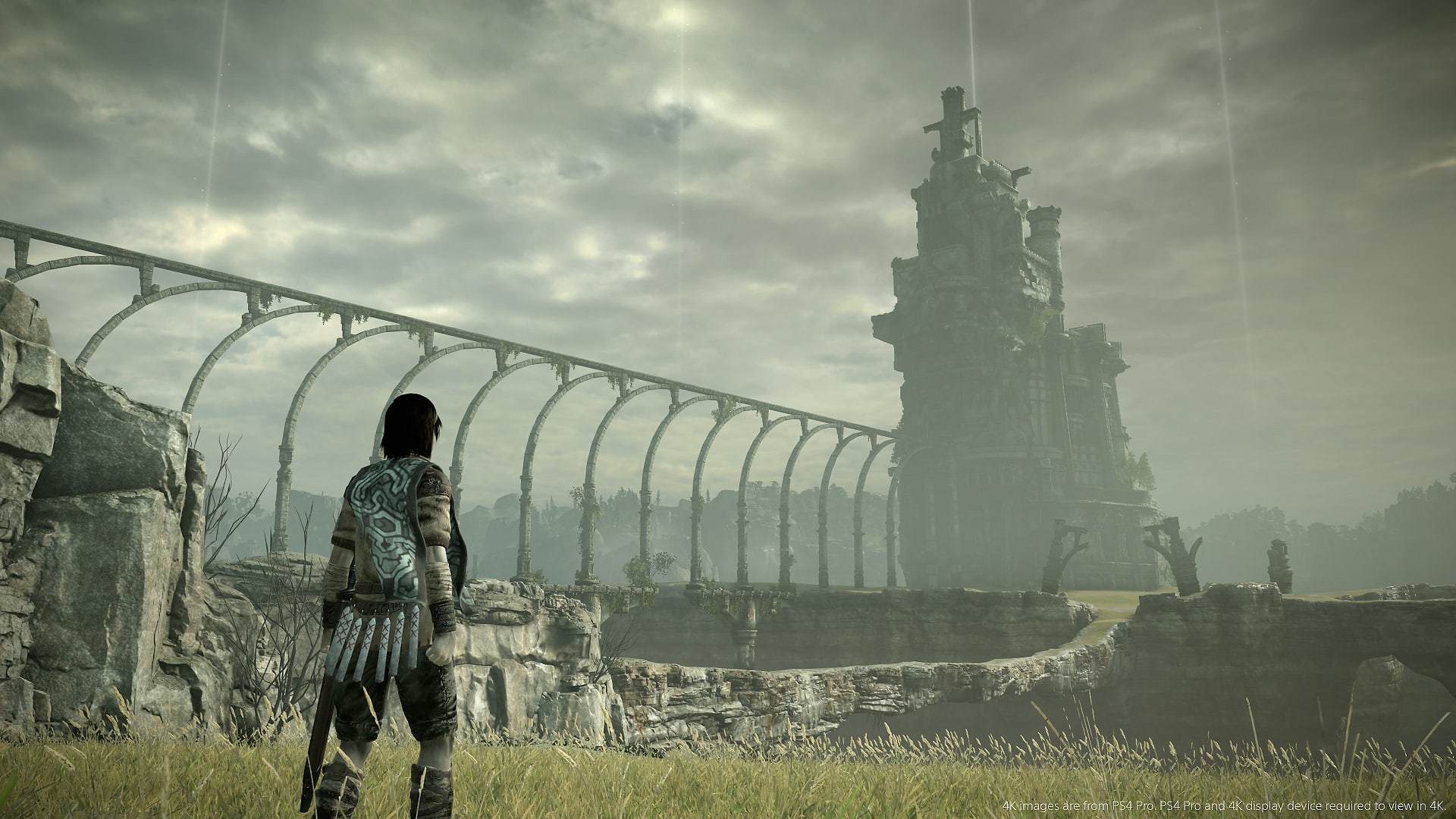 I think there are some pretty strong indicators for the morally observant players among us. For a start, the hub of the game is an extremely grand temple lined with shrines to statues of the sixteen colossi.  Let’s think about this logically for a moment and remember that no one builds temples in the likeness of the bad guys. We build temples to honour the things we worship. Wrecking up the place is undoubtedly going to turn out to be a dick move.

The distinction between a remake and a re-master can sometimes be few and far between. The 2018 version of Shadows of the Colossus is a complete rebuild from the ground up,  using new generation tech and all-new exquisitely detailed artwork and textures.  The studio behind this remake, Bluepoint Games of Austin, Texas, already has the 2011 PS3 remaster of Shadows of the Colossus under its belt. This is a rare example of a studio getting a second chance at a project and it has clearly been done from a place of deep love and respect for the original title.

The 2018 remake features a number of changes to gameplay and control systems, improving the general “quality of life”, updating PS2 to PS4 standards. Of course, a photo mode has been added too, and I even found myself lining up Wander for selfies with Agro and the Colossi – who could resist?

As important as what has been changed is what remains the same. I’m told all of the feel and mood of the original title has carried over to this remake. Somehow Bluepoint Games has managed to capture the essence and magic of Shadow of the Colossus and preserve it for a new generation.

The gameplay is a seamless mix of exploration, puzzle-solving and simple combat. It’s minimal yet highly effective and engaging. The controls are simple but at times a little unintuitive, a throwback to the games PS2 roots. A very plain and minimal hud helps root you in the exquisitely well-rendered world. At times you definitely feel that this is a title from an earlier and simpler era in game design. 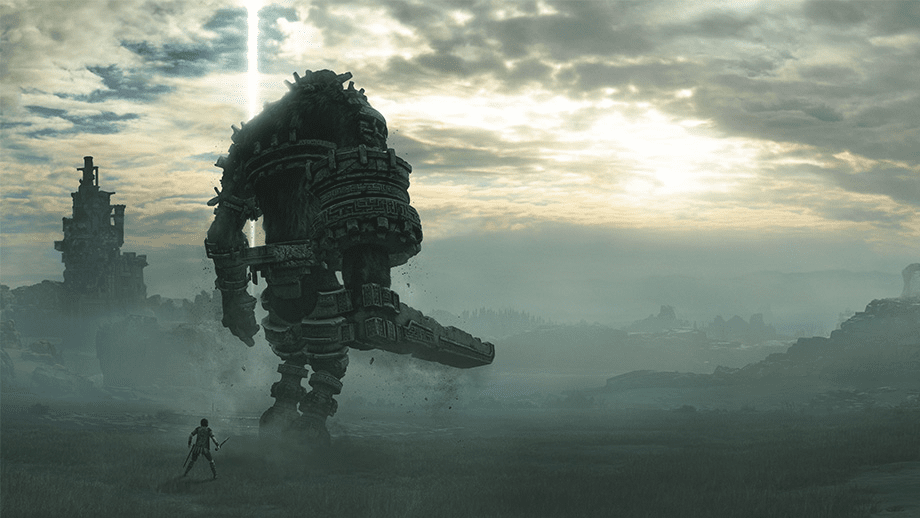 It is most certainly true that this version of the game has never looked better and has clearly been rebuilt to an exceptionally high level. The world looks simply beautiful, the changing landscapes and textures coming together brilliantly to create a truly breathtaking visually rich and vibrant environment.

As captivating as the world is, at times I still found myself wishing there was a little more going on in it. Apart from the majestic and awe-inspiring colossi, a few lizards and some fruit trees, the world is rather disappointingly and intentionally empty. That being said, would hammering in some fetch quests or a bunch of collectibles really improve the game overall?

The colossi have always been the main event and they still do not fail to satisfy. Each one of these living and often walking puzzles is a marvel to behold and a pleasure to defeat. An exhilarating and thought-provoking triumph tinged with a building sense of guilt. At several points in the game, after tens of minutes working out how to access a colossi’s weak spots, I would find myself reluctant to make the killing blows.

If I could have chosen to just visit the sixteen colossi and observe them in a friendly non-stabby way, I would have done so and let that fair maiden rot in peace. Only the knowledge that to behold the marvel of the next colossi, I must stab this one to death, kept me slaying my way through the magnificent beasts.

The conclusion of the game has a fantastically Japanese quality, an ending that leaves you with more questions than you started with, it essentially leaves you wanting more. I wanted more. Give me a DLC that brings all the slain colossi back to life, allows me to throw them all an “I’m sorry” party, and I’d feel much better about the whole affair. But alas the blood is on my hands, the guilt is mine to burden.

As much as I enjoyed this game, and I really did, I am not sure I will ever play it again. Not even the list of “new game+” unlockables will be enough to tempt me into re-slaying all those poor colossi. The combination of puzzle and combat elements in gameplay is something I would love to experience again but hopefully with less moral implications.

In 2005, Shadows of the Colossus was regarded as a fantastic game with a wonderfully told and effective story. In 2018, it is still a fantastic game with an amazing story, it just plays a little smoother and looks a whole lot prettier. The 2018 version of the game is a stunning remaster of an already exceptional title. Maybe the real question here is, how much can you really improve on perfection?