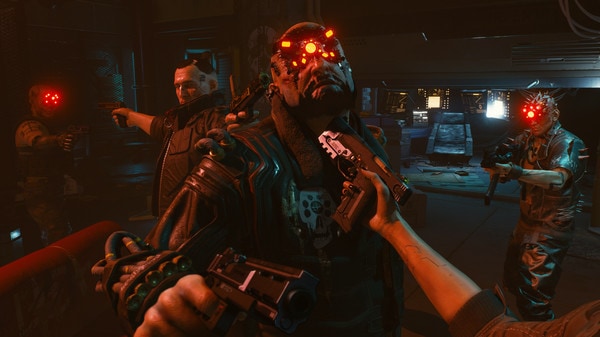 BY TOM HUGGINS: The day before Cyberpunk 2077 launched, I happily purchased my pre order as a present from my wife. It gave me plenty of time to download the game and any launch day patches in time for Christmas.

Waking up the next day to see the reviews of the game, I was pleased with my choice. It looked great and so far all I’d heard about was a few initial bugs which, sadly, are to be expected these days from a AAA title. Then Twitter, Reddit and Facebook began to fill up with the experiences of console users. It seemed like Cyberpunk 2077 was destined to join some other recent games declared broken on release. 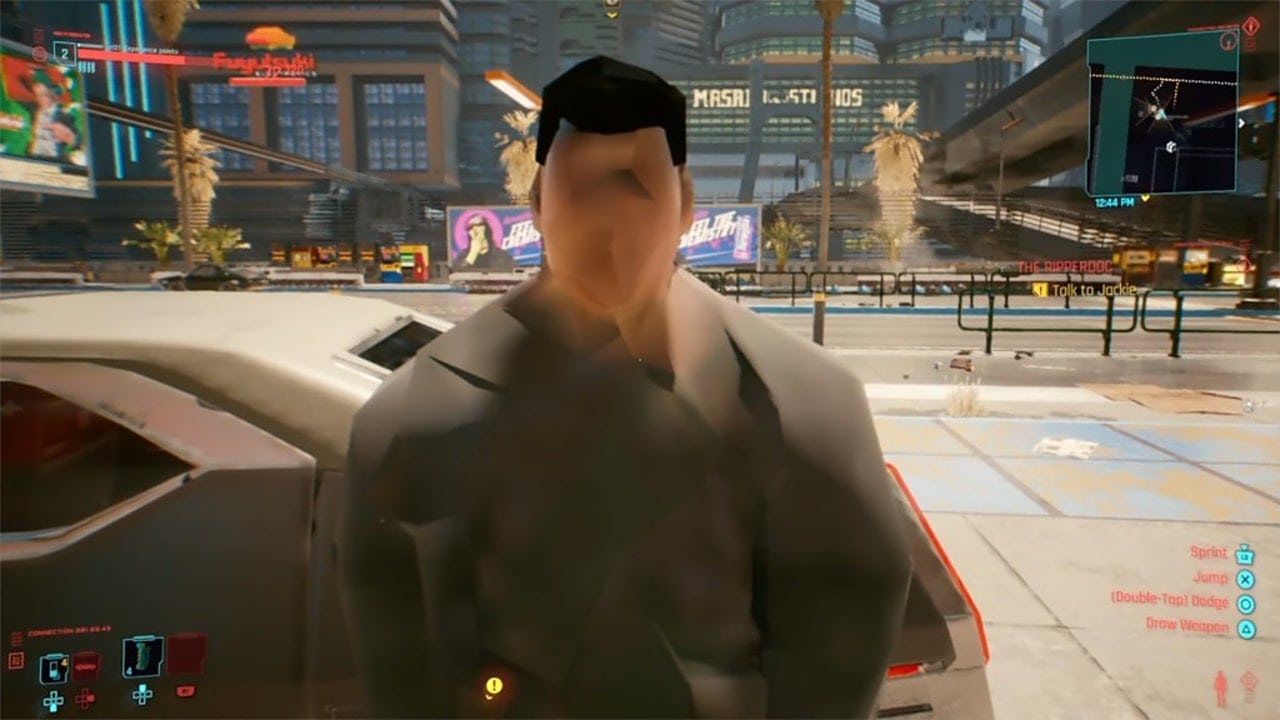 I hadn’t viewed the code that I’d bought so I contacted the online store I’d pre-ordered with to cancel. This might seem rash however, I don’t do a lot of gaming and the idea of wasting money (let alone a Christmas present) on a broken game seemed unthinkable.

Naturally, I was unsuccessful.

I was informed that the key was available in my account and therefore the ‘service’ had been provided. There was no room for manoeuvre and a loophole in distance selling laws allows key sellers to bypass the 14 day ‘cooling-off period’ that other retailers are beholden to. So, for the next few days, I watched as a small war broke out between PC users and console owners, and eventually between current-gen and last-gen console owners.

Now, unless you’ve been living under a rock, or indeed if you don’t spend as much time online as I do; you’ve no doubt seen the trouble this game has caused for its publisher CD Projekt Red. Refunds have been offered, lawsuits have been filed; and at the time of writing the game is still unavailable on the Playstation Store after Sony removed it.

Despite all this, I did eventually download the game, the day one patch, and all the patches that have been released since. So the question became, would the game run on my Xbox One S; and was it worth playing if it did?

We’ll start off with the basics, how does it look? 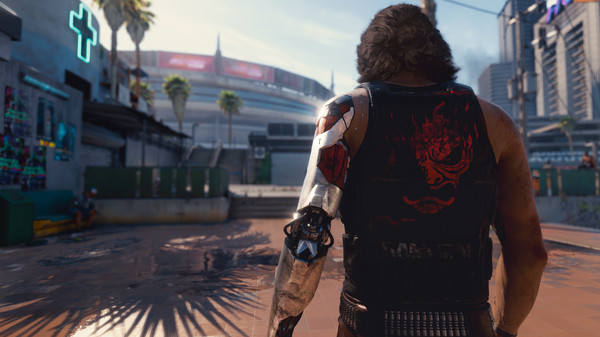 Generally, the game looks nice. It doesn’t deliver the shining, polished wonderland that the trailers depicted but then, I never expected my One S to give me the same visuals as someone with a brand new PC gaming rig. What you get is a fairly typical example of modern-day graphics on a last-gen console, it’s solid enough to be immersive but it doesn’t stand out in terms of polish.

While others may experience something different, I personally only experience graphical issues during driving sequences; but we’ll talk more about that in a minute. What you do get with this game is an excellent sense of style. There are obvious elements of Blade Runner throughout with its blend of neon over grey but that’s not the be-all and end-all. While it’s easy to see all that in Night City when the sun goes down,  I feel that it’s at its best during the day. The bright stark streets show a side of the environment that’s often left out of futuristic settings and the game benefits from it. It allows Night City to display its influences without seeming formulaic.

So, we know what the game looks like, how about getting around it? Every journey across the city on wheels is beset with textures popping in on buildings, the road, people on pavements. The first time I played the game I was taken down by the cops, for running over an NPC who popped in just ahead of my car as I drove over a crosswalk. Driving sections are also the only time I’ve experienced frame rate issues.

I want to make it clear here, I haven’t measured the frame rate while playing at all; but whether walking around or in gunfights everything has moved smoothly and fluidly. Getting in a car changed that drastically, any acceleration meant the framerate immediately dropped to almost nothing. The car lagged badly enough that I began to have flashbacks to playing online shooters over dial-up. What has seemed to help is driving with a 3rd person view and oddly enough, I found performance improved slightly when I disabled Picture Mode in the settings. Since doing this, I’ve still experienced graphics issues while driving but little in the way of frame rate issues.

This might not be the popular opinion at the moment, but the place this game really shines for me is the combat. On the service it’s as generic as any other looter shooter, your guns have numbers attached, you find new versions with better numbers as you go. When you hit an enemy, numbers fly off them along with the blood (although the numbers can be turned off) and eventually they drop. If you’ve played Borderlands and games of its ilk, you’ll already be familiar with the way combat looks in Cyberpunk. The way it feels however is something else entirely. The first gunfight I found myself in was a rescue mission of sorts and it took place in a large apartment. I was cramped into a small space with Jackie (your initial sidekick), the corridors and doorways were tight and a lot of bullets were flying at us. As I approached a doorway, I noticed that the closer to the corner I got, the more V started to lean out. The ability to lean out from cover might seem like a simple thing to those experienced with FPS games but it’s employed excellently here. This mechanic makes the experience of moving from room to room, and cover to cover a fluid and sometimes intense one. It’s a near-perfect representation of the way any cop, mercenary or soldier is shown to move in Sci-Fi.

We’ve covered the setting, combat and travel. Let’s talk a little about the story.

Again, on the surface, Cyberpunk’s story isn’t ground-breaking in terms of Science Fiction. When you get a little deeper however, there are some incredible layers to it. I don’t want to say too much here and spoil it for those who haven’t played yet, or who are maybe hanging back on purchasing so I’ll go light on the details.

The story deals mainly with loss. Loss of loved ones, loss of humanity and ultimately; loss of self. Grief and the anger that comes with that and the things it could make someone do also feature heavily as themes. Obviously, it does this in as bombastic a way as possible; the way things play out are as over the top as they could be but that works in the setting. Somehow, the storytelling is balanced enough however that it manages a high level of sensitivity where death is concerned. There’s a funeral scene that provides a lot more than ‘press F to pay respects’ and even when gunning down a Cyber Pyscho, you can find details that make you wonder if it could have gone another way. One of the few downsides for me is the lack of choice in a lot of encounters. Those of you who have read my article on Knights of the Old Republic will already know how important I feel that is, and its absence from this game was a surprise given the flexibility I experienced in the Witcher 3. 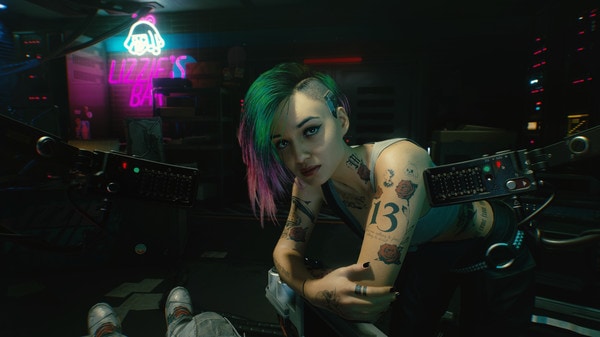 V works well as a protagonist and interestingly, they’re not an empty shell for you to inhabit. So far I’ve played through as a Female V and the voice acting is excellent. Far from the usual all badass all the time/batman growl approach, there are times when V is genuinely afraid and desperate to fix what is happening. Despite this, it never takes away from the times when they know they have the upper hand and can throw in a little intimidation. While I’m sure that won’t be to everyone’s taste, I’m a big fan of humanising a player’s avatar and giving them a distinct character.

No matter how deeply you want to take the story, you can always be distracted by Keanu Reeve’s Johnny Silverhand. Terrorist or freedom fighter, obsessive romantic or revenge driven narcissist; that’s up to you really. Reeve’s performance lets you decide on your own but either way you feel about him, the acting could be said to match it.

Yes, this game experiences a lot of bugs on consoles. Cars clip in and out, crash into invisible barriers and their drivers pop through the ceiling. Civilians try to use random objects as vending machines and during one set piece, I was firing from the passenger side during a car chase, but the gun didn’t load in. This made it look like V was firing bullets out of their wrist which took what should have been an intense action sequence, and made it an immersion-breaking bit of nonsense.  So far however, I’ve experienced 2 crashes (which is nothing compared to the experience of some). The 1.06 patch seems to have corrected any game-breaking bugs that were reported early on. 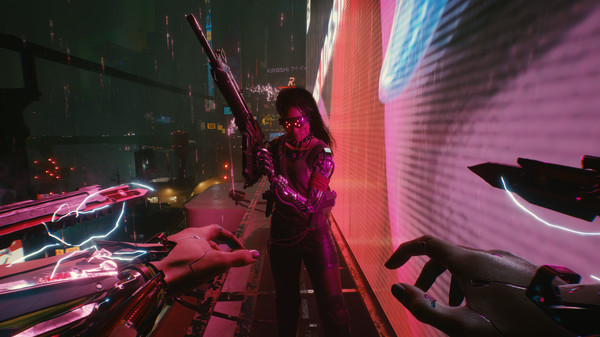 Overall, Cyberpunk 2077 is not the game that CDPR promised. It’s an RPG only in the sense that you can level up character traits and skills, otherwise it’s fairly linear. That however doesn’t stop it being a great game. It’s fun to play and when you’re really into it, the visual issues and bugs mentioned actually become fairly easy to ignore. The story is interesting and has kept me interested in the characters I’ve met and I’m still enjoying every fight I’m in just as much as the first. Right now I’d give the game a solid 7/10 but that could change as CDPR continue to release patches and updates.