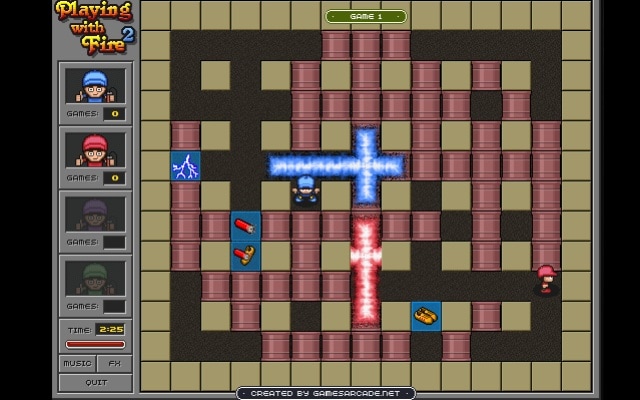 BY YASHNA SHETTY: Squished together on one seat, it really was a wonder how we didn’t start immediately fighting, god knew, every other aspect of life seemed to be a fight club initiator. Most likely it was that all attention was now focused on the brick of a PC in front of them.

Playing with Fire 2 flashed across the screen, our hands lay, ready, over our allocated halves of the keyboard. The only time my older brother and I weren’t fighting. This was my introduction to PC gaming at 6 years old and it was a good one.

A fast-paced 2D Bomber Man type-beat of a game, there’s truly no shortage of entertainment. I remember being able to sit in front of that computer screen for hours at a time, and considering each round only lasted about 5 to 10 minutes and I was a rabid, easily distracted 6-year-old, that’s wildly impressive.

The aim of the game is simple: be the last one left standing. Pick up power-ups to make your bombs the most powerful and effective in cancelling out other players all while avoiding being blown up by theirs, and your own.

In hindsight, my view of the game may be shaded in the rosiest of glasses; with AI far too easy to defeat, a limited amount of maps- three- and a small variation of power-ups to choose from, the game could grab my attention for a maximum of 3 rounds now. In saying that, the ability to add a second player to the game does spice things up a bit. I mean, it’s always a lot more fun to try and kill your friends rather than a computer-generated AI, right? And in my case, my brother!

It was a simple game, for a simple time, and despite my spending hours trying to master the art of strategically placing my bombs to annihilate my competition, little did I know, it would forever ingrain itself as a piece of my childhood.