Biomutant is a post-apocalyptic game with raccoons that know kung-fu.  What’s not to be excited about?

Developed by Experiment 101 and published by THQ Nordic, Biomutant’s ridiculous premise is intriguing and it looks absolutely gorgeous.  But for those of you on the fence, here are 6 reasons you should be excited about Biomutant.

1. The Character Customisation Options Are Extensive

Biomutant puts the genetics of your raccoon-like avatar into your hands from the get-go, letting you recode their genetic structure to change how they look and control.  Rather than choosing simply balancing a list of stats, you slide around a body type chart.  While this changes how your mutant appears, it also determines how your character handles along with their strengths and weaknesses.  Sure, it is the speed, strength and durability stats that you’ve seen hundreds of times before, but it is cool to see the way that your mutant looks feed straight into how they behave in-game. 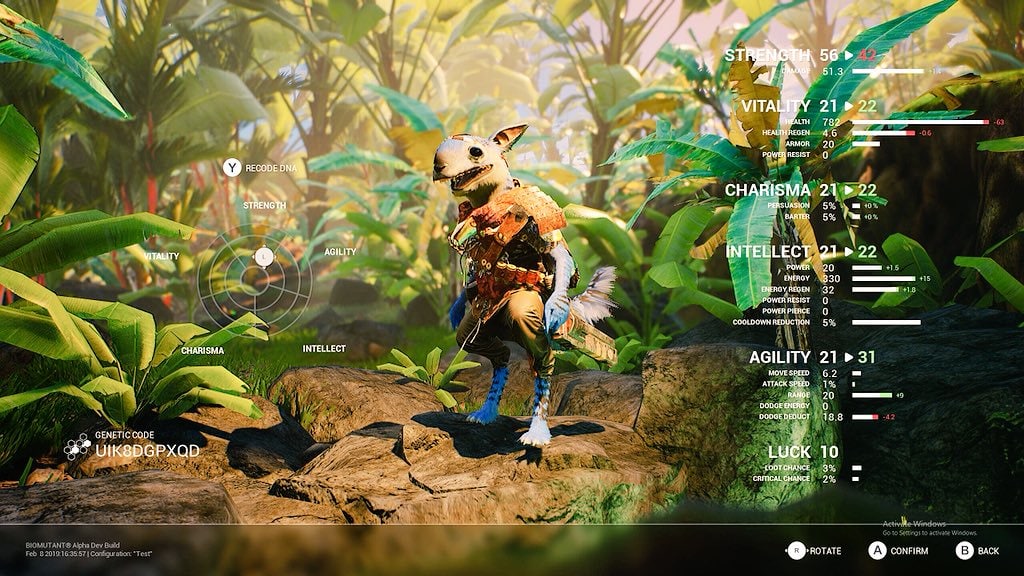 The customisation options don’t end there.  After you’ve added claws, barbed tails and wings, you can head out into the world to earn “psi-mutations” including telekinesis and levitation, or add robotic limbs to create a cyborg-like mutant monstrosity.

As players go on their own adventures their creatures will mutate to reflect their journey, so we should see characters that look and control very differently from each other.

Biomutant is billed as a “Kung-Fu fable” and the gameplay seems to reflects that.  The developers have emphasised the importance of player freedom, and the martial art-style combat mixes shooting, melee and power from mutations into a unique concoction.

In-depth progression systems and the ability to learn new skills from characters in the wild will ensure that players always have another upgrade to aim for while keeping the combat feeling fresh.

Biomutant gives players total freedom when crafting weapons.  Parts can be mixed and matched to create bespoke one-handed and two-handed firearms and melee weapons, including revolvers and shotguns.  Players can continue to modify their arsenal with items found in the world, or by completing quests for specific characters out in the world.

Here’s to hoping that rarer weapon upgrades aren’t hidden behind loot boxes or other paywalls.

Biomutant tasks the player with saving the New World as a deadly plague ruins the land and the Tree of Life slowly bleeds to death.  Sounds kinda like if my daughter’s guinea pigs were tasked with saving 2021.  As hope dwindles, the six tribes that inhabit the world stand divided and all hope seems lost.  Until you come to save the day, that is.

A key objective is to defeat enemies gnawing at each end of the Tree of Life’s roots while forming alliances and defeating some of the tribes.  Expect to be challenged by both strength in numbers and the brute power of the more fearsome enemy types. With an epic overarching story and failure potentially having catastrophic consequences, the player’s actions play a major part in the unfolding narrative.

With the player given the agency to decide what direction to take the adventure in next, expect to see players trading tales of their own journeys through the New World.

Biomutant’s New World setting looks stunning and captivating.  The post-apocalyptic universe conjures up memories of Enslaved with its bright colour palette, though not all areas adhere to this.

The expansive open-world boasts a variety of location types to explore, discoveries to make, mysteries to unravel, characters to meet, and enemies to defeat.  Expect to explore everything from damp underground tunnels to lush green landscapes and icy mountain tops.

Traversing the world via mechs, paragliders, balloons, area-unique mounts, boats and more will ensure that travelling and exploring is rarely a chore.  It helps that the world looks so darn pretty, too.

6. The Developers Know How to Deliver Exciting Games

Biomutant is being created by Experiment 101 and published by THQ Nordic.  Cast aside thoughts about THQ’s ridiculously buggy and flawed WWE releases for a moment – the Experiment 101 team is comprised of developers behind Mad Max and Just Cause.

The Experiment 101 team knows how to deliver action-packed open-world adventures, and with a unique, furry spin on the post-apocalyptic genre to set them apart from the competition, they could create something truly special in the aftermath of critical flops like Fallout 76 and Anthem.

Biomutant is one of the most promising new IPs on the immediate horizon as 2021 gets started.  Having been pushed back from 2020, Biomutant is now due to come out sometime after March 2021.  It will be interesting to see whether Experiment 101 deliver upon the promise that Biomutant has shown in the glimpses that we’ve been given.