BY JAYSON GOETZ: Ubisoft’s 2016 game Watch Dogs 2, much like the previous game in the series, Watch Dogs, firmly roots itself in real life locations to depict modern day hacktivism and near-futuristic forms of technology. Watch Dogs 2 takes place in San Francisco and some of its nearby locales.

Because Watch Dogs 2 and its predecessor are firmly rooted in information technology and hacktivism, it’s no wonder that the second game in the series would take place in San Francisco and Silicon Valley. While in-game, the player character can easily visit some fictionalized versions of Oakland and Marin in addition to the Bay area and Silicon Valley.

Most notable is in the game’s depiction of Mountain View, where players can find a suspicious “nudle” building, with a logo designed in a familiar multicolor fashion. This is Ubisoft’s parody of the San Francisco campus of Google, which even includes Google’s famous self-driving car, although it’s not so self-driving within the game. 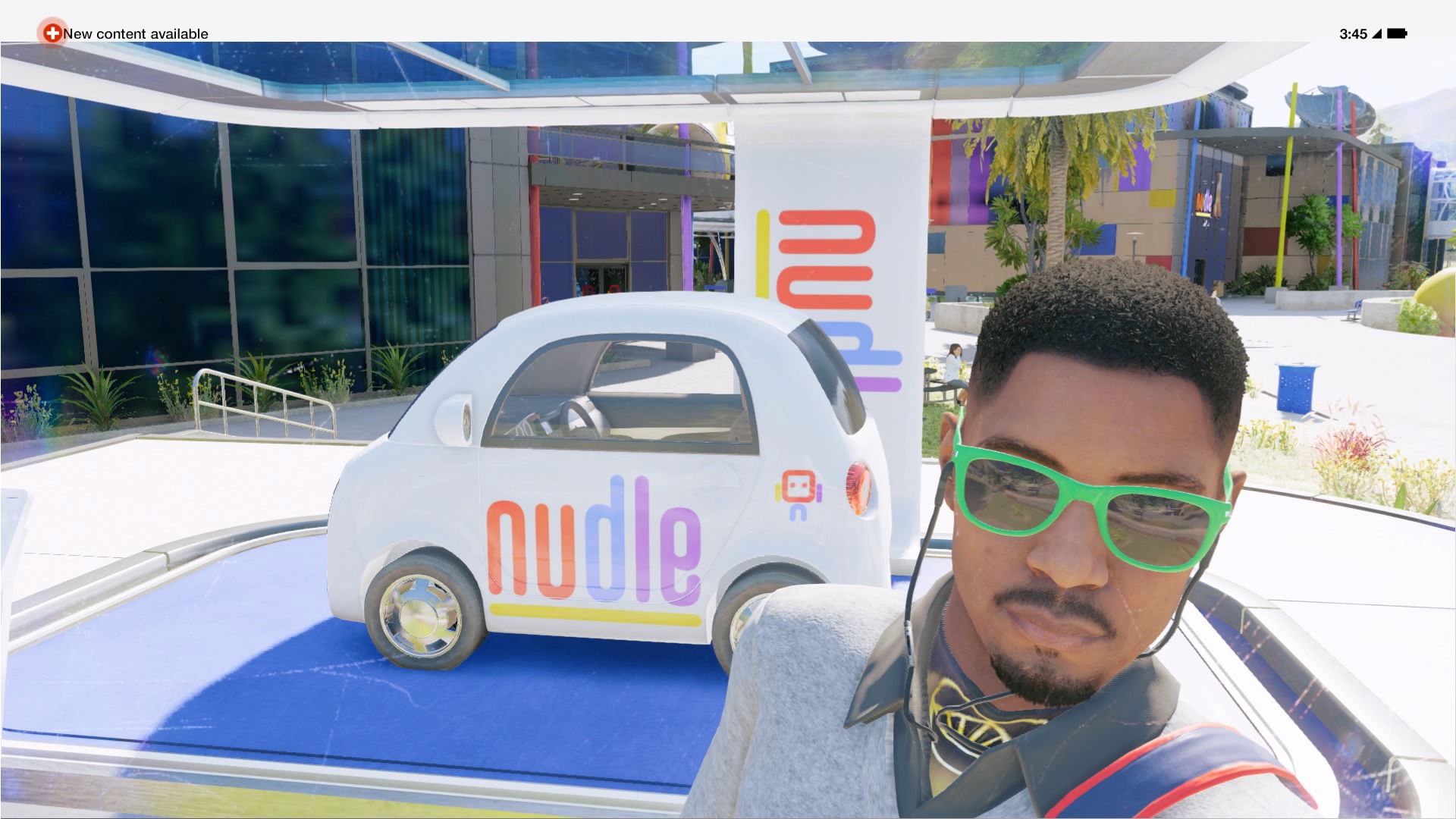 One of Google’s other San Francisco claims also shows up in-game, as the historic site of Hangar One is under control of the fictional company of Galilei in-game (a transparent parody of Elon Musk’s SpaceX), and leased by Google from NASA in the real world.

One of the areas that Ubisoft took a little more liberty in depicting in Watch Dogs 2 was the famous sculpture called Cupid’s Span, commissioned by the founders of GAP, the clothing company. In real life, Cupid’s Span is a 60-foot sculpture of a bow and arrow drawn taut along the Embarcadero in the city.

However, Watch Dogs 2 takes some personal liberties with Cupid’s Span, instead depicting the sculpture as a large optical mouse, keeping with the game’s near-futuristic depiction of information technology and hacking. 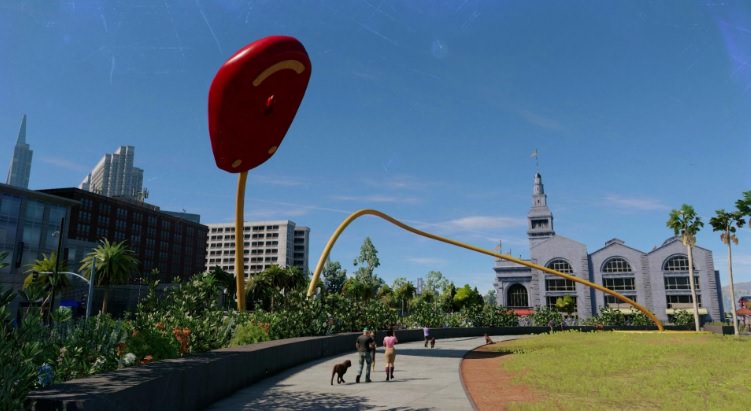 So, while you’re not able to traverse through the park underneath the wire of a mouse in real life, the park is home to a fascinating landmark in the city.

In self-referential fashion, Ubisoft couldn’t resist the chance to depict its own San Francisco offices within the game itself. 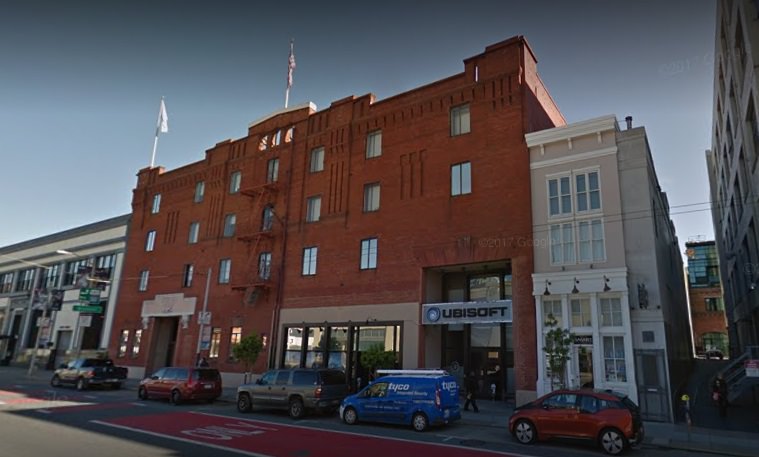 Located on 3rd Street both in and out of game, the developers clearly took some extra steps to make it a bit more impressive for players to see than the average real-world pedestrian. 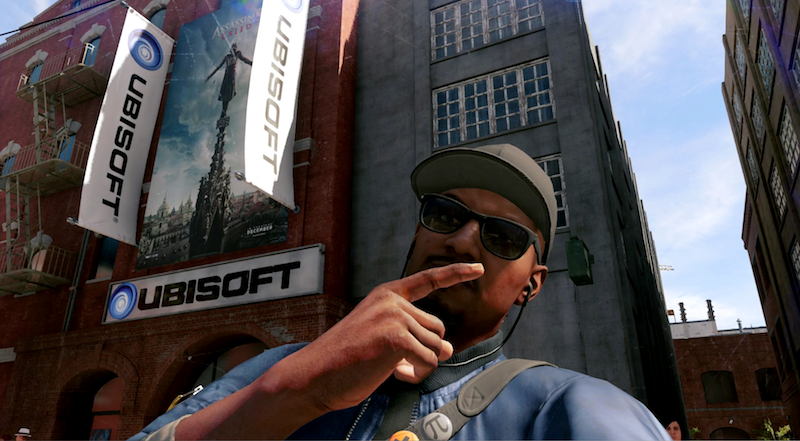 A large poster adorns the entrance advertising the release of an Assassin’s Creed game.

San Francisco’s Fisherman’s Wharf makes an appearance in the game, functioning just as its real-life counterpart as a tourist destination.

You can stroll up and down the waterfront both in-game and out, although plenty of the tourist destinations are more interesting in their real-life capacity than in the game. The wharf is home to museums like the Ripley’s Believe It or Not museum and the Musée Mécanique, a functioning antique penny arcade. The wharf is also home to street performers and a decommissioned World War II submarine, the USS Pampanito, which is open for public touring.

The wharf is home to plenty of restaurants and food, though has a strict no fast food chain policy, that has only been broken once for the addition of an In-N-Out Burger, which is locally owned.

Watch Dogs 2 does some impressive depictions of the San Francisco area, although the game does come with some limitations. One of the smaller details people not native to the city probably wouldn’t pick up on is on the city’s world-famous Golden Gate Bridge. Watch Dogs 2 depicts the mile-long span across the Golden Gate with two lanes going in each direction, but the real life Golden Gate has three lanes. 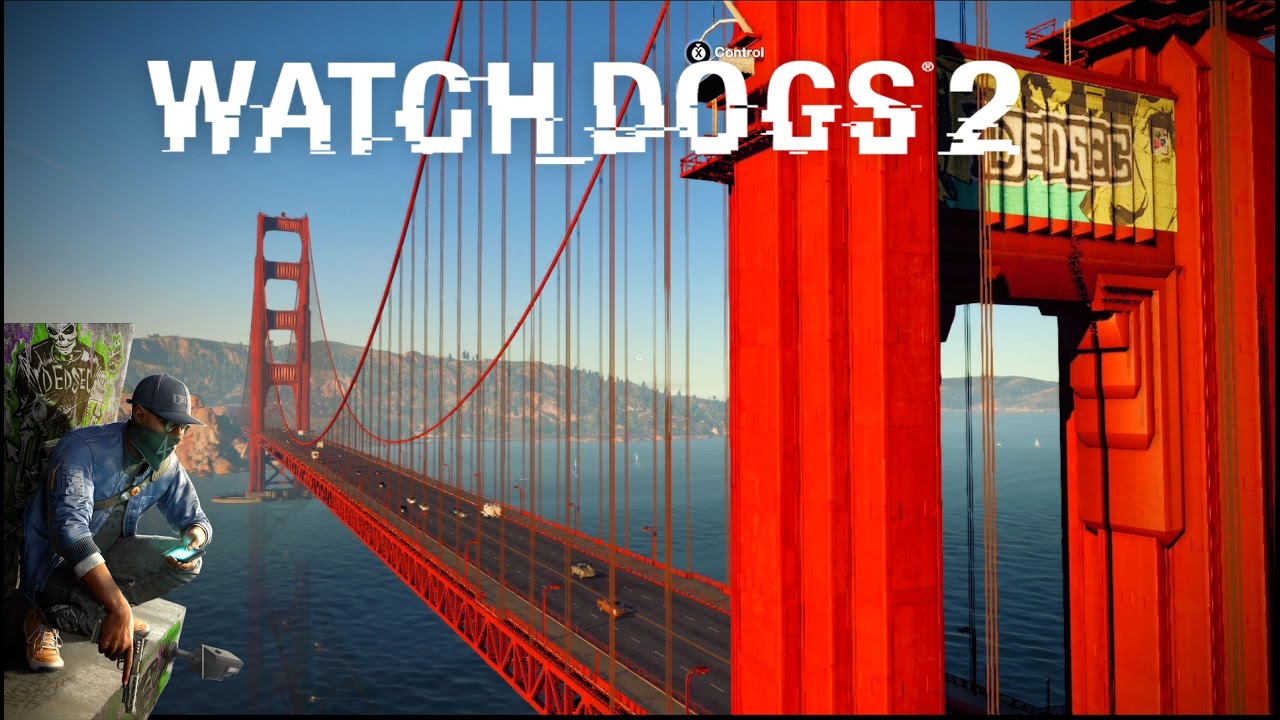 It probably comes as a result of the game’s necessity to compress the area. It’s much easier to traverse the San Francisco area within moments in the game than it is in the real San Francisco.

The infamous island of Alcatraz also makes an appearance in the game, even manned with its own and tours and tour guide.

The island is accessible to players via fast travelling, providing the real-world analog of necessitating a ferry to visit, because it’s situated in the middle of San Francisco’s bay.

Much like the real island, it provides a stunning view of the city while also being a rather run-down and decaying tourist destination, as the prison hasn’t been in use for over half a century.

There’s a lot to do in San Francisco for the adventurous gamer, and you can make it a point to traverse all the locales that Ubisoft painstakingly recreated in Watch Dogs and compare.  If you liked the adventure through San Francisco and Silicon Valley that Watch Dogs 2 provided, then it’s a perfect starting point for your next vacation destination. Whether you actually map out the spots from the game you want to see or you let the discovery be incidental, there’s so much to do in the area that you won’t want for entertainment.