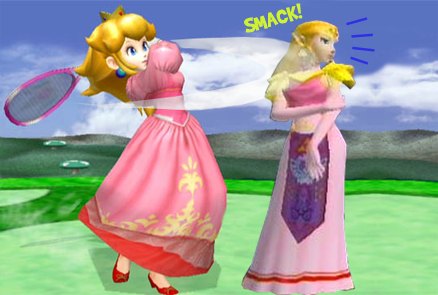 My birthday in August 2017 was marked by the purchase of a Nintendo Switch after almost a year of waiting. I went to Gamestop to purchase the console and was offered a bundle deal. Instead of the case, I decided to get two games, Breath of the Wild and Mario Kart 8, with more than a little excitement.

I hadn’t played Legend of Zelda in years other than the DS version of Ocarina of Time I’d been playing off and on for quite a while. I had some thoughts about Princess Zelda after playing over 600 hours in the past year.

This got me thinking about Princess Zelda and Princess Peach; both have needed saving by their respective heroes in a variety of wonderful games.  But, which princess is the best of the two?

I believe Princess Zelda is better than Princess Peach. While I know there are people out there who won’t agree with me, I wanted to share the rationale behind my decision.

One of the neatest things I saw in Breath of the Wild, as a feminist, is the fact that Zelda held Ganon in the castle herself. She sacrificed her physical body to keep Ganon locked in the castle so it wouldn’t be able to ravage any more of her lands. She kept the fight locked within the castle to keep her people safe from harm. She even managed to get Link to a safe place so he could recover from his grave injuries after the first battle with Ganon.

She is a strong princess and knows how to stand her ground in the way a strong woman should. She worked so hard for the powers her father wanted her to have even while he was still alive. She knew what she was capable of and worked her behind off to unlock the powers she knew were hiding within her.

She did not ask anyone for help even when the times were grim for them all. She knew only she could help defeat Ganon once and for all. She knew she would need Link’s help but didn’t ask for it at any point. In fact, she was resentful of his silent presence in her life for the longest time.

The only time she got any help was during a flashback when it is revealed that Link saved her life from a couple of Yiga Clan foot-soldiers. She didn’t ask him to do that even as she was running for her life. For me, she is the epitome of a strong woman and one we should all look up to these days. Yes, even though she is a fictional character that we can’t meet face-to-face.

2. She refused to be kidnapped

One of the hardest pills to swallow these days when it comes to video games is all the times Bowser kidnapped Princess Peach in the Mario franchise. Peach would almost LET Bowser kidnap her, which has never sat well with me. However, the major difference between Princess Peach and Princess Zelda is the idea that Zelda would not allow Ganon to do that at any point.

Even when he does manage to kidnap her – Ocarina of Time comes to mind here – she did not allow it to happen without a major fight between them. This is what I see in the dictionary beside the definition of a feminist. In Breath of the Wild, Zelda went to Ganon of her own free will. She may have seen that it was inevitable, especially after Link falls in battle, but she went of her own free will.

She made sacrifices that would make a lot of us pause where we stand. She knew her decision would end up being for the greater good, which is what I can now see loud and clear. She did not allow Ganon to trap her in the castle against her will: she locked him there. She knew her people would be safe if she battled him within the walls of Hyrule Castle so that’s what she did. Even when she knew the odds were against them and in Ganon’s favor.

Another thing I thought was absolutely awesome is that she gives you a weapon at the very end of the game. This weapon, a bow, is powerful enough to defeat Ganon in his final form while your other bows won’t harm it much. She goes as far as to use what’s left of her powers to make sure Ganon has weaknesses you can exploit with the bow.

If you look closely at the Mario franchise, you’ll notice how many times Princess Peach stands by and waits patiently for you to rescue her without helping you. I think this is more of a position difference between the princesses. I believe Princess Zelda has more power with the Triforce of Wisdom than Princess Peach ever had.

In this way, I think Princess Zelda is stronger than Peach in my opinion. Getting Breath of the Wild in September 2017 brought more excitement than I can express right now. It’s definitely worth the money for those who are wondering whether they should play it!