BY MATT BOWEN: As another autumn comes to a close, so does another autumn Steam sale. And with that, another opportunity to add to my raging singularity of a backlog that threatens to devour the entire bloody market. This time around, a certain little Microsoft title had caught my eye.

Sunset Overdrive’s most notable element going in is the fact it was developed by Insomniac Games; yes, the same people behind Spyro, Ratchet and Clank and Spider-Man had a brief stint with Microsoft, whereupon they created this odd little gem. It didn’t nearly sell as well as they hoped, though, sort of like most Xbox exclusives. Ever since it made the jump to PC, though, it’s been able to reach a far larger audience, and at only £3.74 on sale, I figured “what the hell?”.

The world of Sunset Overdrive is, well, an open world. I guess it is that generation of gaming, after all. Fortunately, I’m about 3 hours in and the map hasn’t been blasted with a map marker shotgun like the sorts of open worlds Ubisoft loves to feed players. Just a few clearly marked side-quests, challenges, and whatever plot thing the game wants me to do next. 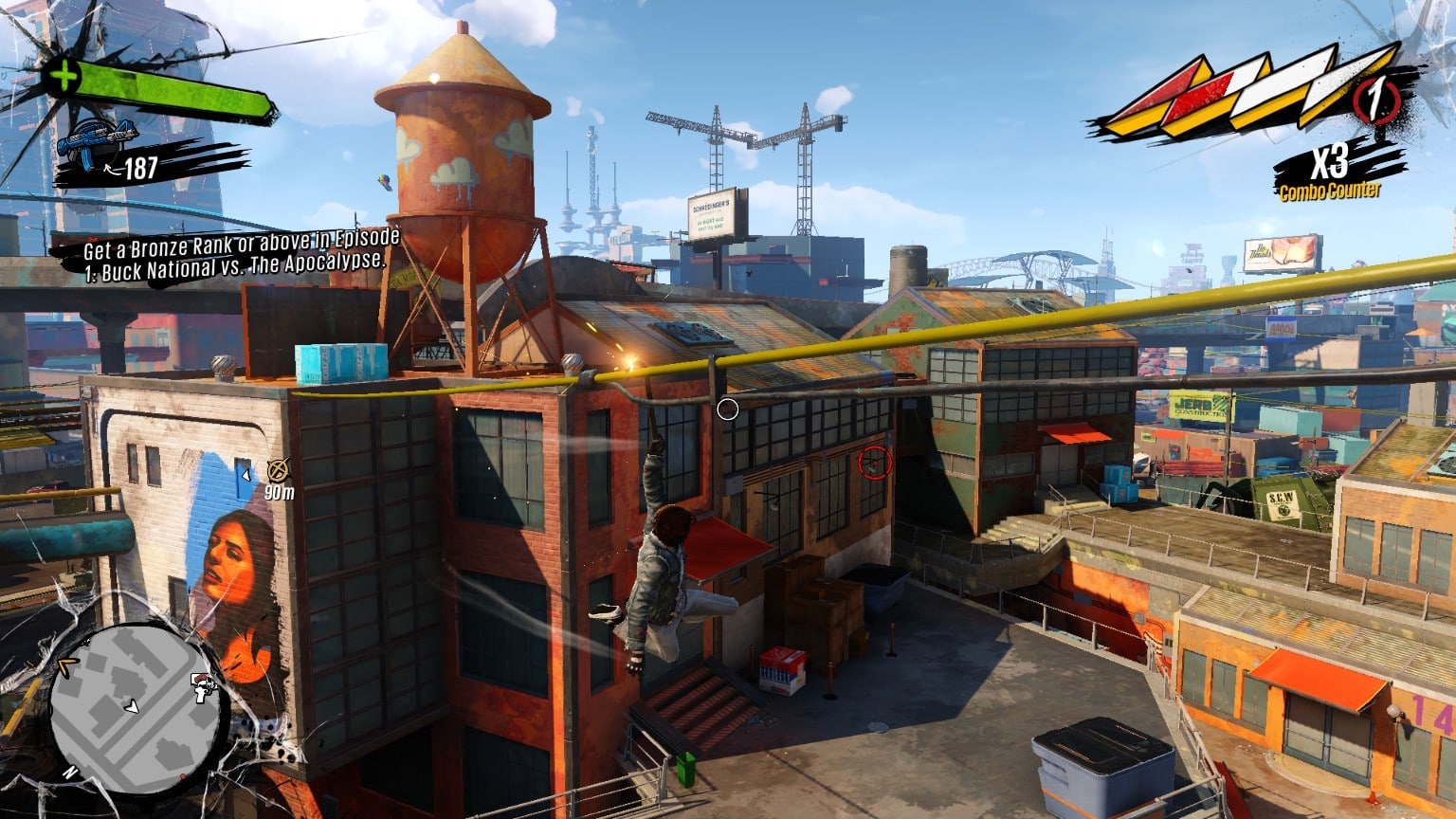 What sets Sunset Overdrive apart from basically anything else is the way you traverse this big open world: from bouncing off of cars, vents, and general bouncy things, to grinding across literally anything that looks remotely grind-able – all while shooting mutants in as stylish a way as possible. Taking all these elements into account, the closest comparison I can draw is 2005’s Shadow the Hedgehog, except we’re laughing with the game, not at it.

Of course, I say laugh with – the premise of the game is pretty silly. An energy drink gone wrong turns almost the entire population of a city into mutants, who basically bring about a mini-sized apocalypse. Your player avatar (who has a surprising amount of customisation) is a survivor of this, and to get started you’re basically asked to acquaint yourselves with other survivors to obtain upgrades for your abilities and hopefully survive together against the hordes. 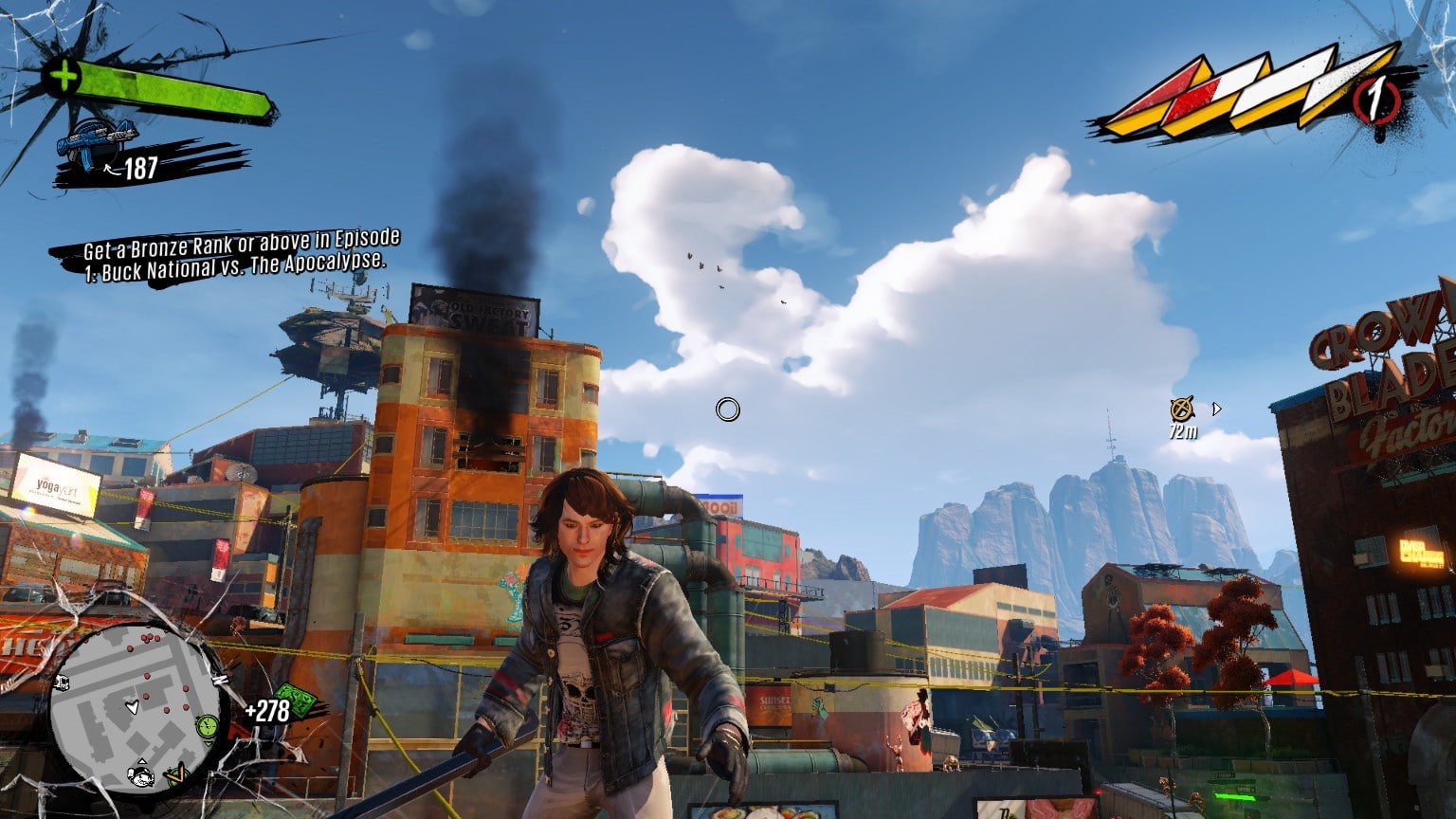 Sprinkled throughout the game are plenty of fourth wall breaks – I say sprinkled in the same way I always “sprinkle” salt on my chips; I fail to notice I’ve used way too much and it leaves a bit of a nasty taste in the mouth. From the booming voice of a narrator to the near-constant reminder you’re playing a video-game, it really stopped being funny to me almost immediately. To give some credit though, the game came out 2 whole years before the Deadpool movie, so at least they weren’t trying to ride off of that wave.

When all is said and done, it’s easy to ignore story elements and just go about playing the game, and the gameplay is fairly well crafted. As mentioned, you blast mutants from a third person perspective, and do it in as cool a manner as you possibly can, preferably getting kills in mid-air and keeping up trick combos; enough of these activate your “amps” and essentially give you even more cool tricks to kick arse with. 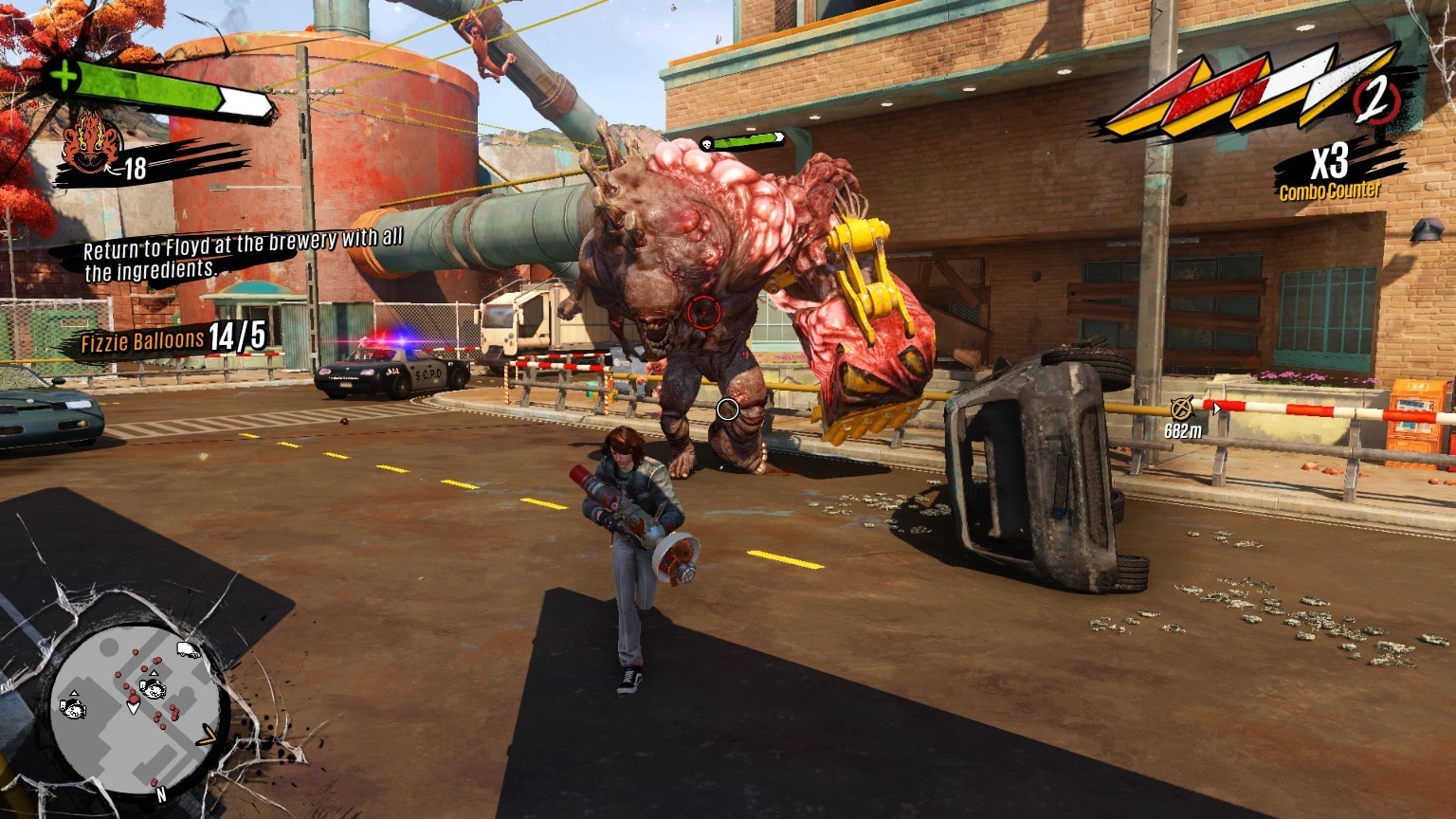 The controls to actually do all of this are a bit finicky, though. Using a keyboard works surprisingly decently, but it’s easy to hit a wrong button and accidentally screw yourself over, especially at the high speeds the game wants you to be at.

Before I wrap up these first impressions, I should probably mention the technical issues – what would a PC port be without them? The first thing this game will probably do upon startup is insult your rig of choice with a “Minimum requirements not met!” warning. I’ve heard mixed things about this: a lot of people who get this can run the game just fine, but the game can’t accurately gauge the components and gives them the warning anyway. Beyond that, some people (myself included) can still play after hitting “OK” while others can’t. The game also doesn’t play nice with anti-viruses, so you’ll need to tell your antivirus to look the other way whenever you run it. And if that weren’t enough, having “depth of field” set to “on” in the graphics settings causes some painful green flickering during some cutscenes, so keep all these little wobbles in mind if you do purchase this game.

All in all, Sunset Overdrive is looking like quite the thrilling little oddity. I definitely give it a recommendation based on what I’ve played – even if you don’t plan on finishing it, as there’s really nothing else quite like this that I’ve ever seen.