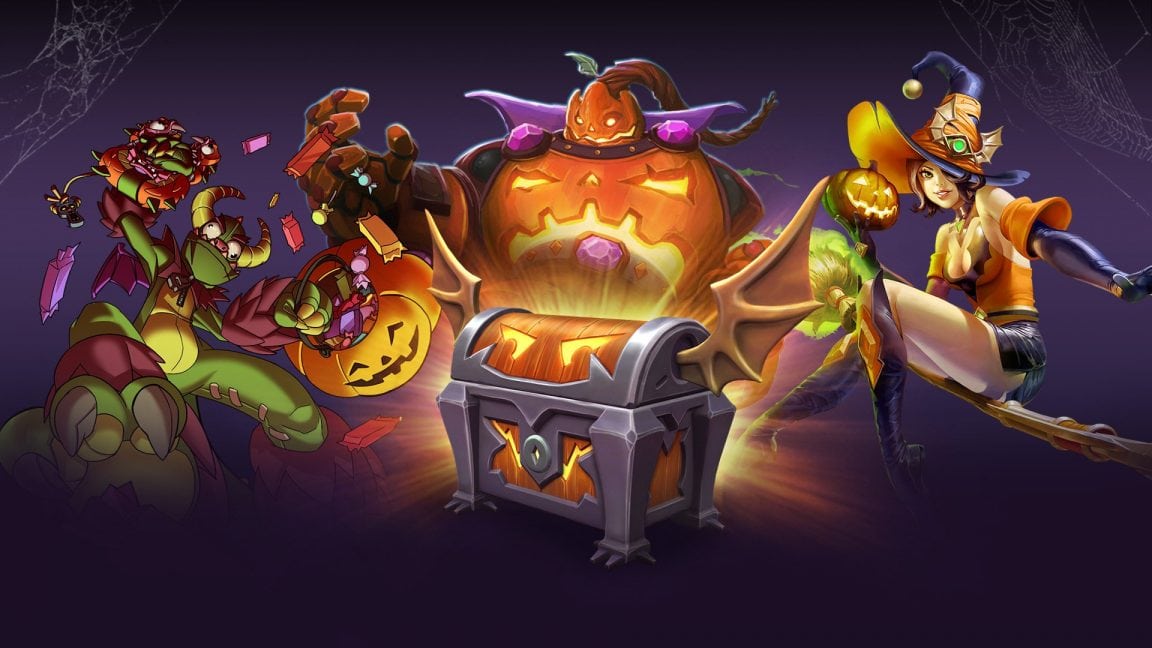 BY LEANNE WARNER:  Halloween is fast approaching and with the festivities comes spooky aesthetics for all. Like most multiplayer games right now, Paladins: Champions of the Realm is ready with different skins to customise just about all 42 characters and counting. Recently the Little Box of Horrors chest made a return to the game featuring 7 Halloween skins that we’re going to rank from most to least spooky with 5 categories and scores that mean absolutely nothing because skins are subjective.

The 5 criteria are as follows:

Each category receives a score out of 3 pumpkins which are added to make a total that determines the final overall ranking, as well as some honourable mentions at the end for skins that are also suitable for the season but sadly not included in the chest. 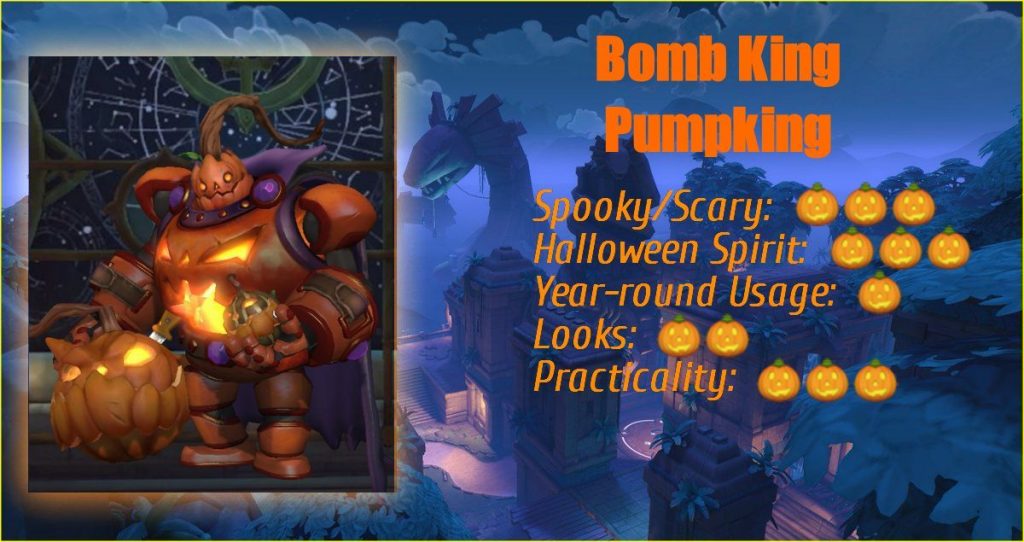 Rolling into first place with 12 pumpkins overall is Bomb King’s aptly named Pumpking skin. By far the most Halloween-oriented skin that exists in the game, the flaming face carved into the torso glares menacingly out at all who face the King, which is truly what results in the 3/3 ratings for both Spooky and Halloween Spirit. However, what it boasts in those two categories costs it heavily in Year-Round Usage where it scores just 1 lonely pumpkin. In Practicality, the Pumpking earns 3/3 for how similar it is in shape to his default, so he’ll have no trouble spreading Halloween cheer to all in the form of handheld detonated pumpkins. 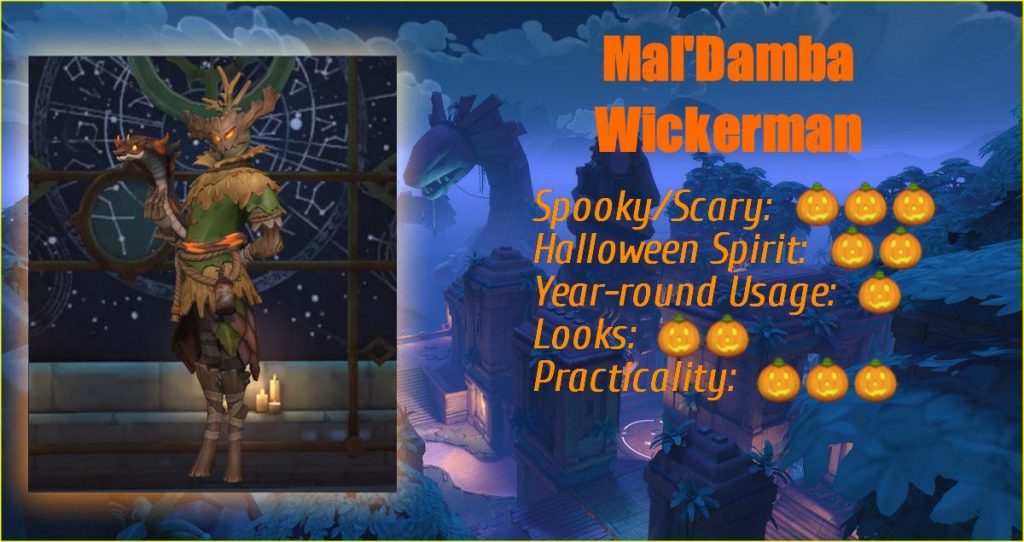 Into second place with 11 pumpkins steps the Wickerman, a skin for Mal’Damba that, thanks to its glowing eyes, horned cobra and fractured skull behind the mask, is granted 3 Spooky pumpkins and 2 for Halloween Spirit, though suffers in the Year-Round Usage department not only for being spooky but for its autumnal aura. Around his waist, the clothing appears to be made from leaves or at least intend to resemble them, while the remainder of the scarecrow-esque look conjures images of cornfields and harvest. And Skull Kid. For Looks it gets a solid 2 and, like Bomb King, a 3 in Practicality for being similar to the default outfit. 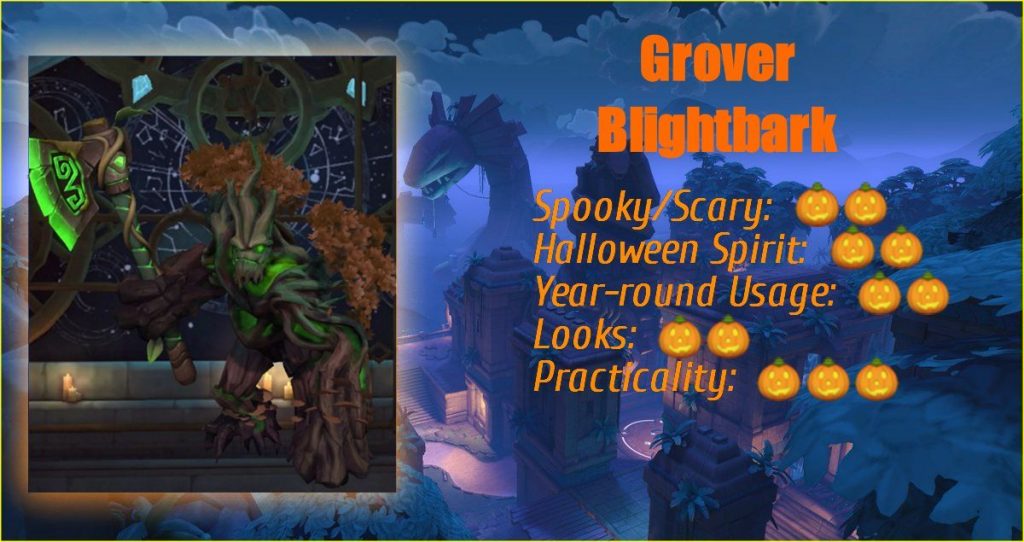 Given how simple this skin is, it might be a surprise that it clawed its way up into 3rd place, but Blightbark boasts the most rounded score of all. Sporting a haunting, ghostly green that glows from the inside out, Blightbark earns 2 pumpkins in Spooky/Scary and Halloween Spirit and brings to mind instances in which trees struck by lightning burn only on the inside, visible through holes that look as though windows to hell have been, briefly, torn open. Looks and Year-Round Usage also earn 2 pumpkins each which almost had it at all 2s if not for Practicality, where it achieves 3/3, yet again for the likeness to the default skin. All in all, Grover’s Blightbark is clean and inelaborate with enough charm to stand directly beside Mal’Damba’s Wickerman, both of which have 11 total pumpkins. 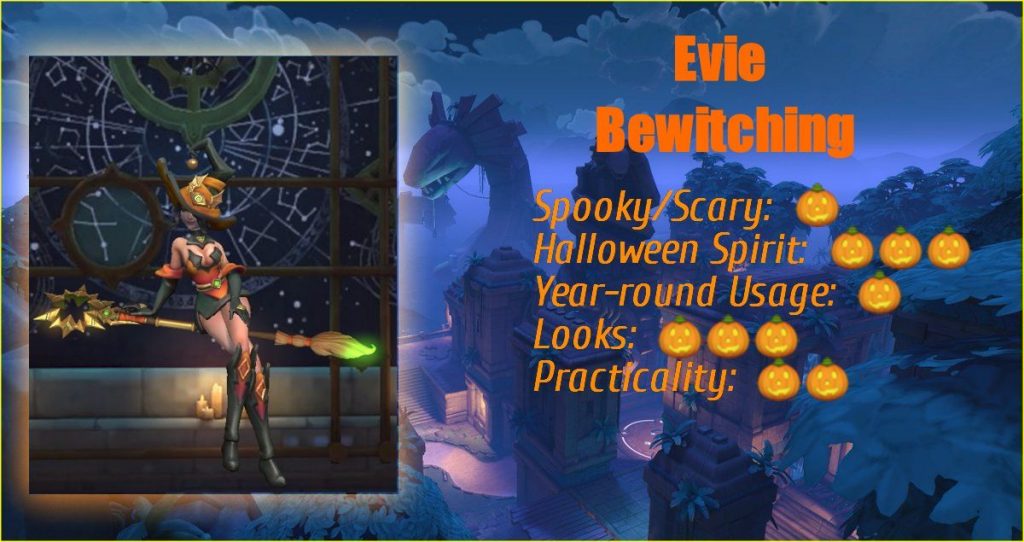 Sliding into your DMs, your heart, and 4th place is Evie’s exceptionally adorable Bewitching outfit, an ensemble most definitely created with Halloween in mind. The skin has been around since late 2017, yet its fall-time charm has yet to fade. The classic orange and black colour scheme and timeless witch’s hat earns it the maximum 3 pumpkins in the Halloween Spirit category and therefore a 1 in Year-Round Usage. Suffice to say the strapless mini-dress and knee-high boots are set to scare nobody but boys in the throes of battling puberty, and so earns just 1 pumpkin in the Spooky category. As for Practicality it’s 2/3 pumpkins with the only real obstacles being the fear of onlookers below viewing more than she had bargained for and the giant rimmed hat covering one eye. 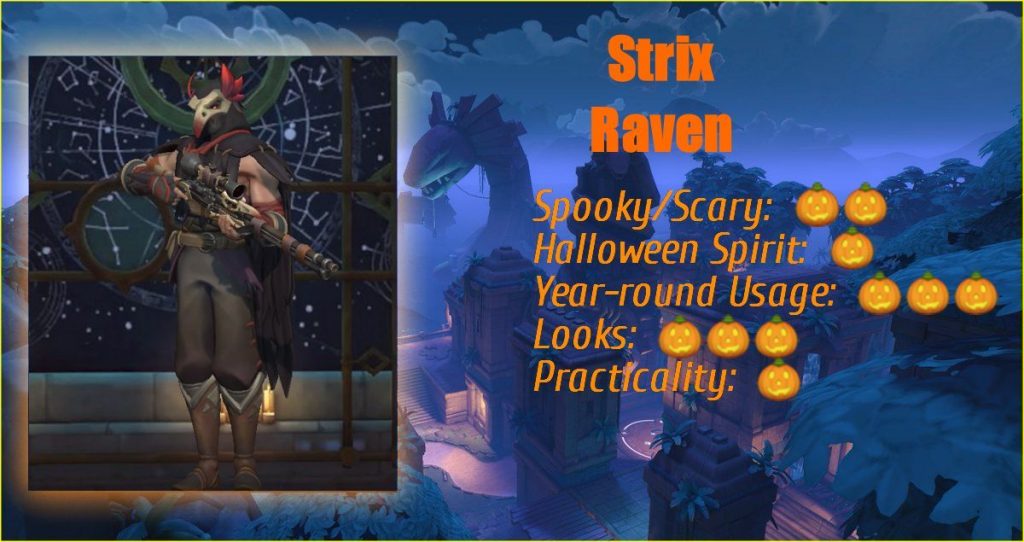 5th place sees Strix’s Raven skin with a score of 10, a simple yet aesthetically pleasing skin that clocks 3 pumpkins in both Looks and Year Round Usage. Birds are one of nature’s creatures gifted vastly in the area of sight and their skulls are built to facilitate this, and the reason this is being brought up is that Strix is not a bird. However good his eyesight may be, trying to peer out through that raven skull and then too through a scope is what earned him just one pumpkin in Practicality. Glowing red eyes and red-tipped beak help push this skin into a healthy 2/3 for our Spooky category, though falls flat on a 1 for traditional Halloween Spirit. 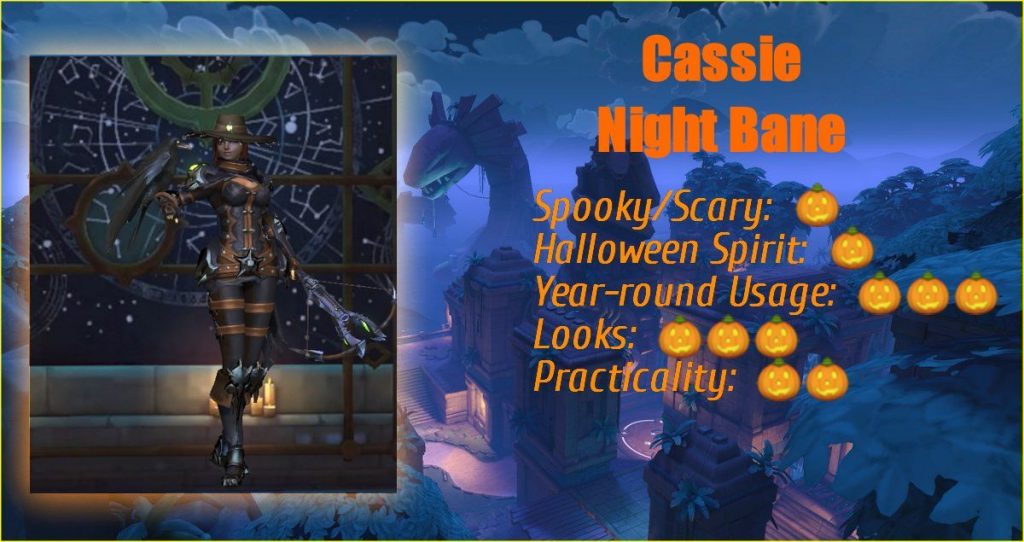 Not originally developed as a Halloween suit but not one that would be out of place at a Halloween party nonetheless, Cassie’s Night Bane swoops down to 6th place with a score of 10 total pumpkins. Cassie’s faithful feathered buddy Zigs also gets a makeover, ditching his red feathers for black ones and brandishing glowing green eyes to match the crystals embedded into his master’s Gothic outfit. The Looks and Year-Round Usage categories of this outfit are maximum at 3 pumpkins each due to its classic design, the same classic design that delivers only 1 pumpkin for both the Halloween Spirit and Spooky categories. For the second time in this list, a large rimmed hat lets its wearer down, yet Cassie is prepared for all weather including the brisk chill of Ice Mines and likewise is prepared to look good fighting there. 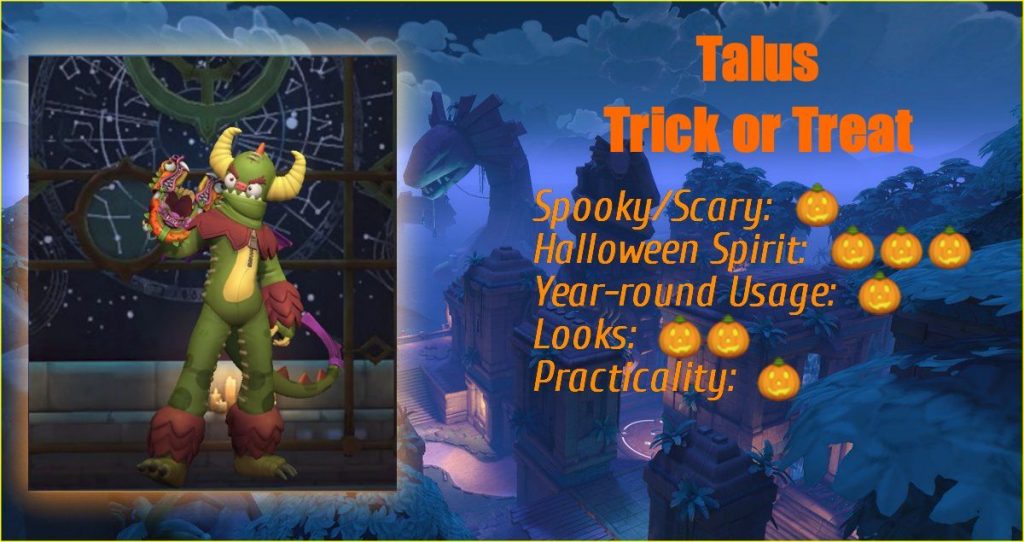 Dropping unfortunately into last place with 8 pumpkins is Talus, who is upping his trick or treat game by taking along an SMG which arguably gets results but also prison time. While he comes out strong with 3 pumpkins awarded for Halloween Spirit, that as usual means a deficit in Year-round usage with just 1 pumpkin. The green monster costume also gets him 1 pumpkin in Practicality due to the simple fact that his face is enclosed in a mask with no visible eyeholes: the boy cannot see. In addition, the suit is more cute than Spooky and so gets 1/3 in that category, but takes home a decent 2/3 in Looks, one entire pumpkin of which being devoted to the colourful dual dragon SMG.

The Little Box of Horrors is priced at 150 crystals and admittedly uses, cough, surprise mechanics, and also contains other items such as emotes, Pip’s Boo Blaster weapon, the Nightmare mount, a Tombstone deathstamp and voice packs.

Before signing off, here are a few honourable mentions of skins to get you into the spooky spirit that are available either by direct purchase (crystals), chests or the current Battle Pass. 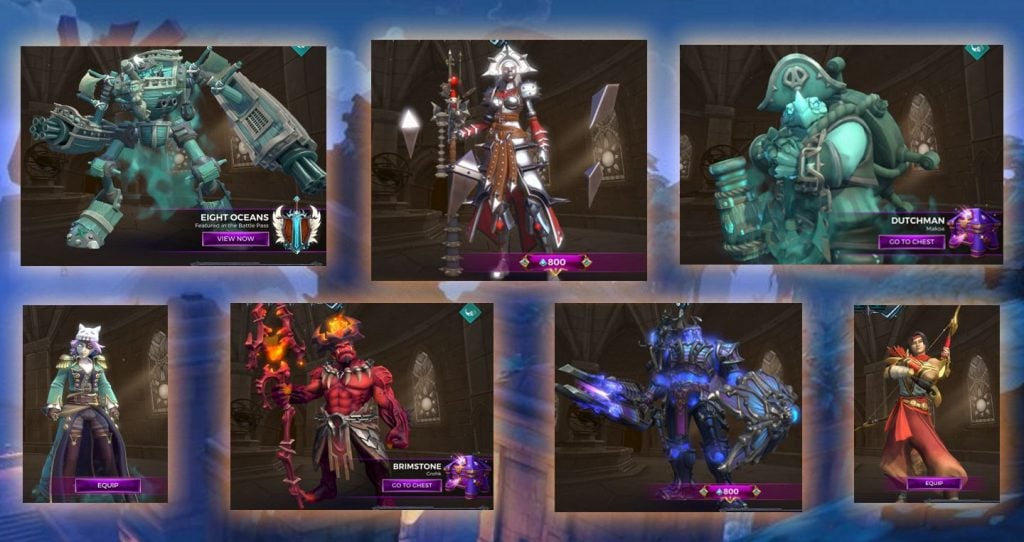