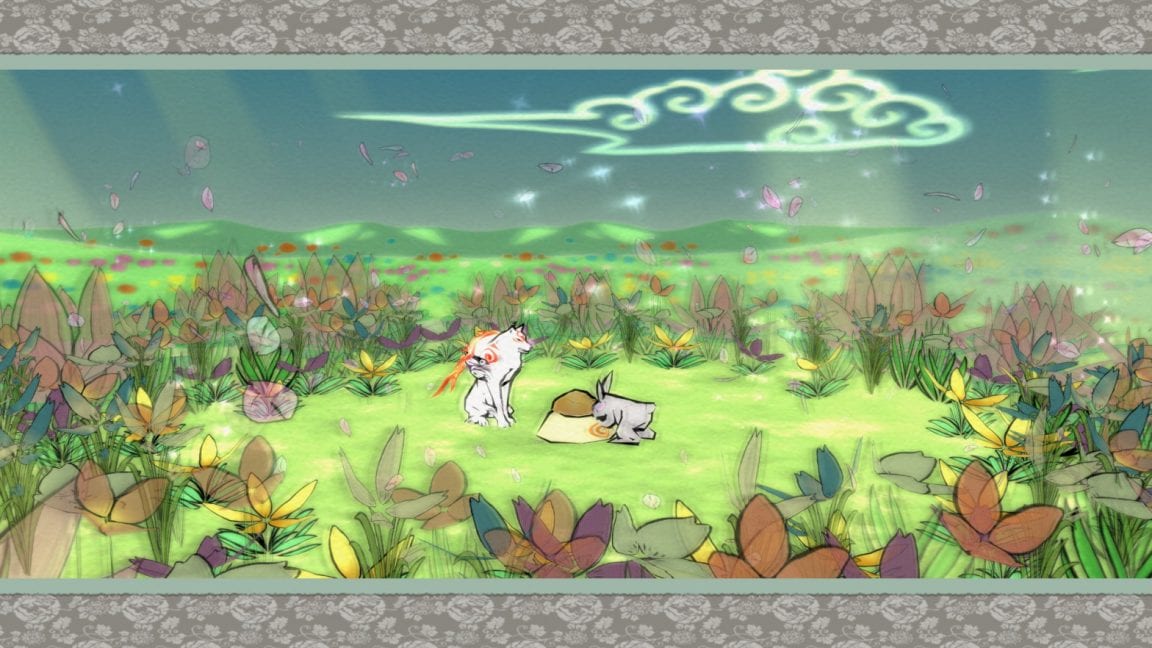 I miss the vibe that the early 2000’s brought to gaming. While it never felt as experimental as the ’90s were on gaming, there’s no denying that developers were allowed to try almost anything, and this led to many interesting mechanics. Games such as Psychonauts and Viewtiful Joe led the charge with creative and satisfying powers, but one release that came right at the end of the PS2’s lifespan and failed to fall into obscurity. A title called Okami, which was released mere months before the PS3, seems to have boiled down what so many people loved about action games that came before it and put it all into one beautiful package. With it recently(ish) gaining a port to every modern console it is no question that this game was beloved among Capcom’s long list of games, and playing it today you can easily see why. The vibrant colors, the Asian-mythology inspired world, interesting and unique powers, the combat and the soundtrack, this game managed to nail almost everything it went for.

Without spoiling too much the plot is your somewhat standard hero story, you’re the reincarnation of an ancient wolf god that died defending the world a long time ago, as a god you’re tasked with reclaiming all the powers you once had and saving the world from darkness once again. Where I find a deviation is in the powers, as you play Amaterasu the sun god, so a lot of your powers have to do with nature. Growing purifying flowers and trees, controlling vines, calling the wind, it is very apparent to see that you’re protagonist is entwined with the world. The method you call upon these powers is unique as well, with you turning the world around you into parchment and using the Celestial Brush on that parchment to cause the change you want. While this method can be clunky at times, it overall feels nice and responsive to draw the changes you want in the world.

The game in essence is very similar to other action games of the time, with a single attack button you mash in combat, a block, a dodge, and your unique power that has a “mana bar” to prevent power abuse. They managed to perfect all of these features, however, as the attacking and dodging feel very precise, and your shield and powers all help to keep the combat from devolving into mashing two buttons. Gaining new powers and weapons also helps to spruce up combat, causing some boss fights to almost feel like an amazing parody of Legend of Zelda bosses. The soundtrack helps to punctuate all of these encounters in the best way possible, matching the tone of the gameplay at every step whether it be a scene of comedy or a heart-pumping action sequence.

The goal of fighting all these bosses is to drive away the darkness they are holding on the land and purify the area they were tainting, and this is where the graphics become the most fantastic part. An unpurified area is very dark and gloomy, usually covered in a purple smog or for some extreme cases, a red and black fog. They look unpleasant and gloomy on purpose as if someone turned the vibrancy down to zero, but this makes you feel all the more accomplished once you have saved an area of the world. What is left pops off your screen like a dream, with vibrant greens and pinks saturating the area just over gloriously blue rivers, the whole world and vibe feels almost unreal. Each area you clear slowly becomes another gem in this uniquely crafted world.

The only complaints I can raise about the game are the same complaints I find with most ps2 era action games. It’s pretty dang easy, the combat can become repetitive especially when you don’t have very many powers, and an issue unique to this game I mentioned earlier, the Celestial Brush mechanic can be a bit clunky sometimes. None of these spoil the game, and repetitive combat is fixed pretty well as the game goes on, but these flaws still are apparent enough to warrant talking about. The Celestial Brush is at its worst when you’re platforming typically, as while you’re running around there’s nothing to constantly use your brush on, but being in a situation where you must stop every few seconds to draw another lily pad or vine can be tiresome.

Overall, I think Okami is a great example of what action gaming was in the first decade of this millennium and took many decent strides to perfect the formula that was laid down by its predecessors. While not every system turned out spotless, that does little to dampen the vibe of this gorgeous title and it definitely deserves your time if you ever find yourself on the lookout for a unique third-person action-adventure.