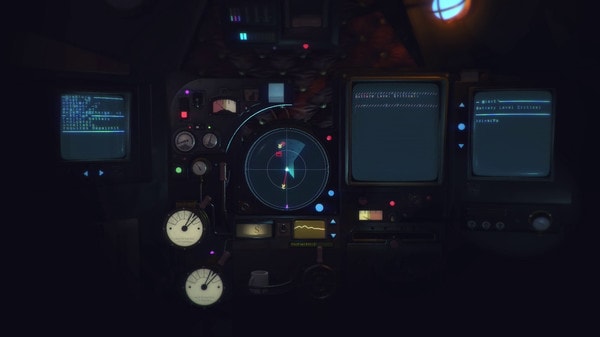 Imagine having to fly a plane, a real plane, without any aviation knowledge whatsoever. What do you do first? Do you turn on the lights? Start the engine? Where is the engine?  Where are the keys? Are there even keys? As you can imagine, you probably wouldn’t be able to even get the plane running let alone take off. This is the foundation that Nauticrawl 20,000 Atmospheres is built upon.

To attempt escaping from an alien planet, you find refuge in an unusual vehicle called The Nauticrawl. As your only means of survival, mastering this strange vessel is the only thing standing between you and freedom. Unfortunately, you know absolutely nothing about operating the Nauticrawl and death is all but guaranteed. But that won’t stop you from trying.  And trying.  And trying.

Nauticrawl is not a game for the easily frustrated. Your mission of escape may be simple but succeeding is all but that. It’s a brutal Rogue-Like with permadeath and you are told absolutely nothing. The player is expected to figure out every aspect of the game through rigorous trial and error. No tutorial, no manual, nothing. Just you and your will to survive.

The entirety of the game is operating the Nauticrawl and using it to navigate yourself to liberation. You have no view of the outside aside from a primitive radar/sonar device informing you of what’s happening outside the ship. Controlling the Nauticrawl is done through a first-person view of the cockpit. All the various switches, wheels, knobs, and computers take up the screen. You click, pull and spin everything and anything until something happens, and eventually you will get an idea of how to manage yourself. Every single doohickey has a purpose and you must quickly become familiar with every function if you plan on getting anywhere.

It’s an interesting gameplay hook. Imagine a Five Nights at Freddy’s but instead of a security station, you’re in a strange vehicle. The mechanics never really adapt, and you will essentially work with the same tools throughout. Repetition is definitely a factor and constantly starting new runs gets old.

With every new run, I found my patience growing thinner. I was no longer excited when I discovered something new. I was just gunning for the next milestone. By the 30th time restarting, navigation became easy enough, but the monotony started to settle in and I made careless mistakes setting me back to the start yet again.

Visually, you will be staring at the same screen through the whole game with only slight variations. With such a minimalist approach to its presentation, it’s impressive what Nauticrawl can accomplish. The glow of the onboard computer illuminates the interior.  Colored lights from the various gizmos flood the screen and convey a great sense of place. The sound design is equally exceptional. The lumbering echo of the Nauticrawl moving is haunting in its own right. Much of your success depends on how well you can recognize the audio cues around you. Eventually, you will identify when your vessel is overheating or running low on battery without ever gazing upon these areas. 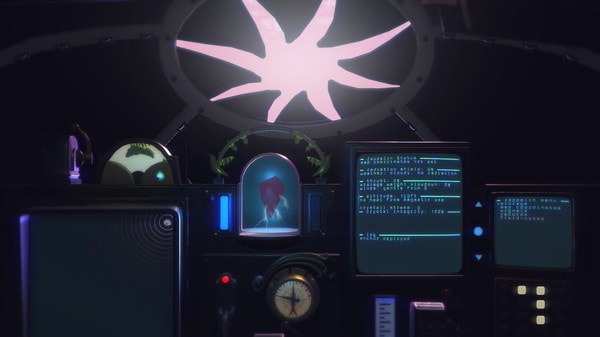 There is a tremendous sense of immersion while playing and it’s easy to get swept up in the fantasy of piloting an alien vehicle. It has this odd sense of familiarity to it but never enough for you to get too comfortable. It’s in that feeling where the game shines brightest, sucking you into the fantasy of its universe. Unfortunately, that magic doesn’t last very long. After about an hour or two, I found the game to be exhausting as the novelty wears thin. Trying to keep up with everything that could go wrong in a moment’s notice got old quick and permadeath continually ensures that one wrong move is fatal.

As you travel, you’ll find downed vessels from previous would-be-escapees with supplies and little memos. They write some clues or pieces of lore to further flesh out the world of Nauticrawl. It’s a fun and interesting way to build a narrative, but the nature of the game goes against this. Since every time you die you restart, by the midpoint, I didn’t care to discover more. I didn’t want to go out of my way unless I had absolutely no choice as to not risk the chance of getting killed.

Before long, you must learn how to preserve your utilities so you can outsmart and outmaneuver your enemies. Often, enemies will pop up and it’s up to you how to approach them. These entities are nothing more than symbols on your radar but they are deadly and require much attention. Once they attack, the sense of danger is overwhelming.  Clambering for the correct switches and rerouting power became annoying. I never got a good sense of how close or how far I could be to them. Sometimes I could sneak past them undirected using my cloak and sometimes I’d get my ass handed to me.

It’s hard to recommend a game like Nauticrawl to everyone. It’s tough – really, really tough, but for someone looking for an interesting challenge, Nauticrawl might be the right fit.  The ends don’t always justify the means, but there is no denying the remarkable sense of atmosphere Nauticrawl provides. There are moments of sheer magic when all the elements click, but more often than not, I found myself getting frustrated.

Nauticrawl will not be for everyone, but if you’re the sort of player who enjoys video games like these, $13.49 is a reasonable price for what will be hours of enjoyment (and frustration).  For everyone else, this is one to avoid.