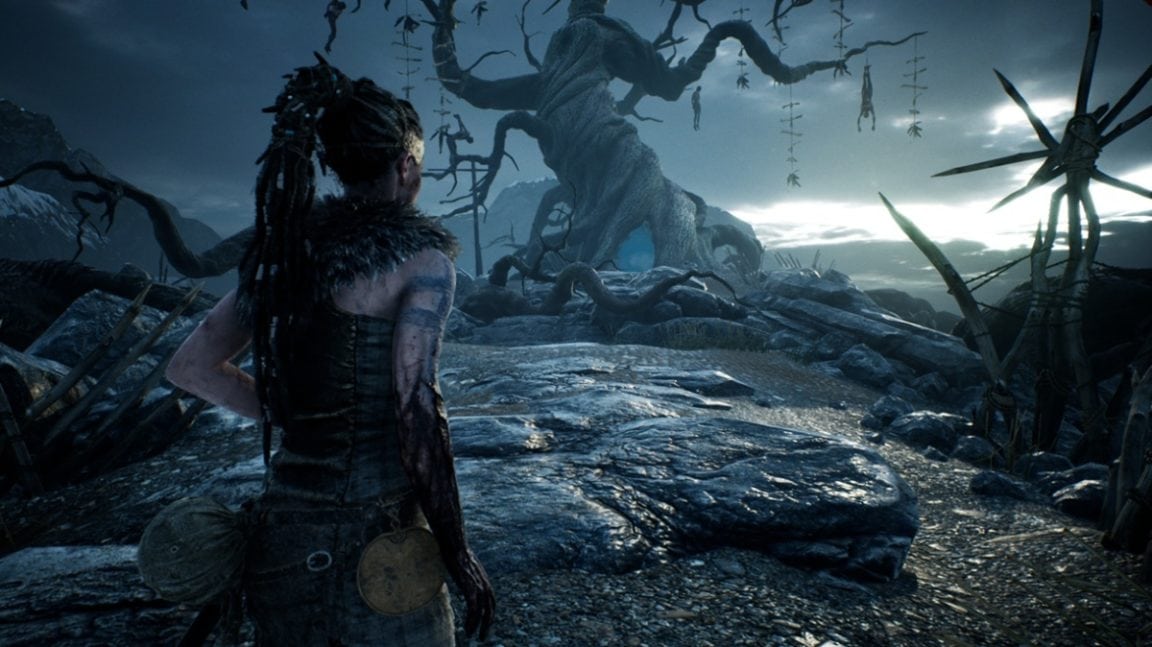 As the credits rolled on Hellblade: Senua’s Sacrifice, I found myself frozen, gripping my controller.  Then, a feeling of relief washed over me. I have never felt so happy to finish a game before, and not because it was bad or poorly designed, but because Hellblade Senua’s Sacrifice is the most captivating, horrific and emotionally draining game I have ever played.

I could have written a normal review for Hellblade but that would be an injustice because this is not like any other game I have ever played. Instead of focusing on the traditional aspects of the game, such as gameplay and graphics, I want to focus on the journey I went through with this game.  My journey with Senua.

In Hellblade, players take control of Senua, a Nordic warrior on a journey to save her dead boyfriend’s soul from the pits of hell.  But this is more than a fight with demons; Senua suffers from severe psychosis and her battle with her overwhelming and terrible confliction is the true battle to be fought.

Ninja Theory should be commended for their excellent portrayal of a protagonist with such a deep mental illness.  Senua is burdened by constant voices and hallucinations and players who embark on her journey will experience her challenges.  As I loaded up Hellblade, it quickly became apparent that I wasn’t just playing a normal video game; I was Senua.  I was on her journey.  The voices within her head rang through my ears.  Every step we took towards the hulking wooden monument in the distance filled my heart with dread.  My breathing was getting heavier and heavier and I was afraid.  Genuinely afraid.

Fear was a constant, a sense of foreboding snapping relentlessly at my heels.  Instead of feeling more comfortable with every milestone accomplished, I ended up feeling more and more consternation as it became clear that things would only get worse.

Hellblade: Senua’s Sacrifice is not a survival horror game, but it is still one of the most psychologically taxing and scary games you will ever experience.  Things will quickly shift in and out of reality and distant moaning and chanting can quickly become overwhelming. The voices in Senua’s head will grow irritated or scared at a moments notice, all culminating in a very heavy and tense experience that felt directed at me personally. The voices were yelling at me and telling me that I’m weak or that I’m not going to make it. Every time Senua fell to the ground, I felt as if I had to muster up the courage to get back up and continue.

What is most unnerving is how unsettling the environments are. Often times things will sneak on and off screen, making you constantly second guess yourself.  Burned corpses litter the ground and darkness will get so thick you can taste it. I found myself quickly growing very uneasy and felt shivers down my spine. My stomach would clench and the slight feeling of nausea would become more and more pronounced as I would walk towards my objective.

At least that’s how I felt, a person who does not suffer from any mental disability, a person who does not know anyone with a major mental disability. The power of Hellblade: Senua’s Sacrifice is not in its beautiful detailed and horrific visuals, clever puzzles, or its simple yet excellent combat.  Instead, its strength is opening a window into a world of a fractured soul. For 6 or so hours, I was transported into a hellscape of a tortured mind, a mind of a woman who has been told she is no good, that she is broken, a woman whose ailment was deemed a curse. For the most part, those around her shun her because of her mental state instead of try and help her causing her to spiral even further down the rabbit hole.

Moments of unstable mental incidents relay into memorable gaming set pieces that will have your palms sweating as you grip the controller.  More than that, it gives the opportunity to experience just a small piece of the reality which some people are forced to live.  Imagine that one second you are somewhere safe and pleasant and the next you are not.  Just imagine, really imagine, that being a reality you must live with. To a microscopic degree and for a fraction of a second, I was able to imagine what it must be like to live like this and I couldn’t help but feel an overwhelming amount of gratitude for the blessings of my life.

Hellblade is, of course, a video game.  It is fictional and exaggerated to some degree, but the reaction I had to its many moments of dread were very real, as were the moments of beauty. The definition of psychosis is a “severe mental disorder in which thought and emotions are so impaired that contact is lost with external reality”.  Nowhere does this say that all of these delusions have to be terrifying and Ninja Theory were sure to add moments of true beauty. These moments were few and far between, but due to the dark nature of the game they were extremely powerful.  For those few moments Senua was at peace, and so too was I. It felt like a brief solace in a chaotic world that only strengthened my bond with Senua and added even more motivation for me to continue the journey alongside her.

As Senua’s story concluded so did my time with her. The final scene played out and I found myself overcome with great sadness and joy that our journey has come to an end. Saddened that my time with her was over and that I could no longer walk with her, but happy with the conclusion. Now I am back once again, in my living room, just a man in front of a TV, controller clenched firmly in my hand and tears rolling down my face. And even though Senua is not a real person, to me she was as real as anything.  Her motivations, her struggles, her happiness and sadness, all were and are real to me.

Senua is someone that I look at and gain strength and inspiration from and although our story together has come to an end, what I felt and learned along the way will never be forgotten.