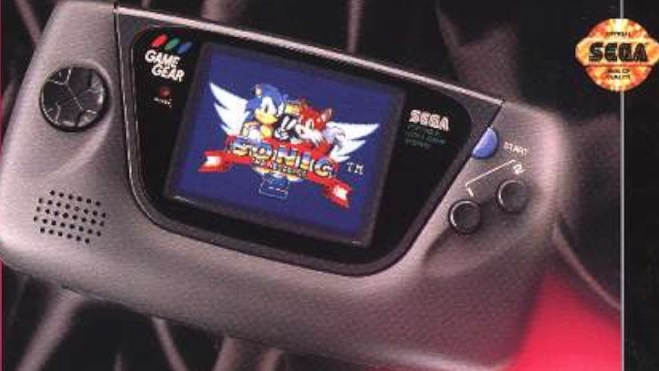 BY DEREK LABAT: Nowadays, gaming on the go is as easy as downloading an app onto a smartphone, but there was a time, not too long ago, when if you wanted to duplicate the video game experience away from home, you had to go to an arcade or settle for one of those Tiger LCD games (yeah, have fun with that).

Things changed forever in 1989 when Nintendo released the Game Boy with Tetris as its pack-in game and, since then, they have dominated the market (or longer if you go back to 1980 to include their Game-‘N-Watch games).  That’s almost three decades. Of course, they’ve had their fair share of competition, the biggest coming from their bitter rival at the time, Sega, in the form of the Game Gear.

On paper, the Game Gear seemed to be the obvious handheld console choice for a gamer; it was essentially a compact version of Sega’s 8-bit Master System with a full-color back-lit screen. By contrast, the original Game Boy wasn’t nearly as powerful as the NES, couldn’t do colors, and didn’t have a back-lit screen.  It should have bee a no-contest.

I got a Game Boy for Christmas in 1990, but I ended up only having three games; Tetris (which I lost during a family road trip to Texas), Super Mario Land, and Dr. Mario. Eventually, I lost my Game Boy when we moved in 1992. That same year, I got a Game Gear for Christmas — though I didn’t ask for one. My parents bought me two games for my new handheld console; The Simpsons: Bart Vs. The Space Mutants and Taz-Mania.  Neither anything to write home about but did look superb on the little screen compared to the Nintendo titles I had been playing earlier that year.

One of the reasons that the Game Gear struggled, and its biggest Achilles Heel, was its battery life. The Game Gear took six AA batteries to power that mini-Master System with its full-color back-lit screen. By contrast, the Game Boy only need 4 AA batteries. I put in a fresh set of batteries in the morning, and after playing for a few hours, the power light started to flash, meaning the batteries were ALMOST DEAD! If you didn’t have an AC adapter, you’d have a very expensive brick on your hands, though having to be wired to a wall kind of defeated the purpose of having a portable console.

All this was going on during the great 16-bit wars. I was Team SNES and though most of my attention when to that console, I did end up buying a few more games for my Game Gear: Sonic the Hedgehog 2, Sonic Chaos, Batman Returns, X-Men, and World Series Baseball ’93 — all considerably better than the games that were bundled with the console. Although the Game Boy had clearly established itself as the premier handheld console, I actually knew other people with Game Gears. One of my cousins had one with the first Sonic the Hedgehog (pretty good), and a friend had Mortal Kombat and Incredible Crash Dummies (not bad and meh, respectively).

I sold my Game Gear in 1998 around the same time I sold my Atari 7800 but my household still had its fair share of handheld gaming consoles; my sister had a Game Boy Color with Pokemon Yellow and Nicktoons Racing, and in 2003 I bought myself a Game Boy Advance SP and three games.  Despite having access to so many other options, I always remember my Game Gear very fondly.

As for Sega, by the end of the ’90’s, it was plagued with company in-fighting and had inundated the market with the Sega CD, 32X, and the Saturn (all flops), leaving the Game Gear lost in the shuffle. The Dreamcast was Sega’s last stand in the console wars, but it went out with a whimper in 2001, and Sega is no longer the major player it once was in video games.

In the last two decades since I sold mine, I’ve discovered the Game Gear actually had a strong library. Unfortunately, Sega never released a peripheral to play Game Gear games on another console a la Super Game Boy, though they did release one which allowed gamers to play Master System games on the Genesis).  I’ve always been tempted to pick a Game Gear up for old times sake, but according to a number of YouTubers who specialize in restoring computers and consoles, Game Gears don’t age very well, particularly the screens, and repairing them can be quite the chore.

Hopefully, with companies releasing mini versions on old consoles, maybe a Game Gear mini could be around the corner.  Let’s just hope it’s actually more portable than the original.