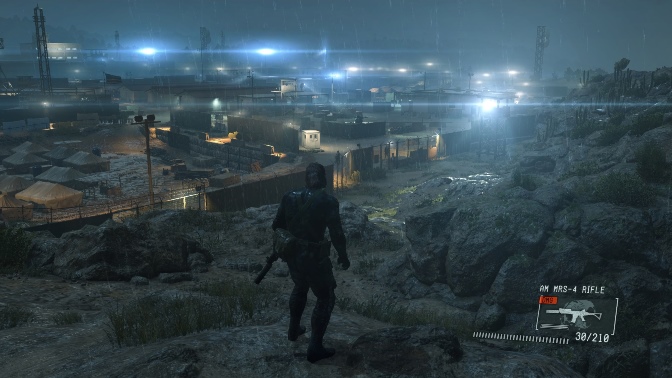 It has been about 4 years since the release of Metal Gear Solid V: The Phantom Pain, Kojima’s swansong for the beloved franchise. The game was met with stellar review by almost every major outlet but now, completely removed from the game, I finally feel comfortable saying that Metal Gear Solid 5 disappointed the hell out of me.

Metal Gear Solid is one of my absolute favourite video game franchises.  The crazy story, unique and interesting gameplay, memorable characters and bonkers villains elevate the IP into legendary status, but with the fifth entry, I felt almost none of the emotions that have made me hold the franchise in such high esteem.

Gone were the memorable characters, gone was the interesting and crazy narrative and gone were the hysterically awesome and creative bosses. Instead, we got about 100 missions that were essentially recycled clones of one another. I can’t count how many times Miller sent me to go get some random researcher or rescue a POW that seemed integral to the mission only to completely forget about them as soon as I return to the chopper. It all felt menial and unimportant almost fetch quest-y.

Go get that guy, destroy that thing… no, thank you.

I was most baffled at how they almost completely tore out Boss’s vocal cords. After the big announcement that Keifer Sutherland would be helming the mantel of Big Boss (a move I understood despite being sad that David Hayter won’t be back), you would think they actually utilize his talent. I understand this could be due to the fact that you never actually play as Big Boss to begin with, but even still why isn’t he reacting to anything? Many times, developers talk about how they keep the protagonist silent to utilize a sense of emersion, but I have never felt less immersed in a game than when something momentous happens to my character and all he does is stare into nothingness. Do I need to remind everyone of the laughably awkward Jeep scene with Skull Face?

And let’s take a minute to talk about Skull Face. What was that guy’s deal? Throughout my entire playthrough there was almost nothing interesting or exciting that this guy did. The villains in previous Metal Gear titles always felt personal and somewhat justified in their ideology and motives but with Skull Face I never felt any of that.  They didn’t make me care. You don’t even fight him in an appropriately epic showdown.

Perhaps the most frustrating thing about The Phantom Pain was that the mechanics and moment to moment stealth gameplay were both perfect. Controlling Boss was so fluid and sneaking past enemy soldiers felt natural instantly, you truly felt like a super secret soldier spy. It was gratifying.  The gunplay was also exceptional and for the first time in a Metal Gear game I was seeking out firefights. But still as perfect as the game felt, there was no real point in what I was doing other than being told it was the next mission.

I can go back out in the field, rescue a POW, take out high-value targets, upgrade my gear but for what? Just to go and do it all over again? The mission structure got so stale so quickly. Why would I care what new gun or tech I could use if I’m just completing the same exact mission over and over again? The sense of freedom in games is important but I feel that sometimes too much freedom can become a big problem. Some might play the game and experience these amazing unscripted moments but for me, that was never the case; almost every mission would begin and end the same way, with little to no actual surprises. Just take a long helicopter ride, run for 5 minutes to the base/camp/outpost, kill a guy, run back the landing zone and fly back to base.

I understand that this loop is the whole point of the game – for the first time, the series decided to focus upon gameplay above all else – but for me, I just felt like I needed more. I just felt disappointed that I had absolutely no connection to it; I didn’t get any amazing crescendos or jaw-dropping moments.  Instead, I got countless rides in a helicopter while Miller rambled in my ear about some nonsense.

Maybe many of the gripes I have with the game could be all thanks to the whole Kojima vs. Konami debacle but I will probably never know what really went down, so I can only really judge the game as it is and as it will remain.

I don’t think Metal Gear Solid V: The Phantom Pain is a bad game.  Ultimately, I believe that it’s a great game that just wasn’t for me but really, when I think back, what I remember the most about it is how it tricked the world into believing that it was a better game than Mad Max.