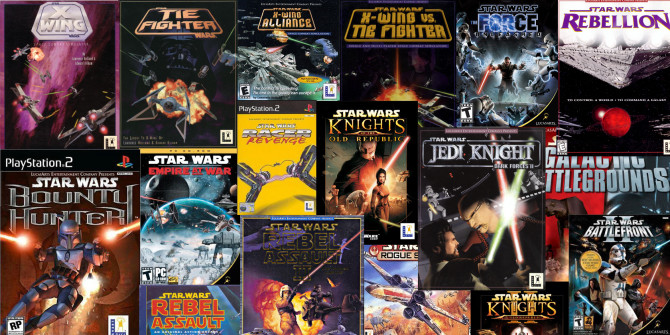 “Before the dark times, before the empire”, LucasArts was the development and publishing arm of LucasFilm. They were responsible for the interactive side of the Star Wars franchise – and by interactive I mean, of course, video games. LucasArts made many excellent games over the years in addition to some downright bantha fodder.

Doing a little digging online, it becomes obvious that working for LucasArts was not always a rosy and seamless relationship. The need for the lore aspect of their games to be just right was something of a sticking point and seemed to hold up and even cause major development problems for some games.  That said, they were able to get many games published on a whole array of systems over the years.

LucasArts are installed in the pantheon of gaming greats, in my opinion, due to the amount of content they published and created. While they may have made and published some abject carbonite, they have also made some of the finest games to ever grace a game system.

Here is a quick synopsis of LucasArts games over a short time period, if nothing else than to reinforce that we need more Star Wars games and we need them now!

Of course, LucasArts produced other games but Star Wars was their main go-to franchise.  As I am focusing on Star Wars, I will stick to those games with a few honourable mentions near the end.

Within 5 years, LucasArts licenced, developed and published more than the 9 games mentioned.

Some honourable mentions that were released in the years after 1998 include Knights of the Old Republic 1 and 2, Star Wars Bounty Hunter, Rogue Squadron 2 and 3, Republic Commando, Battlefront 1 and 2, Empire at War and finally The Force Unleashed.

As you can see from the list, the release of some fairly solid games with good sales was a staple of LucasArts. The steady stream of game releases continued over the years until the sale of LucasFilm.  They developed and/or published some stellar games – games for every type of gaming fan, all within the Star Wars sci-fi universe. The scope was huge and LucasArts reached for the proverbial stars on many occasions. Sure, they misfired at times, but it was the endeavour and the sheer number of published titles that sets them apart.

Star Wars is currently going through somewhat of a transition. Disney now has its grubby paws on the franchise and everything that goes along with it. As Disney was unequipped to design, develop and publish games, they sold the rights in a 10-year deal to our favourite publisher: EA. In turn, EA involved DICE, the company behind the popular Battlefield games, to start work on a Star Wars experience.

EA being EA, with profit margins being the ONLY thing they pay attention to, set DICE on their way to creating the first completely NEW Star Wars game in a number of years. Of course, coupled with the task was a strained development time and the introduction of the dreaded microtransactions. Star Wars Battlefront released to fairly muted applause, the main gripe being that the game was empty and seemed unfinished. Beautifully crafted it was a visual treat but lacked what made LucasArts games of the past so engaging: a meaningful narrative.  The lack of a story mode and focus purely on multiplayer seemed to be a mistake, as sales were not in line with projections.

EA followed up with Battlefront 2 and many thought that EA would have spent some time in a Bacta Tank and learned from their mistakes. Alas, that was something of the truth but not entirely. They introduced a story mode with a strong female protagonist and the mode released to a fairly positive fanfare although many outlets complained of it being predictable and unoriginal. It was nonetheless there and filled a hole that Star Wars aficionados and gamers wanted. The multiplayer, on the other hand, was another mess altogether.

Disney selling the rights for the creation of Star Wars games to EA has been, in my opinion, a mistake. We have had two mediocre games in 5 years. LucasArts licenced Star Wars to many companies which meant they chucked out games almost as fast as racing through beggars canyon. They had a steady release cycle, releasing sometimes 2 or 3 times per year. I understand that development cycles are longer in today’s gaming world but to have only 2 games within 5 years is a poor return and is something that surprises me considering EA put profit margins and sales front and centre. Surely EA would have multiple studios involved in making as many games as possible. Even movie tie in games seems to have disappeared. This could have been an area of success at least in terms of sales; the Force Awakens and The Last Jedi have released in recent years and were prime for game creation.

I am aware that EA has other developers working on Star Wars games but, if you have been checking your gaming news regularly, you will know that they have been experiencing delays and all manner of staff changes.

I am hopeful that EA will eventually release a good Star Wars game; the licence and fans deserve it. I only hope they don’t ruin it with their usual blinded view on microtransactions. This franchise deserves more and so do the fans.

Remember… The Force will be with you… Always.