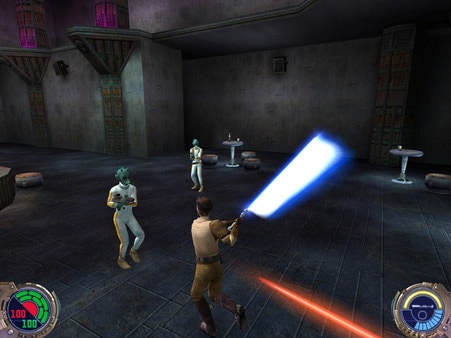 BY MATT BOWEN: Let me preface this by saying that I don’t consider Jedi Outcast (aka Jedi Knight 2…aka Dark Forces 3…) to be a fantastic game. The level design in particular can be very awkward and honestly, quite boring. The shooting doesn’t hold a candle to contemporary FPS titles, and the cutscene animation is dated to the point of unintentional comedy.

So what makes it legendary? Oh come on, do I even have to spell it out?  That incredible lightsaber combat.

Not just the saber-swinging, but the various force abilities that gradually increase in strength over time all contribute to what can be summed up as, arguably, the closest a video game has come to emulating the abilities of a Jedi so far, and it holds up rather well.

I won’t get too much into the story – it’s very video-gamey and won’t hold up to the movies but it’s still a delight, thanks to the familiar symphonies of John Williams and those iconic sound effects, together with a very strong voice cast (Jeff Bennett as Kyle Katarn? You mean I’ve been listening to Johnny Bravo say “Kowakian Monkey-Lizard”?). It’s a fun journey and it makes me feel a little bit guilty that I skipped straight to Outcast. Sure, it’s perfectly understandable without context, but there are a lot of allusions to the prior entries that bounced right off of me.

But just how could I resist that lightsaber combat? Picture; a Jedi running into a small-ish room with three stormtroopers. He immediately force pushes the one next to him into the wall while cutting down the one to the other side of him. Another stormtrooper approaches from further ahead – the Jedi throws his lightsaber like a boomerang, cutting the stormtrooper clean in half – then, as the lightsaber flies back, slices off the hand of the stormtrooper who was force-pushed earlier as he’s getting up. That’s how a typical encounter can go in Jedi Outcast.

Of course, to a non-Star Wars fan, that last paragraph was a bunch of ridiculous rambling, and that’s a perfectly valid perspective. If you’re not into Star Wars, this isn’t the game that’ll change your mind, especially seeing as you have to sit through a few hours of clunky shooting before you get your lightsaber and force abilities. 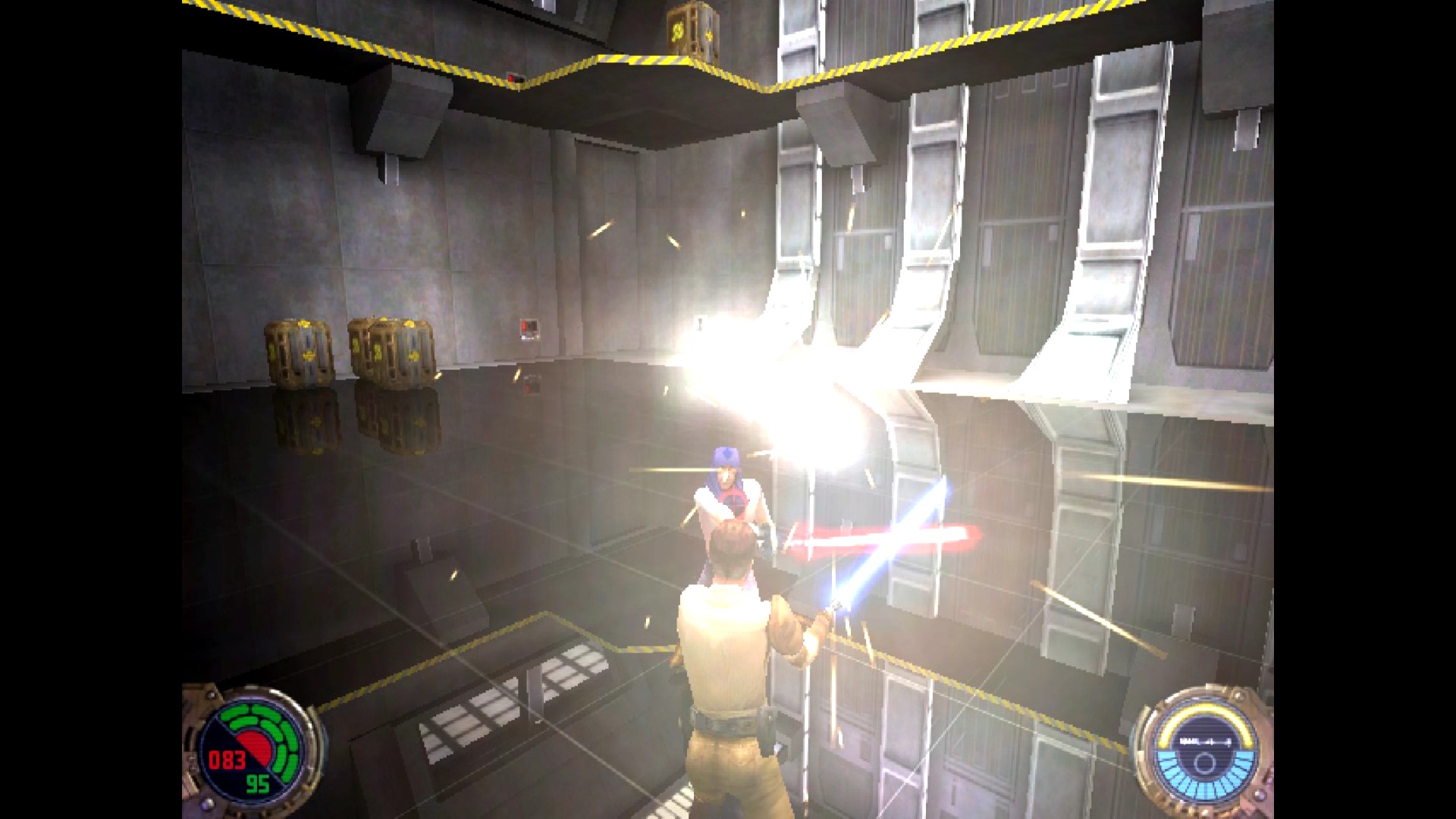 Force abilities are pretty varied, unsurprisingly. From being able to jump a mile in the air, to super speed, and the classic force-choke, there’s a lot of fun to be had. For me though, nothing beats a simple force push and a 60ft drop. There are a fair few sections of the levels that require you to make direct use of force powers, so they’re not just there as window dressing. 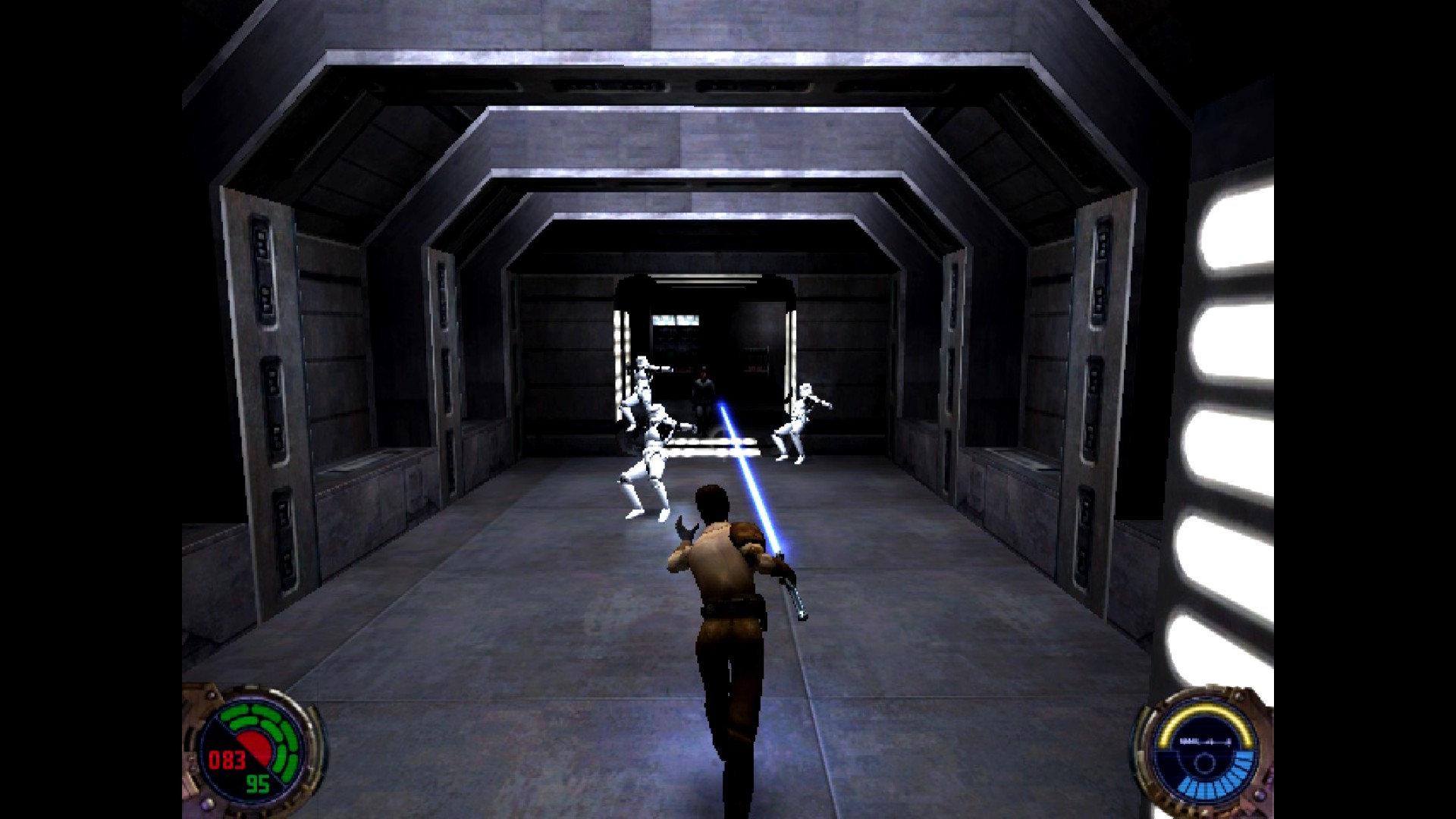 And if you ever get tired of bashing away at the AI-controlled Sith (who are very sportsmanlike, they’ll happily stare you down until you get too close to them and initiate a duel), the multiplayer is, to my knowledge, still up and running. 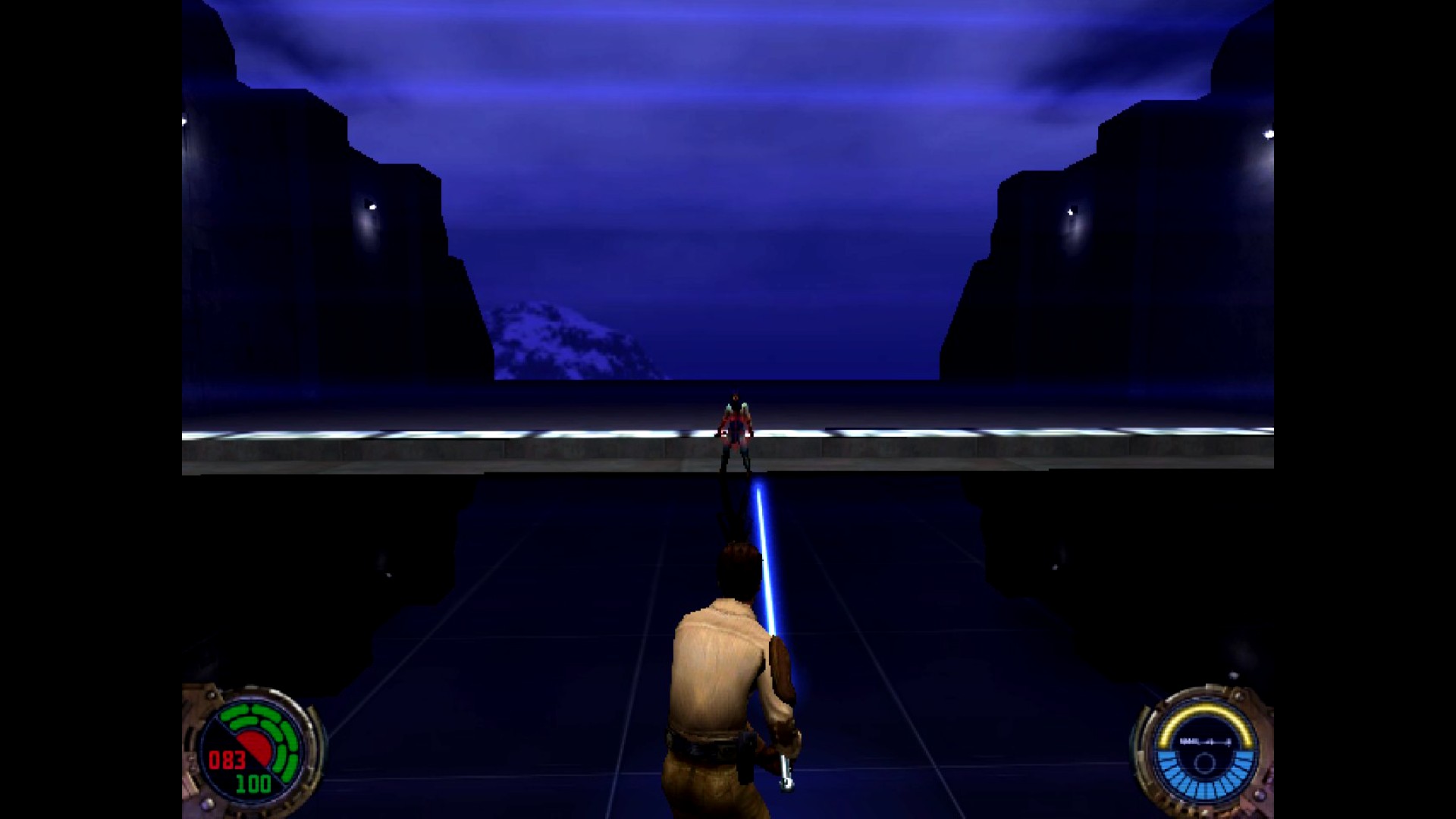 Honestly, after all this gushing about the lightsaber stuff and force powers, I can’t help but feel a bit sorry for the poor sods who designed all those different blasters in the game that I almost never touched.

Even after Jedi Fallen Order came out and surprised everyone by being a good game published by EA, it doesn’t really quite capture that Star Wars magic that the older, early 2000s games did. Jedi Outcast is like a time capsule of that magic, and once I get around to Jedi Academy (aka Jedi Outcast 2…aka Jedi Knight 3….aka Dark Forces 4…) I’m hopeful I can put it right next to Outcast in that regard.

Oh, and always remember to slap in the console:

Wouldn’t be Star Wars if everyone wasn’t losing their hands, after all…