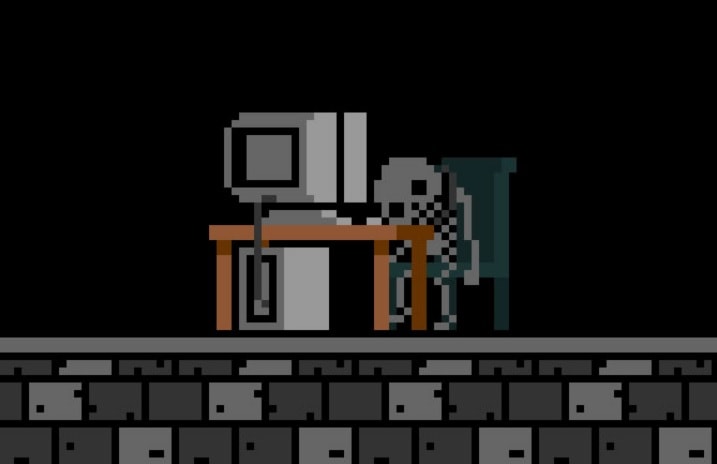 BY DEREK LABAT: I love playing video games – if I didn’t, I wouldn’t be writing for this site – but as much I enjoy playing them (mainly retro games), the idea of making one has always fascinated me. Imagining my creation in millions of homes, gamers gather around their TV’s, spending hours on end trying to solve the puzzles and defeat the enemies I so cleverly put inside a cartridge (and making a nice bit of cash, too!) gave me a buzz.

Aside from drawing screenshots to pass the time, the first real talk about actually designing a game came about when I was ten. One of my classmates, Roy, told me he was pretty sure he could develop some sort of game to work on an NES. I didn’t know if he even had a computer, much less if he knew how to code; all I knew was if any of my friends could do it, it was Roy.

Of course, we got no further than idle talk, though if we knew then that the entire British video game industry in the 80’s was built in the bedrooms of kids not much older than us, maybe we could have been the next Tengen! (Hell, we couldn’t have done much worse than LJN or Color Dreams.)

Fast forward to 2016 and I didn’t have Roy (in fact, I haven’t seen him in 25 years), but I had my own computer, the internet, and the willingness to learn. The question now was what type of game to make.

I first thought about a homebrew. The problem with that was I couldn’t figure what genre to go with. RPG’s seemed popular, but making a unique one, even one that was bare bones, just seemed too labor-intensive.  I didn’t have a tablet to make sprites, I know nothing about writing music, and how do I make sound effects?  No, an RPG was a no-go.

A platformer seemed the simpler proposition, but how do I keep it from coming across like a bad Mario or Sonic rip-off, along with many of the issues highlighted when looking at RPGs?

Then somehow, something must have caught my eye while flipping through all those Youtube videos; text-based adventures!  I didn’t have to worry about graphics or sound, and it wasn’t as labor-intensive.

Admittedly text-only adventures are before my time. The closest thing I’d ever seen to it was King’s Quest on my cousin’s computer, but even then, I remember controlling the character was predicated on typing specific commands. That was still too much for me to figure out at that point, but after reviewing all programs people used to make text-based games, the one that I saw that I felt most comfortable with was Twine.

Twine requires no coding experience, the icons were easy to understand, the major functions were basically point-and-click, and the demos I saw played out like a choose-your-own-adventure book. As for the plot, I didn’t want to go for the old wandering-around-in-a-strange-castle-and-pick-up-stuff bit. I wanted something different. I had an idea for video game fan fiction, basically Who Framed Roger Rabbit? – the movie, not the game – if it was a Nintendo Power comic, but rather than wasting energy on something I could never really do anything with, I decided to make it into something completely original, hence The Scent of Death! (Would you believe the title was the hardest part of the project?)

The object is a simple one: you guide two private investigators as they venture into the city’s gritty underworld trying to save a kidnapped girl without getting killed or arrested. Make the right choice and you advance; make the wrong choice and you end up six feet under or behind bars. I wrote the story as I went without using a storyboard but ultimately I was happy with my finished project.

Now, how to get people to play it? A challenge for any video game developer.  Once again, I searched the internet and found the Interactive Fiction Database.

The Interactive Fiction Database is filled with text-based games like mine, with many authors having quite a following. I uploaded my game last year, posted a link on Facebook, and, to date, two people have tried the game, neither are Facebook friends and it has a rating of 1.5 out of 5. Ouch.

Despite that, I won’t let that stop me from making another game. I enjoyed creating The Scent of Death and would like to make another title, possibly in another program.

If you’d like to try The Scent of Death for yourself, you can play it on IFD.

I’m definitely no Shigeru Miyamoto, but like the guys who made Action 52, at least I got my game to run!