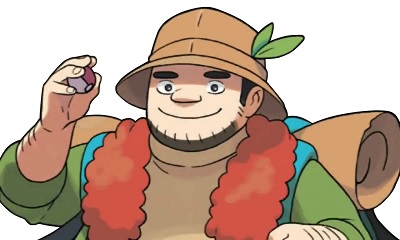 We all knew this dude had some hidden depths.

Pokémon is a super popular phenomenon, as it has been since its inception in the old “sneak in a few battles in the 10 minutes it takes your modem to connect” days. There’s like a 2% chance its popularity is due to specialized pheromones released by the game cartridges (I have similar theories about the fandom of Mumford and Sons), but more likely it’s because they’re designed well and boast a super engaging world in which to release your inner animal-battling psychopath. Or child, I guess.

So here’s my pitch.

You start a new game, and you’re greeted with a choice of origin points a la Dragon Age: Origins (albeit less “stabby stabby”). Wanna be a shop owner? Do it. Pokémon League champion content to simply defend their title? Sure. Late bloomer who, at the age of 28, still has no idea where they’re going in life? Yeah bud.

The point is, this choice only determines where you begin in the world. Kinda like that Skyrim mod that randomizes your starting position, or being born to rich parents. There’s no “become the best Pokémon trainer” storyline here, cause it’s already been done. You’re an adult. You’ve got your own life now, it’s just that there are Pokémon in it.

There would be a combat system, naturally, but you could also play the entire game without using it. Sounds boring, right? Yeah, probably. But so is sports, and people still like that for some reason. Besides, almost every game mechanic would utilize Pokémon in some way. Platforming? Your Drifloon can make you all floaty. Stealth sections? Gastly can make you invisible. Persuasion during dialogue (cause you’re damn right there are dialogue trees)? Alakazam can psychically boost your charisma.

But to what end? Well, there could be a dramatic but ultimately underwhelming story arc that you could tackle when you run out of side quests and places to explore. Yeah, you know where this is going. It’s a Bethesda production. Or maybe Obsidian. Either one, really. But not BioWare. They’re solid storytellers, but they need to work on their open worlds. Maybe bring in Mac Walters and a few other BioWare writers as consultants. Where was I?

Right, the objective of the game. Well, let’s say you decide to start off as a police officer. You can be your own created character or one of several million identical Jennies. Either way, you’ve got a case to solve. It’s the case of that homeless dude exposing himself by the Poké Mart again. You spot him, give chase, he throws a bag of moldy almonds at you and runs away. Case closed. Plus your Espurr really likes the moldy almonds for some reason, so hey, you save a bit of money on groceries this week. Not too shabby.

Yes, it’s not a glamorous life, but it pays the bills, and you sometimes get to see new and exciting things, like that gem/envelope/weapon/other MacGuffin the homeless guy dropped. Yay, plot. Naturally, the other “origins” will use different, yet no less expertly crafted story beats to introduce the main arc. Maybe the Pokémon League champion will find the magical [insert thingy here] after defeating a particularly feisty trainer. A shop owner will find it in an antique container they bought off a quiet drifter.

The possibilities are endless, but the point is the main story will be painfully cliched and barebones, because this isn’t about destiny and ancient prophecies. This is about your life in the world of Pokémon, and whatever you make of it.

Want to battle? You can battle. Trainers are everywhere. But now you can be on the other side. See that stylishly-dressed 10-year-old jogging towards you? Go ahead and battle the little fart. But maybe throw the battle to raise their confidence. After all, if you keep beating down all the hopefuls coming your way, then nobody will take down that prick of a League champion. Imagine that. Your actions can dynamically affect how strong the trainers are who want to take down the Elite Four. You’re a bystander, but you’re important in your own way.

Or maybe you don’t want to battle. Maybe you’re a palaeontologist. With your trusty Sandshrew by your side, you dig up fossils and sell them for profit. No real urgency, but you can take on side quests for a little extra reward (and a little extra danger, cause you know you want it). Shop owner, parent of a trainer, gym leader, Team Rocket grunt, your life is yours to live as you see fit. Or you can just go without a label. Just do whatever you feel like at any given moment.

Oh, you noticed that, did you? Yes, you can also be a villain. Rise through the ranks of Team Rocket as a lowly grunt to Giovanni’s chosen successor. Also maybe pick some Pokémon other than a dang Ekans or Koffing. Yeah yeah, poison = evil, we get it. You’re very clever, Team Rocket.

And that’s really all there is to it. Obviously, the intricacies would need some sorting out, but I’m an idea man. Leave that to those with talent and a future. I just want Pokémon to evolve (oh shut up) along with its audience. Sure, keep the regular entries. They’re timeless, after all. But as we age, wouldn’t you like to feel about a new Pokémon game the way we 30-somethings feel about Toy Story 3?

Dan is thrilled that you're reading this.