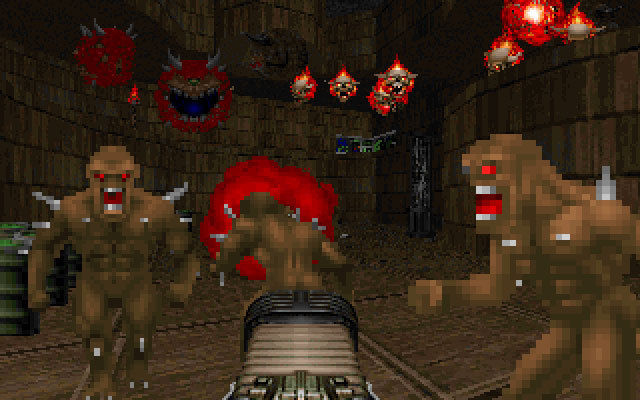 BY DEREK LABAT: Doom was a game-changer.  Very few video games have earned that accolade.  To justify that title, a game would have to make a mark with critics, gamers and the general public at large. Doom did just that. It redefined the FPS genre and became an iconic title in the history of the video game industry.

id Software unleashed Doom on December 10th 1993.  I wasn’t a part of the launch party, as I got my first computer a few years late on Christmas 1995.  It was a Packard-Bell running a 486 hard drive at 88 MHz and Windows 3.11, back when Windows was just another DOS program. I’ve always been a console gamer, so I was one of those kids that actually used his computer primarily for homework! Looking back, the reason I didn’t get more into PC gaming was probably “outta sight, outta mind.” Back then, you didn’t see many, if any, TV commercials for PC games, and you had to go to computer speciality stores to get them.

I did have a few games on my PC, and by a few, I mean five: Megarace (which was packed into the machine), Metaltech: Earthsiege and Wing Commander 3 (my dad thought I’d like them. Meh.), Psycho Pinball (a decent pinball game which I picked up for $11), and Doom (which I DID ask for).

So, you ask, how did you find out about Doom if they didn’t advertise? The answer: shareware. Shareware was a concept where publishers would release the first part of a game, but unlike a demo which would simply stop or restart, you’d get a message telling you how to order the complete game (using snail mail or fax!)

I got my shareware copy of Doom in a book about the history of video games. It came with two CD’s with a collection of demos and shareware, most notably Jazz Jackrabbit, Wolfenstein 3D, Alone in the Dark, Sam & Max Hit the Road, Blackthorne, and, of course, Doom. I liked most of the games on the discs, but the one I kept coming back to was Doom. 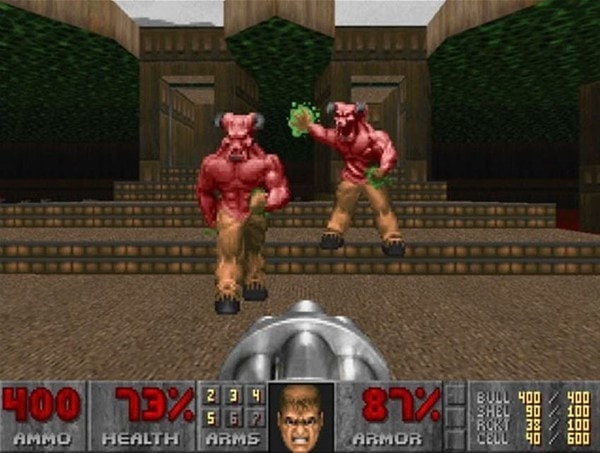 Doom is not a complicated game by any means. You’re trapped on the Martian moon Phobos surrounded by possessed space marines and demons. You have to make your way to the exit of each area by shooting everything that moves. You start with a pistol and your fists, but you can get a chainsaw (if you can find it), a shotgun, a chain gun, a rocket launcher, a plasma rifle, and of course, the BFG-9000!

Simple, no? But what made Doom different was the intense gameplay, graphics and gore. Oh, the blood and gore – it kept me coming back. Somehow I managed to convince my parents to go out and buy me the full version of Doom – but not just any version of Doom: THE ULTIMATE DOOM!

The Ultimate Doom came out in 1995. It had the original three episodes – each with nine levels – plus a fourth episode and a poster (that I hung up in my room, of course). I didn’t have a controller for my PC and I couldn’t get the hang of using only the keyboard to control the game, I used my mouse, pushing and pulling it to move around. It was hell on my wrist but I didn’t care. I loved it!

Doom was a phenomenon in the ’90’s. It was ported to nearly every console at the time, it gave birth to online multiplayer, crashing servers left and right, but most importantly, it became the archetype for the entire first-person shooter genre as we know it today. Yes, Wolfenstein 3D came out first, but although you could move left and right and forward and back, you couldn’t raise or lower your field of view. Doom had you go up and downstairs and elevators and shoot from above and below.

Doom garnered negative criticism from religious organizations, citing the violent action, blood, gore, and satanic imagery in the game could be used as a murder simulation. This rationale was fueled when entries in the journal of Eric Harris, one of the shooters in the Columbine High Massacre in 1999, was an avid fan of the game. I went to high school around that same time and as much as I loved Doom, I would never do anything so horrific. It was just a game – a great game, but a game nonetheless. 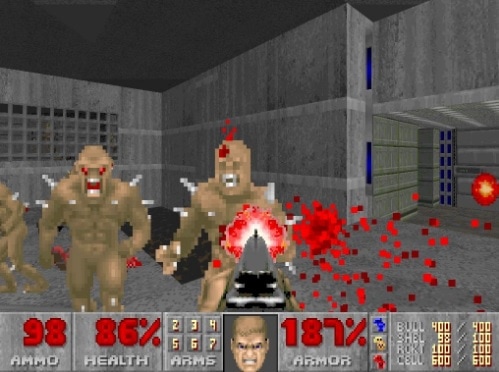 Like many classic games, Doom’s charm is in its pick-up-and-play nature. You can master the controls fairly quickly. The plot is bare bones. Your character doesn’t even have an official name; fans just call him Doomguy. As far as first-person shooters have come – and how complicated they may seem – it’s still amazing how Doom took the world by storm…guns blazing!

Doom is undoubtedly the game that I think of when people mention Christmas, much in the way that Home Alone comes to mind when someone mentions Christmas movies.  Sure, it may not be filled with festive cheer, but it’s a great way to pass a few nights during the Christmas break.