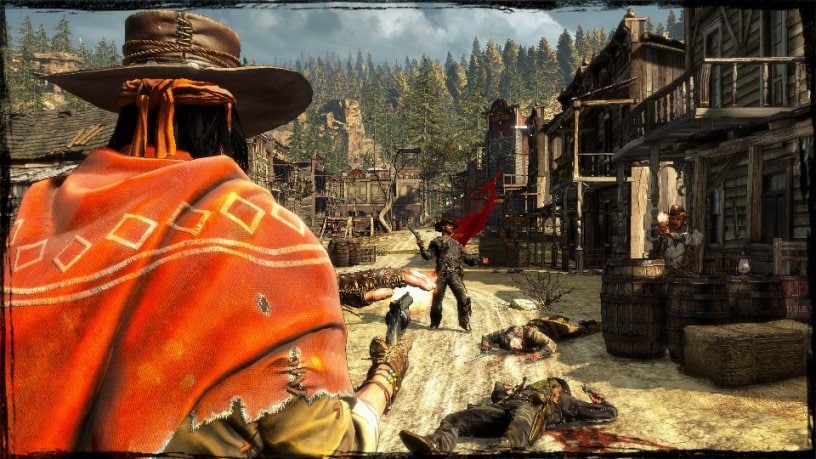 With that in mind, here are 5 Wild West games to play when you’re not playing RDR2:

Hunt: Showdown is currently in Early Access but with Crytek, creators of Crysis) at the helm, you know that this is going to be a beauty.  And, it is.

Crytek describes the setting of their survival-competitive-FPS title as “the sun is setting on the Wild West”.  The twist is, this is more of a horror game than it is a traditional open-world, Wild West sandbox.  It offers a tense experience, where you team up with other players or play alone, to hunt monsters while fending off human players.

Red Dead Redemption 2 fans will undoubtedly be put off by Westerado: Double Barreled’s visuals, but don’t let that stop you from experiencing this sprawling, open-world Western title.

It has a story of revenge as you try to track down the man who murdered your family, piecing together details through conversations and interrogation.  There is plenty of gunslinging and exploration, plus an abundance of side-missions.

The sequel to Call of Juarez (which is also worth considering), Bound in Blood is a fairly straight-laced action game.  The graphics haven’t aged well, but if you want a Wild West setting where your only objective is to move from point A to point B and shoot all of the enemies on the way, then this is one for you.

Gunslinger, on the other hand, is an arcade-style cover-to-cover shooter with a slight comic book-style aesthetic.  The game rewards points for headshots and combos as it tells its tale of run-ins with the Wild West’s most infamous shooters.

Fistful of Frags started life as a Half Life 2 mod but is now available on Steam as a free standalone multiplayer game.

Fistful of Frags is essentially a frantic deathmatch and team deathmatch with a Wild West theme.  Expect cowboy hats, bandanas and old-timey guns (plus the ability to kick opponents to death while you’re reloading your antique weaponry).  It’s a ton of fun and it’s free, so what have you got to lose?

West of Loathing fuses the Wild West with RPG elements to create a clever and imaginative game.  You get to choose your class (Snake Oiler, Cowpuncher and Beanslinger, naturally) and then head out into the stick-man style world, talking to strangers and trying not to belly laugh too often.  Sure, it lacks Red Dead Redemption 2’s incredible graphics, open world and play-time, but if you’re looking for a light, funny Wild West experience, this one cannot be beaten.  We reviewed it favourably.

As mentioned, Red Dead Redemption 2 is the number one Wild West title in existence today, but the above games are certainly worth a look if you fancy a break from traversing Rockstar’s frontier.