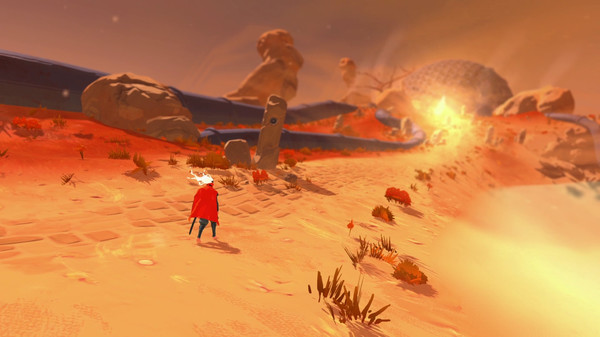 Furi is an enigma of a game. The game at its core consists of large, heavily intense boss battles with long walks in between for exposition of the world. This simple concept is what helps to make the game so great.

Furi will definitely surprise you though, as what seems to be a hack and slash mixed perfectly with a bullet hell soon becomes a gripping mystery.  It has a wonderful story wrapped up in some of the most beautiful minimalistic visuals I’ve ever seen in a game.

You start as an immortal prisoner in a very impressive jail, being killed over and over again by your captor before a strange man releases you from your bonds with one simple phrase he drills into your head: “The jailor is the key, kill him and you will be free.”  What follows is a brutal trek through nine guardians, each one more difficult than the last, and each one with their own set of tricks.

What Furi does very well is world-building. They sacrifice a lot of gaming “norms”, such as fighting minions up to the boss or various levels to work through, in favor of slow walks that build up the next fight and give hints as to how you ended up in this prison in the first place. They weave the world around you in spectacular fashion as you go further down the gauntlet of those pledged to stop you. Every atmosphere you find yourself in is also incredibly distinguished from the last, each having its own characteristics, and sometimes unique laws of physics.

Each plane you walk through is enhanced by the perfectly curated soundtrack that sets the tone for the next boss you’re about to encounter, as the mysterious man following you fills you in on why you even want revenge on this upcoming ne’er-do-well.

Without going into specific details, the story quickly makes you question your purpose as it comes to be shown how dedicated these people are to keeping you in your prison. The story manages to take a simple objective and put just the right amount of spins in there to make it feel like a completely new idea and keeps you invested in not only your character but the safety of those you’re forced to battle against.

The ‘simple’ feeling of the game also carries over into gameplay, with you being given a dash, a gun, and a sword to work with and no further upgrades to be had through the entire game. In every fight you start by taking down the enemy’s blue or “ranged” health bar, before transitioning into a close-range sword fight with them; the ranged fight being a bullet hell and the sword fight being a timing test.

Furi is a great example of what can be accomplished when a developer sticks with a simple idea and refines it to perfection. Art is the expression or application of human creative skill and imagination, and Furi represents that in more than just one way. This title pushes past the term “game,” and deserves to be called art due to its flawless presentation, displaying a world perfectly from someone’s imagination, inciting actual feeling from the story, the sounds, and the visuals. It pulls you out of the autopilot that so many games seem to try to get us in today, and immerses you into a world completely unique in it’s setting, and feeling. I’m not sitting here and insinuating that all games aren’t art, because when analyzed, every game is a presentation of someone’s imagination displayed over a screen for the world to see. But so few games realize and stick to their vision as perfectly as this, which is what puts this game a cut above the rest in my book.

The bosses can feel unrelenting at times if you play on the normal or hard difficulties, but it has the mentality of once you learn a boss it becomes far easier to deal with them. It rewards persistence and instils a sense of accomplishment when each boss falls.

There aren’t many games that represent themselves as well as this, and if anything you’ve seen or read here interests you then I would highly recommend giving it a go.  Whether you want a challenge or bullet hell or timing-based combat, hell, if you even just want to look at some pretty sights, then I would recommend Furi in a heartbeat.