From the stormy residence in Gone Home to the rugged European expanses of The Witcher 3: Wild Hunt, video game worlds have the powerful ability to give players the ability to escape into their virtual worlds.  Some video game worlds are small, some are large (and some are HUGE), but each play a vital part in creating a cohesive and rich experience for players.

PHANTOM:  I have been racking my brain recently to find the perfect video game world that I have enjoyed the most from all of the games I have played. Capital Wasteland from Fallout 3, Skyrim from, eh, Skyrim, Hyrule from the Legend of Zelda and Rapture from Bioshock. The problem I have is, which one to choose? Well believe it or not I am shooting for Horizon Zero Dawn and not just because it is a beautifully constructed world but because of the many wonders that inhabit it.

The story from Horizon Zero Dawn is one of an apocalypse but not in the traditional way we see often these days in games, movies and TV shows. This game is set a thousand years after the world fell, not just the usual 10 or 20 or even 100 years when the old way of life is still evident.

The world has evolved over this time and has many stunning aspects to it. The fact you are using a bow and arrow for the majority of the game means the landscape is, for the most part, set out in a way where stealth is available in pretty much most areas. This lends itself to huge amounts of vegetation growing wildly around the old remnants of the past for you to hide in. The superb visual artistry of old buildings that are hidden within this overgrown palace is an extremely cool aspect to the aesthetic of the game and one I was and still am hugely impressed with.

Another aspect in HZD that really makes its world stand out are the creatures that populate the land. There is a huge abundance of flora and fauna around to keep you occupied. In fact, the fauna part is a little misleading as fauna is animal life and the animal life in this game is something special. HZD is overflowing with robots but they are built to be like animals or more specifically dinosaurs. This is where I fall into my childhood and my love of all things dinosaurs comes to the fore. This game is essentially Jurassic park but for robotic dinosaurs and who wouldn’t like to mess around in that world? The enemies themselves have the names Broadhead (this is like a huge wildebeest) and a ThunderJaw likens itself to a T Rex and a tallneck is similar to a Diplodocus. These are but a few of the many enemies available within HZD.

The final element of HZD’s world is the use of augmented reality in the form of a “focus”. Within the game, the protagonist Aloy uses this earpiece to see the world differently and this can map areas and cover the land providing you with even more vivid and vibrant colours.

Overall, HZD is not only an amazing game but the world Guerilla games have created (or should I say evolved) is one of genuine wonder. I urge anyone who has not yet sampled its beauty and splendor to try it out as soon as possible.

MOSHE SWEET:  Picking Wolfenstein New Order and New Colossus’ world as my favorite may seem odd considering, you know… Nazis, but I can’t think of any gaming world that captivated as much as Wolfenstein’s world. The giant concrete monuments and steam-powered abominations all felt like some sort of natural and real progression if the Nazis actually won and it terrified the hell out of me in the best way possible.

Machine Games did such an amazing job thinking up every way a Nazi regime would look on every aspect of modern life. From nightly talk shows to block parties, everything was so sinister and felt as if one push in the wrong direction can be the end of your life. but it’s in these intense environments where the best stories are told. How impactful would BJ and Anna’s victory’s be if they weren’t up against such a cruel environment where death is literally around every corner? My money is on not so much. Every Nazi killed and mechanical dog-beast destroyed felt like you were making a difference even if it was small.

In reality, there wouldn’t be enough money in the world to make me spend an hour in a Nazi utopia but as far as video games are concerned there is no place I’d rather be.

JOHN SANTINA:  Why have one video game world when you can have two?

My first favorite video game world has to be the Mass Effect Universe (a Universe counts as a world, right?  Right?).  I’ve always been interested in astronomy and the thought of interacting with a variety of interesting alien species is a fascinating prospect.

The Citadel was a stark contrast to some of the more rural locations but each felt like a real living, breathing place in outer space.

My second favorite video game world is Bioshock’s Rapture.  I’m not a huge fan of horror (I’m a scaredy cat) but despite the endless tension, Rapture had so much character that it wasn’t hard to get sucked into its world. 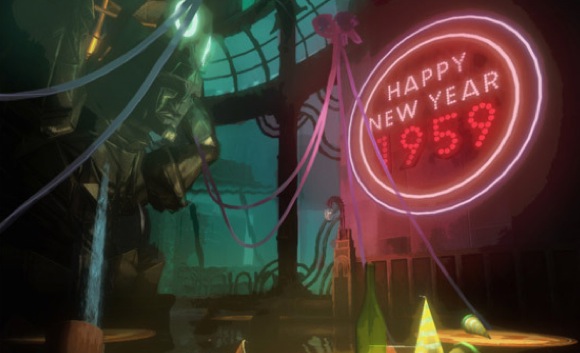 The art deco design oozed style and the wealth of varied locations within the underwater utopia made exploration a dream.

What is your favorite video game world?  Tell us in the comments!