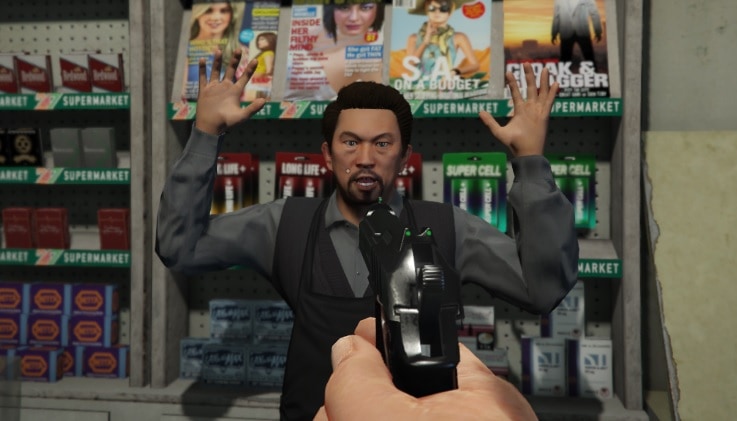 No matter how hard I try, I just can’t do an evil playthrough of a video game.  It’s not because I’m a nice guy (I’m actually a selfish jerk), games just can’t do them right.

When playing a video game with a choice system, such as The Walking Dead or Mass Effect, I always tend to play the hero.  I like to play the best version of myself to make the virtual world that I’m temporarily inhabiting that much better.  It’s what games are usually made for.  But, then again, I’d be tempted to play an evil playthrough if the options and outcomes didn’t feel so fake and, if we’re honest, stupid by not rewarding evil actions realistically.

In a video game, evil actions generally mean a short-term advantage in return for a negative outcome further down the line.  The developers add in a punishment, whether that’s your in-game friend not coming to your aid, or just a good ol’ fashioned you got less money because you’re an asshole and that’s the only justification.

Developers haven’t mastered the art of convincing storytelling in this regard and instead rely on a reward system, penalising players who take the dark path.  After three decades of being told that a higher score is better, I’m reluctant to accept a hindrance to my progress down the line in return for a “eat shit” dialogue option to a character that I’d rather didn’t exist.  I’m too value-orientated.  I’ve been conditioned to be this way and it’s far too late for me to change.

Don’t get me wrong, I fully understand why evil actions and rude dialogue options usually lead to a punishment of some kind.  If we could just kill every character in the game with no one watching, we’d be a/ very rich and b/ very lonely.  The gameplay would be boring and I’d find myself complaining about that instead.  Developers also throw in their cliche “bad” ending as a token “see, we let you do what you wanted and we paid attention.  See?  See??“

It’s just a shame that instead of making decisions and actions feel genuine developers default to long-stale methods to make their universes feel balanced when really they’re just balanced towards the players playing good characters.  Video games haven’t found the way to make it rewarding to really play a game however we want – even if that’s being an evil psychopath.

Why can’t I become the ultimate villain in a video game?  Why should I be punished for that with fewer points and rewards than the guy who said please and thank you?

Can’t I at least just tell every character that they’re useless and that I hate them without being unable to save the world at the end?  My attitude towards the characters in the game shouldn’t force me into a set of pre-rendered cutscenes where I’m forced to watch the fate that the game developers have decided that I deserve – I can be the rude, aggressive loner who takes down the aliens single-handedly while flipping mankind the finger.  Probably.  I’m pretty badass.

Okay, so I’ve used some examples for comedic value and generally just to be ridiculous, but ultimately, I just want a fair system.  If you’re going to let me be evil, at least let me a/ be properly evil and b/ still see the game through to the end without being held back by a half-baked morality system.  As video games make strides towards photo-realism, they should also be making strides towards creating realistic worlds with a logical risk-reward balance and an authentic good-evil system.