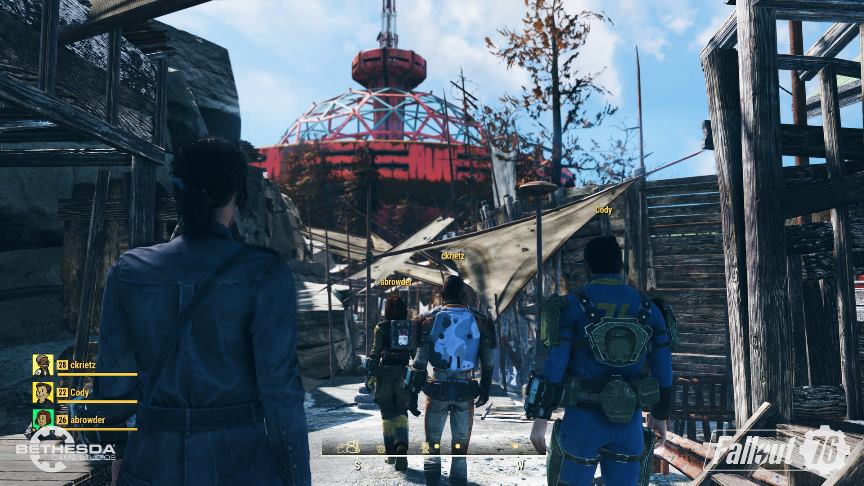 Fallout 76’s release date is fast approaching. With it, thousands and thousands of gamers will heed the call of Bethesda’s latest installment of their juggernaut Fallout franchise and take to the post-apocalyptic wastes of West Virginia for the first time.


The game has been substantially hyped for a long time now, with countless press releases, teaser footage, and most recently, actual gameplay footage as well as the long-anticipated (and somewhat disastrous) Beta launch.

I like Fallout. I really do. While the original 2 Fallout games will remain my favorites, Bethesda’s interpretation of the franchise has revitalized it and created a whole new army of fans, much the way Skyrim did for The Elder Scrolls. While each contemporary installment has fared better in some ways than others and we all have our favorites (New Vegas baby, I don’t care that you’re buggy as hell!), they have all been substantial commercial successes. Naturally, we all want more Fallout.

But not at the cost of lacking in content or missing the spirit of the franchise.

My primary gripe with Fallout 4 (and for an even playing field we are going to discuss vanilla only, no mods) is that the game, while certainly the most visually impressive and commercially successful of all the Fallout games, replaced a lot of meaningful substance in place of “flashier” more shooter style gameplay and less player control in decision making. The improved gunplay made gunfights more interesting, but the omittance of more meaningful dialogue and text conversations removed a significant amount of choice and immersion from the game, and for me at least, made the game feel a lot shallower than its previous counterparts. Sure, it was a big world, but at the end, once you dug deeper you realized there wasn’t as much there as you would’ve liked. It would be wonderful if future installments attempted to reintroduce more of the meaningful choices, strong narrative and depth that was more present before.

This concern leads me to my point with Fallout 76. In recent years, the concept of “wide as an ocean, deep as a puddle” has been talked about quite a bit in the videogame community. There have been plenty of instances of developers overpromising on what they will deliver and either releasing products that are either essentially unfinished and shallow like the PR nightmare that was No Man’s Sky or that basically just live in a perpetual state of Early Access. Many of these games have touted having these sorts of massive, open world concepts. To be ambitious enough to want to create these gigantic, borderline infinite gaming universes is, of course, every gamer’s dream, but not at the cost of misleading consumers or releasing a subpar product lacking content. It’s key that we hold developers accountable to be ambitious while still being reasonable, so that we, the consumer, aren’t taken advantage of, and so the developer can still be successful enough that they can still make games for us to enjoy. As gaming tech advances, these worlds will only continue to grow, but if you’re going to make “massive, open worlds” such as these, it’s vital that those worlds truly feel like the massive, rich and deep worlds they represent, where literally everything has meaning. And that’s not an easy feat.

The problem with Fallout 76 is that thus far from what I’ve seen of the game there is little in the way of depth and little in the way of a point to play it. Yes, the world is huge. Yes, it is open. And it is pretty to look at overall. And yes, there are people you can play with. But, beyond that, there seems to be very little to do. And honestly, aside from the game’s external appearance, there is not much particularly Fallout about it. Much of the gameplay I have viewed seems frustratingly tedious and repetitive. Shoot some things here, run over there, shoot some more, explore a house only to discover there’s very little in the way of anything there, rinse, repeat. One of the concerns voiced by gamers who have played the game thus far in its early stages is the disturbing lack of content at locations, with some exceptions.

But by and large many places, once visited, yield very little in the way of meaningful stories, quests, or loot. This is problematic. Because as the initial enjoyment of playing for the first time wears off, gamers may find that running around and killing stuff feels very shallow and lacking. Games don’t necessarily need super deep content or lore and quests to be interesting. But if they don’t have that, it is made up for in other ways, either through specific game mechanics like combat, puzzle-solving, etc. But nothing about 76’s combat is remarkable enough to hold your attention. It’s not Doom. And since it is an RPG, it should have a heavy story and character development mechanic to it. But at the moment it really doesn’t look like it does, which is contradictory to what Fallout games have traditionally been about. Having other people to play with may help to alleviate the experience for a time, but again, that will only last until the content dries up.

Now, Bethesda has been pretty open about the development process of this game, and they are not strangers to MMOs anymore as The Elder Scrolls Online has been online for quite a while now and remains popular. When Elder Scrolls Online released it too struggled to find its balance, though eventually, it did.

As of the time of this writing, the Beta for Fallout 76 has gone live and feedback from its first run on November 1 was a bit of a mess, with a major download bug breaking the game for many people to framerate issues and just general bugginess. And of course, it is only just a beta, so bugs are going to occur, however, as a beta version whose launch is mere weeks away it should at least be playable, so seeing so many major issues reported across the board is concerning. There are still two beta dates to occur this weekend so hopefully, they can resolve some of the issues that occurred on the first go-around.

Fallout fans wanted another Fallout. There was no question of that. The problem is this: So far, this isn’t it.

Is it possible that the game could become something much better and polished a couple years down the road and develop a flourishing community like Elder Scrolls Online has? Absolutely. But on the other hand, its completely possible the game will polarize the Fallout community and potentially drive fans away, especially if they are unable to capture the spirit and the chaotic magic of the Fallout franchise. It’s not enough to just skin a wide-open world in a Fallout theme, drop a bunch of players in it, add nukes and call it Fallout. Players want depth, and lore, and characters, and lots of Nuka-Cola. They want an interconnected universe where no matter which way you look there is an adventure. If that adventure can be had with friends that would be awesome, but the adventure, and the mystery, must be there first.

It won’t be long until Fallout 76 makes it debut. While I have my concerns, I’m hopeful the game will prove me wrong and turn out to be a fantastic installment in the Fallout franchise. Did we need it? Probably not. But maybe it can prove to us that we did.