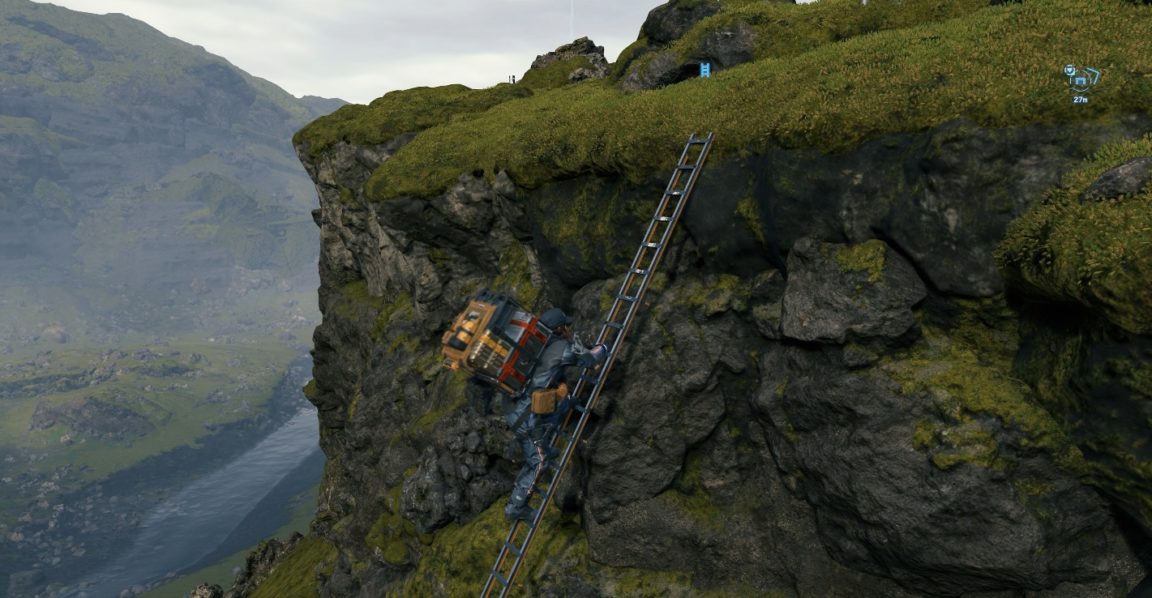 Is it me or was the 49 minutes Death Stranding gameplay preview from TGS 2019 kind of… lame? Blasphemy! I know but I just can’t help but feel underwhelmed. When I first heard the man, the myth, the legend Hideo Mother-Effin Kojima was making a new Story-driven PS4 exclusive I was ecstatic. Like so many, Metal Gear Solid was my jam, but this new project just isn’t doing do it for me.

Before TGS 2019, very little was known about Death Stranding. We knew the cast; we knew it was an action game (or Strand Game as Kojima eloquently put it) and that there would be some sort of multiplayer elements. Since its reveal, we were drip-fed information about the game and the mystery around it was intoxicating. Every hint and bread crumb lead to wild theories and every weird new trailer just added to the excitement. But now after finally seeing the latest showing a lot of my excitement has died down.

Players control Sam (Norman Reedus) and are tasked with traveling the barren American wasteland in hopes of reconnecting its people. That’s the gist of it… I think at least. The story has that special Kojima level of schlock that his games are known for. It’s melodramatic, and it’s great. The characters look weird and interesting and the world seems beautifully realized. It was the gameplay that really threw me off though.

What I’m hung up on is that Sam is literally a delivery person. You’re on a mission given to you by the President, but essentially you’re a glorified USPS worker (USPS is an American mail provider). Are you fricken serious? 90% of the gameplay video comprised Sam walking across different terrain delivering packages. It looked beautiful, and the landscape is breathtaking but it was so damn boring. Sam would walk for miles and miles managing the weight of his shipments, dropping off packages, picking up new packages, taking a bath, changing shoes, and walking across ladders. Of course, I’m simplifying it a bit but essentially that’s what it was.

The demo previews what looked like an exhaustive menu system where Sam can prepare for his trek. He can choose what equipment to take like weapons, different tools, and specific uniforms. Unlike most games, the inventory is placed on Sam’s actual body, so weight management and balancing of your items and packages is something to keep in mind. I won’t lie, seeing Sam carry a truckload of stuff looked pretty damn cool. You decide where and how everything gets carried and doing so will dictate Sam’s mobility.

When out on the extremely long walk, Kojima showed off how Sam can scan terrain so to plan the best possible route. This included elevation levels as well as water currents in rivers that you might need to cross. It was cool seeing that Sam will be affected differently depending on where he walks in the river. One spot might be easy to walk through while another might cause the current to sweep Sam.

As you would imagine, there is meticulous attention to detail showcased within the game. It’s impressive no doubt to me feels like too much. I guess it’s cool that foot damage and boot degradation is a thing, but I feel like that can get annoying quickly. It looks like there is a ton to manage. Aside from the actual cargo weight, there is blood level management, balance management, Facebook “likes” (not joking) management, stamina management, and baby management. 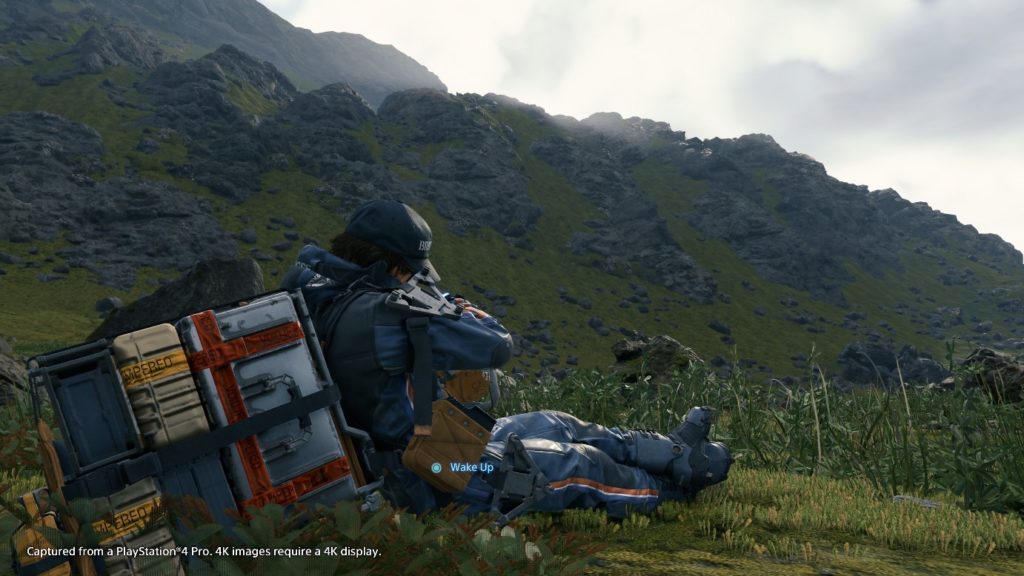 It almost feels like it’s actual manual labor instead of a fun video game. I was watching Sam struggle to carry 15 packages scattered all around his body up a mountain and I started sweating. My back started to hurt, and I felt like I needed a nap. I don’t know about you guys, but I work hard enough. I don’t want to lug more packages on my downtime.

The Facebook system within the game that tracks “likes” is weird.  Really weird. I’m assuming other players “like” certain in-game actions, but I’m still a little foggy on this. This system played into the whole multiplayer aspect of Death Stranding. It seems as though players will be able to leave equipment around the world for others to find and use. For instance, there could be a long gap Sam needs to cross, but you forgot your “gap crossy thing”. You can find one that another real-life player has left lying around or even call out and request something from someone. It can even be bigger things, like whole bridges that other people built.

A lot of the stuff you use will be left for others to discover. It seems like everyone is playing in the same world but in different dimensions. Players can also leave stuff in lockers for other players to find and use. It seems minimally intrusive and promotes the theme of the game, so I guess it’s alright if not a little uninteresting.

Believe it or not, there was also some combat shown. Honestly, it was standard third-person stuff. Over the shoulder shooty guns, weird grenades, silent stealth takedown, and the likes. It looked fine it looked a lot like Metal Gear Solid V combat. It felt like it offers a ton of freedom and allows you to tackle the scenario as you see fit. Stealth, guns blazing, whatever. This is speculation, but I feel safe in my assumption.

The demo also showed those weird black tar looking monsters. Sam has to silently navigate through them while holding his breath; it was pretty cool. Eventually, it all culminates in a boss fight against a giant tar-dog monster thing. Again nothing offensive here, just mundane action-adventure stuff. Nothing wowed me. I never felt excited at all. The fight eventually ended and guess what was next: more walking. Oh, wait I’m lying – Sam finds a motorcycle, so now you can vroom-vroom across the vast nothingness in a cool bike. Ka-chow!

Eventually, the demo ends when Sam reaches his final destination. He drops off the packages, heads into his sleek living quarters and takes a shower… and I’m snoring.

I’m positive that I’m missing some details from the preview; it was in Japanese after all. I tried piecing together what I saw combined with reports from various publications. But this is just my take away and how it all made me feel. You might feel differently and this could be the most amazing gameplay preview of your life. I respect that, but for me, it was sub-par. I’m not here to change anyone’s mind but just to speak my own. All in all, Death Stranding feels like a management simulator more than anything else. Manage your vitals, your baby, your feet, etc.

Maybe once I get my hands on it, I’ll be in love, just like with earlier Metal Gear titles. After all this, I can’t deny that this game is, in fact, the most Kojima game ever. It’s got his name written all over it but maybe it’s a little too much.

I get it. I’m being very critical of Death Stranding but I promise it’s because I want it to be the best game ever. I’m worried, but I’m still hopeful.

I may eat my words come November. Hideo Kojima knows how to make video games and I learned a while back to never take his work at face value. The story still looks like it could be awesome but the worrying thing is the in-between part, you know, the game. Will I just be delivering packages, taking mud showers and peeing on mushrooms? If so, I’ll just get a job with UPS, at least I’ll get paid.