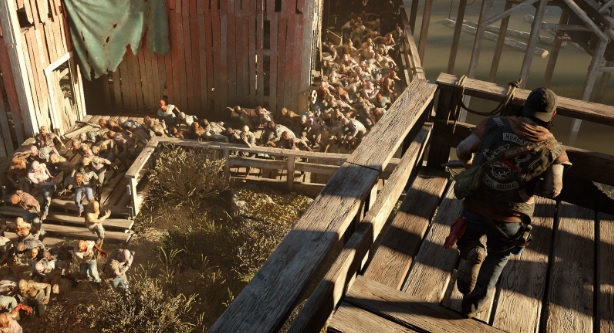 When Days Gone was revealed in 2016 it turned heads, but as more and more time goes by I worry more and more about the PS4 exclusive.

I know it’s going to be a controversial view, but I don’t see how Days Gone could possibly live up to the hype.

Overall, PlayStation 4 exclusive titles have been phenomenal, with just a few minor exceptions (ahem, Knack).  Horizon Zero Dawn, God of War, Persona 5, Until Dawn, Uncharted 4 – Sony has spoiled us, really.  Sony has given their gamers the best exclusive titles of this generation – though I still look enviously at the Legend of Zelda: Breath of the Wild but what non-Switch owning gamer doesn’t?

But, back to the script: PlayStation 4 exclusives have been exceptional and Days Gone has a lot to live up to.  And that’s part of the problem.

I was as excited as anyone back in 2016 when SIE Bend Studio’s work in progress dominated headlines.  The tech demo was certainly impressive, with a The Last Of Us-esque presentation and seemingly infinite hoards of zombies (um, sorry, Freakers…) storming through its gorgeous open world.  It looked like one more reason to gloat to my Xbox One-owning buddies and yet another phenomenal title to add to my growing collection.  I wanted it.

In hindsight, the impressive tech demo camouflaged the fact that Days Gone’s premise is, well, generic.  Players control Deacon St. John, a former outlaw-turned drifter and bounty hunter (because, of course he is) who lives a life on the road.  The game takes place a few years after a global pandemic killed almost all of humanity, and transformed millions of others into mindless zombie-like creatures.

Fast-forward to 2018 and the video game industry has a different landscape.  State of Decay 2, a very similar title, has proven to be pretty average and gamers have been inundated with large, interesting worlds to explore.  Days Gone promises an expansive map to explore on your motorcycle with typical survival mechanics that we’ve seen in dozens of other titles, mixed with an action-shooter.  Both of Days Gone’s two halves have been done so many times that they’ve long gone stale.

The sad truth is, the more we see of Days Gone, the more lacklustre it looks.

Freakers, while impressive from a technical perspective in a huge hoard, appear to suffer from predictable AI, while the gunplay looks below-average at best.  The game world, while beautiful, looks bland and uninteresting.  It’s just another virtual world you’ll visit and never think of again.

It could be the same old story for SIE Bend Studio (formerly Eidetic); a few decades ago they brought Syphon Filter to the PlayStation – a decent game but one that was overwhelmingly overshadowed by Konami’s Metal Gear Solid.  Syphon Filter was good (heck, I remember it fondly), but ultimately not one that features on any top 100 lists of the generation.  It’s just another half-decent game that was forgotten.  With Days Gone being Bend Studio’s first console game since Syphon Filter: Logan’s Shadow in 2010, the stakes are high but they’re operating within an industry that has had an abundance of survival and zombie titles.  They’re creating a game that the industry no longer needs.

Days Gone has been delayed to Q1 in 2019 but it just doesn’t feel like there is enough time to change the direction that this game has taken throughout its development.  We all hoped that it would take the zombie survival genre to the next level, but it doesn’t seem to be making the improvements required to become anything more than a game you describe as being like something else, but not quite as good.