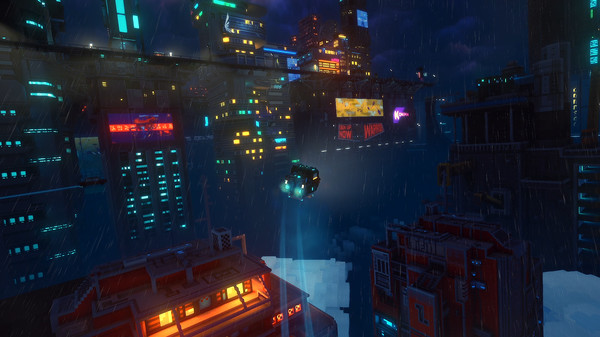 Part of the joy of videogames is how they mash together such a wide range of artistic disciplines. Like Frankenstein’s monster, they are a series of misaligned parts that aim to come together as a whole. The work that must be involved in combining the coding with the art direction, with the physics, with the script is mind-boggling, but it is most successful when we aren’t even aware that it has happened.

I spent 14 hours working my way through Cloudpunk’s story, time spread inconsistently across a pandemic and its related responsibilities. It was a journey of exploration, both within the game’s city of Nivalis and around what the game was, how it was formed and how successful it was.

Anyone with a passing awareness of Cloudpunk will be aware that the star is the city – a vast metropolis quite clearly influenced by Bladerunner and Fifth Element – and that your role within it is that of a delivery driver. Hours are spent dipping in and out of its high-speed motorway lanes, seedy back alleys, degenerate slums and the perpetually rain-soaked neon-lit hubs in between.

Due to the voxel art style, it is both vast and child-like at the same time. Like the world’s largest Lego set, with you shrunk down to play within it. Inside your flying HOVA, you bob over and under and in and out of the endless buildings before parking up and wandering around on foot. It’s seamless, fully immersive and a pure pleasure to experience. In the early hours, I pondered whether it would be better if it was more ‘realistic’ in its visual style but I quickly discounted this. Because something about this place – simultaneously full of up-front movie set ‘wow’ but also dark, hidden, confusing corners of existence – feels unique. It also, in retrospect, makes it the perfect setting for the story.

When we start a new game, part of our internal process as an experienced gamer is to figure out the rules of the world. Can we jump? Can we go inside buildings? Is there an inventory? With Cloudpunk in particular, I felt I spent the early hours unsure as to what type of game it was wanting to be and what my role in it was.

The driving and delivering may suggest something akin to Grand Theft Auto meets Crazy Taxi, yet there is a distinct lack of peril. Apart from a couple of missions very late on, there is never a timer. In fact, on occasion I would complete a drop-off whilst the pre-mission / story chatter was still going on and I’d have to wait for the characters to finish to proceed.

This was indeed the first clue to what this game is about. Your character is Rania. She has an onboard automata called Camus who is the disembodied voice of her dog. And there is Control, the grumpy but nurturing voice on the end of the line who sends over your latest orders. Through your evening’s work, you then meet a huge cast of characters who vary greatly and through them, we learn more about Nivalis, Rania and what Cloudpunk is all about.

On paper that suggests itself as something in the mold of your modern open-world games. But all the missions are completed in a linear fashion. There are very few that you could consider side-missions. Instead, it operates more like a novel, with each mission being a mini-chapter that often feeds into the overall arc of the story, with themes and ideas only becoming clear over time. This is partly why it probably took me so long to work through the story in real-world time, despite the fairly short game time. It’s easy to dip in and out.

Game reviews picked up on the element of choice. An early mission offers you the option to deliver a bomb to its intended location or to dispose of it. It feels like an important moment but there are no branching storylines (from what I could tell) and it felt like a case of reviewers only playing the first hour or two to make their judgement. It hints one way, but the game never makes it there; the only repercussions are what you may feel about it yourself.

Initially, this felt disappointing. But interestingly, even though I’d learnt that the choices don’t hugely matter in the game, later ones became tougher. And I put this down to one thing; the writing.

First up; I feel that they got the protagonist Rania spot on. I’m so sick of games where I play a faceless cipher for a story the developers want to tell. Unless you go full-on faceless and make them a mute Gordon Freeman clone, it’s not enough. Whether I am a master assassin, Jedi Knight, King or General, I’m often left thinking ‘I wouldn’t say that’ or more troublingly ‘why am I doing this?’

Here, Rania is a fully formed character that will often ask the questions I would ask. She brings up inconsistencies, talks back at characters when they give her bizarre missions. She is new to the city, so it is the classic trope of us seeing everything through the eyes of someone as new to this as us, but she’s also worldly and smart. She may audibly roll her eyes at some of what we hear, but she’s also poor and needs to earn some money. It makes sense she’d put up with what she comes across and plough on.

Alongside her, we have a cast of characters that veer all over the place. In a novel or movie, there is little chance they could hang together cohesively. But within Cloudpunk, within the episodic format of working as a delivery driver and within Nivalis, like a classic cyberpunk character composed of countless augments from hundreds of previous owners… it somehow works.

Some characters are like Douglas Adams creations even he felt too wacky to make the page, whilst some would be the villains in a Bladerunner spin-off. Equally, almost every sci-fi and cyberpunk narrative cliche is thrown at us but remixed in ways that usually feel new or at least appropriate to Nivalis. Some may find the tonal shifts immersion breaking, but for me, it helped enlarge the world. And it fits with the Frankenstein approach, thematically adding to the undercurrent of insanity and something not being quite right in Nivalis.

And for a game that is completely voice acted (i.e. we only see stills of characters on screen when they speak, and the in-world characters are basic and blocky) I found it surprisingly affecting. Genuinely weird people that made me laugh. There’s some slightly on the nose satire perhaps but there are properly touching moments too that will stick with me.

On final reflection, the parts that I feel could be considered ‘missing’ are all game-based thoughts. I liked not having a map full of mission icons, but some slight choice might have been good. The various collectibles around the game felt like a superfluous addition – thought I may enjoy flying around to collect them post-game. For such a large, intricate environment, I’m surprised there weren’t any racing sections or more ‘against the clock’ scenarios. And I couldn’t help wondering what this game would feel like with guns, upgrades or hacking.

But those elements would have added to the ‘game’ part of the experience, not the story. Whilst part of me feels the creation of the world was done by one ‘department’ and the ‘story’ by another, and what we have here is the result of them being squashed together much further down the line, I can’t fault either part and if there was a battle as to how that would work, it looks like the needs of the story came out on top. For me, that’s a massive positive for both my experience as a player and for the industry as a whole.