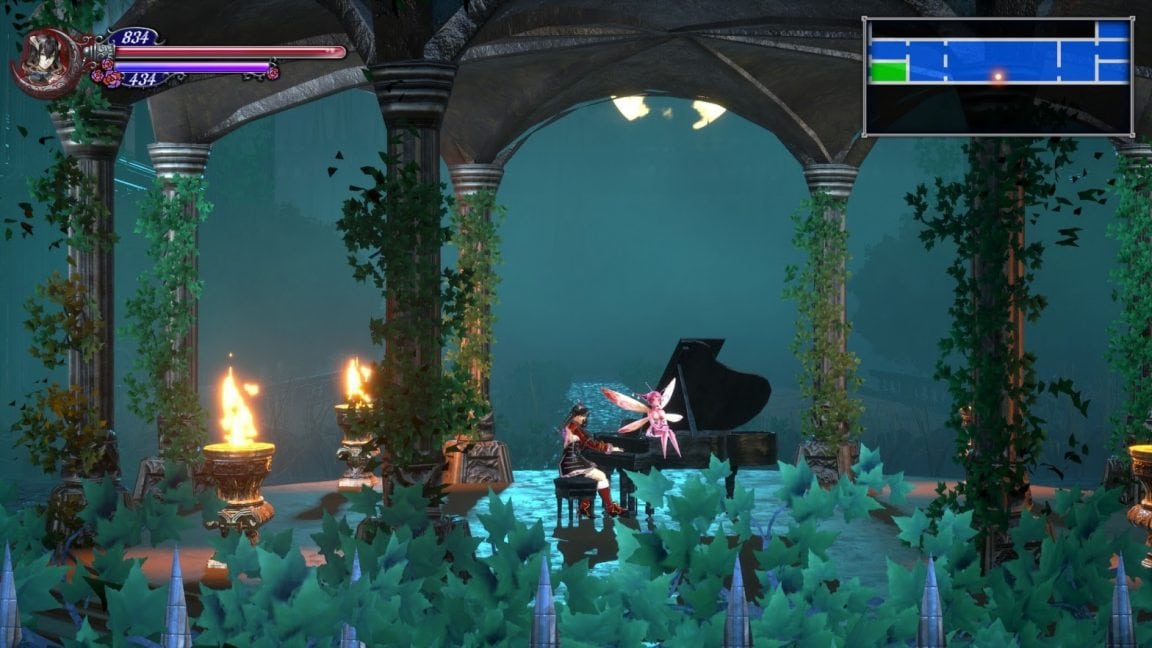 One of the most popular genres of game today has to be the Metroidvania niche. A genre cultivated and named by the wonderful Super Metroid and Castlevania: Symphony of the Night. In essence, a Metroidvania gives you a large map to explore with parts of the map being inaccessible until you find a power later in the game that allows you there, rinse and repeat this process with most new areas you discover until near the end of the game you’re so loaded up on powers that you feel like a demi-god. Currently, it’s a genre with many heavy hitters in it, Hollow Knight and Dead Cells being the most talked about. Starting back in 2015, however, the brilliant mind behind Castlevania: Symphony of the Night announced he would be working on a new title that will rekindle the same feel as his PS1 classic, called Bloodstained: Ritual of the Night.

Holding up to a game as praised as CSOTN is a heavy fate for any title, but after four years, a massive Kickstarter success, and many delays the game finally released to all systems and the Steam store with much critical acclaim. The bar was held high for the game and it delivered with flying colors, with a brilliant story, wonderful 3D graphics in a 2D setting, very tight controls, and a soundtrack that ties the demon-killing adventure together. The story follows Miriam on her adventure to save her friend and childhood torture mate Gebel, or kill him if she can’t save him. Twists ensue that I refuse to spoil for anyone here, but multiple endings are present and the map feels genuinely bigger than CSOTN ever was. Of course, your character is completely customizable with different hats, hairstyles, facial bling, and dye for your clothes, as well as several weapons and spells to customize your play with.

The difficulty also never felt unfair to me, as if you were getting kicked around by a particular boss, you could always go off and grind for levels or gather a new spell or two that might be able to help. The only boss that I found to be unrelentingly difficult was an optional boss that is a self-insert of the creator himself, Koji Igarashi, and that’s perfectly okay because the guy made the game, he should be difficult! Ultimately, this title lived up to the game it’s supposed to be a spiritual successor for in every way it could, bringing very similar gameplay from CSOTN but expanding upon it in very welcomed ways. They also managed to make each different area feel unique to themselves despite them all being in the same castle, and while I know that is expected of any game with a large map now, I still can’t help but marvel at how pretty this game can be at times.

As I see it, the way the game released was already perfect and I felt I had gotten my money’s worth on this title, but that huge success it had on Kickstarter made sure that there was much more to come. Along with two other games released to compliment this one (dubbed Curse of the Moon), there had been many promised features of the main game that rolled out very slowly over the next year. The first big update we got would see a new character and two new modes added into the game, a boss rush, and a randomizer and the second large update that came out earlier this month saw a second new playable character added into the mix. While the game modes are fun and challenging, no one can deny how fun it is to play through a game you’ve beaten with a different move set, and the two characters we have gotten, Zengetsu and Bloodless, feel so different that at times it can feel like a different game.

Zengetsu shies away from the spell and sword combo that you grow accustomed to as the main character, Miriam, in favor of abilities that you input similar to a fighting game that revolve around his swordsmanship. Add in some throwing knives and a grappling hook and you get a very mobile and lethal samurai play through! Bloodless feels the furthest from the main game, however, by taking the form of a blood mage. Every attack you have is in some way based around blood, and either costs blood to use or gives you blood from what you’re attacking, she also comes with a similar floating mechanic to Princess Peach in Super Mario Bros 2 and it leads to a much more “mage” feel in the playthrough. Both modes are incredibly appreciated, and unique enough to warrant further playthroughs even after you have 100% the main game.

All in all, this game should be viewed as an example of how to properly use Kickstarter for the project you want, delivering what you promised and more for the fans. It also stands to show just how polished the Metroidvania genre has become since it’s early ventures. The ability to keep someone playing after they have finished the game is a very rare sight in a lot of games nowadays, and to me, that is the sign that this game is of great quality.