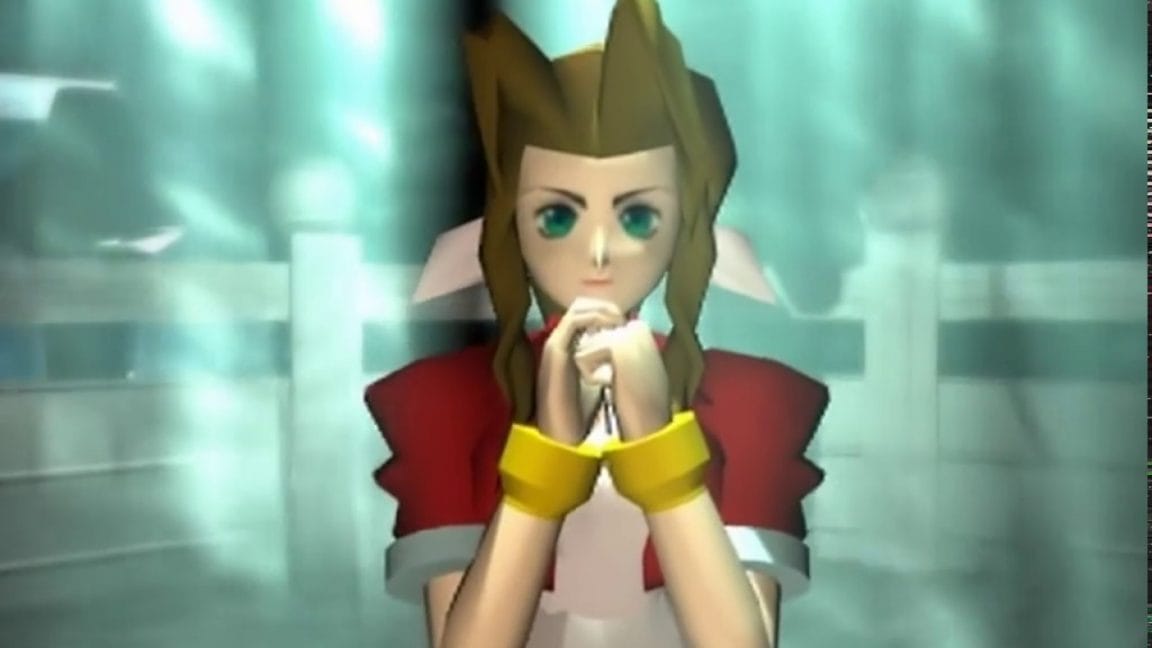 BY TIMMY SNOW: An opinion I’ve long held, and gotten into many heated arguments with friends about, is Aerith’s importance to the Final Fantasy VII story. Maybe it’s because of how young most of us were when the game originally came out that people forget Aerith was more than just “the one who dies,” or maybe it’s because Cloud and Sephiroth take up most of the space in people’s recollection of Final Fantasy VII.

Whatever the case, I’m here to tell you that Aerith Gainsborough is indisputably the main character of Final Fantasy VII.

Foil to the Villain

First, Aerith is the foil to Sephiroth, the main villain of Final Fantasy VII. This is represented in-game in a variety of ways, the most obvious being their iconography. Sephiroth is associated with fire and destruction, and some of the first images we see of him are his silhouette in front of a burning background. Aerith is associated with water, as seen in her Great Gospel limit break and in her death scene, in which she is laid to rest in the water of the Temple of the Ancients.

Importance to the Story

Now, I know some people may be offended that I’m implying that Cloud isn’t as important to the overall story here, but think about it. For the first half of the game Cloud is actually a hindrance to the overall plot, as Sephiroth uses him to keep tabs on the heroes and eventually hand over the Black Materia. This doesn’t mean he’s a bad character, and I would even dare to say that his character arc is one of the defining events of Final Fantasy VII that make it so memorable.

But it’s hard to look at Cloud’s role prior to Aerith’s death as much more than a hindrance. He cares little for the overarching goals of his allies, and is simply a part of AVALANCHE to begin his mercenary career and help an old friend. The growth we later see in Cloud as he remembers his past and becomes more open with his emotions is a powerful narrative tool that helps players invest more in the story. And it’s Cloud and the gang defeating Sephiroth at the end of the game that allows for the planet to be saved.

But it’s still Aerith who saves the planet by channeling the Lifestream into a force that can counteract Meteor. It’s Aerith who Sephiroth went out of his way to kill, because she was the only person in the game who had the ability to stop his plans. And it’s Aerith’s casting of Holy, which cost her her life, that gave our surviving heroes the chance to thwart Sephiroth’s plans after defeating him.

The Power of a Local Florist

Aerith’s death was one of the first times a videogame shook me to my core, and the cultural impact it had on the gaming community is undeniable. But in remembering that singular event involving the character, I feel as if the character herself gets misremembered or ignored. Aerith didn’t die because she was less capable or less important than the other heroes, she died because she was the only character Sephiroth feared could thwart his plan. She was the most important hero in the party. And the end of the game proved Sephiroth was right, though even death couldn’t stop her from saving the world she loved.

The Final Fantasy VII Remake has breathed new life into all the characters, but as a big fan of Aerith I was especially excited by her depiction. More than that, the scenes in which we see both Aerith and Sephiroth has given me reason to hope the Remake will continue to give our girl the reverence she is due. While I won’t expect too much straying from the overall story we all know, I do hope they continue to position Aerith and Sephiroth opposite each other in ways that make it clear she is his foil. And who knows? Maybe she’ll even defy destiny this time.