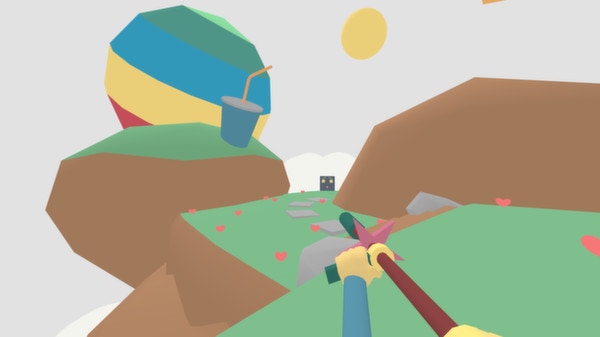 BY FERNANDO ARREOLA: Am I the only one that hasn’t played many first-person shooters recently? Waiting behind cover for the red around my screen to disappear just became boring, and I frankly don’t have the time or interest to git gud at competitive multiplayer modes.

The FPS genre still seems to be everywhere. That alone makes me sick to even think about shooting in the first person, even if it was at one point my favorite genre.

Nowadays, indie games that are smaller in scope have taken my interest. Games that are designed by a small dedicated team with unique visions and mechanics.

If games like Celeste and Undertale are art, (most) FPS titles provide the instant gratification of a dumb action movie. And who says that’s a bad thing? Things are so serious nowadays that I want a dumb distraction from time to time. No fluff, no deep themes, just fun, ridiculous gameplay.

If you haven’t been a fan of this genre for whatever reason I think right now is a great time to start.

So here are 5 single player FPS games that I used to get back into the genre that got me into gaming, all with approachability in mind.  These would be the perfect FPS games to play for non-FPS gamers.

What better way to start getting into the genre than a retro-inspired shooter?

If you’ve never heard of Serious Sam, fans can think of three things that set his games apart from the rest: lots of guns, crazy and varied monsters, and large amounts of those monsters.

Around 50 enemies will be coming over a hill. You change to your revolver rocket launcher to thin them out from afar. Then the laser gun comes in handy for medium range encounters. Finally, you switch to the double barrel shotgun to turn the remaining hoard to gibs.

It’s focused on just straight up killing monsters for fun. It makes for a great casual experience. If you want to pick up a copy of the First Encounter, it’s on Steam for $5.99.

However, maybe you want to try something with an even less serious presentation.

If you like the idea of FPS gameplay and want a light take on it then Lovely Planet is for you.

Lovely Planet’s presentation is refreshing, especially for the genre. Colorful worlds made up of pastels and geometrical shapes with angry faces as enemies. You shoot them with a wand gun until they shrink into nothing. All while happy synth music plays in the background.

It seems like the developer saved all their maniacal ideas for the gameplay. It is most similar to Super Meat Boy or any hard platformer where you have to play the same short level over and over again until you manage to complete it. The game forces you to memorize the perfect pattern of shooting and platforming to beat a stage. It might take 10 or 15 tries of the same 30 seconds of gameplay, but it feels so rewarding to complete.

If you want an engaging challenge with a fresh presentation, I think this can’t be beat. And it’s only $5.99 on Steam.

Try the next game if you want something more grounded with more realistic visuals.

Call of Duty has probably some of the most satisfying movement of any game. And no game mode takes advantage of it more than its bonus mode, zombies.

Multiplayer can be too competitive for my rusty skills and the campaign is exactly the reason I don’t play FPS games anymore. But running around with a horde of zombies coming from every direction gets the blood pumping.  The mode is exhilarating and action-packed, forcing you to make the most of Call of Duty’s renown snappy and refined movement to keep mobile as the undead keep on coming.

Plus, it begins slowly. Zombies limp towards you. Giving you time to set your sensitivity and get familiar with the movement. As rounds progress, the zombies get quicker and tougher. By the end of the game, you’ll be snapping from zombie to zombie, sprinting and weaving, and acting like a super soldier.

Also this is my choice if you only have minutes, not hours, to game in between life’s responsibilities. Matches don’t typically last more than 40 minutes.

Most Call of Duty titles released since 2014 have this game mode, so you might already own a game with it included. My favorite is the version in Black Ops 1 if you need a start. It’s $40 on Steam but with little searching online you can find it for around $20.  It also regularly goes on sale.

It is all around a great way to experience 3D movement but the AI is pretty simple and doesn’t leave much room for strategy.  If you’re looking for a bit more strategy then you should try the next game.

The groundbreaking gameplay and design of Halo will force you to strategize as the enemies artificial intelligence will keep you on your toes. Foes jump away from grenades, hop in vehicles and will even change strategy depending on what you do.

You are forced to change weapons and tactics yourself. Maybe picking off enemies with a sniper is the best option. Slowly killing enemies without the brute in charge noticing. Or you can go in all guns blazing on a Ghost and ram into the leader, leaving the foot soldiers in chaos and giving you the chance to finish them off with a shotgun.

Every encounter in Halo is a chance to practice thoughtful playing. Your approach is everything. You can get The Master Chief Collection on Steam and Xbox One for $39.99.

With Halo’s chess-like gameplay, solid movement, awesome arsenal, and amazing visuals and world, there’s no FPS that stands up to it. Well, maybe one.

The father of all FPS games, Doom, still holds up as a fast-paced shooter. What more can you want from a game than fast movement, cool monsters, and even cooler guns to kill them with?

The tone is set perfectly with a badass heavy-metal inspired midi soundtrack and textures and locations straight out of hell. I challenge you to find something cooler to shoot at than a literal Cyber Demon.

The movement might feel slippery at first but once accustomed, is your most reliable asset. Doomguy can quickly dodge projectiles and get up close and personal to finish the job. The decent AI, a wide variety of guns, and stellar level design leaves room for many strategic measures.

Being the original blockbuster FPS, it does not have the luxury of pulling from almost 30 years of FPS game evolution and experimentation. Despite this, the design shows what makes FPS games so great. Immersive worlds, fast movement, active strategizing, and most of all, non-stop action.

The original Doom has decent ports on all the consoles for $5.99 including Steam. Doom is a must play in my books if you want to get familiar with the genre.