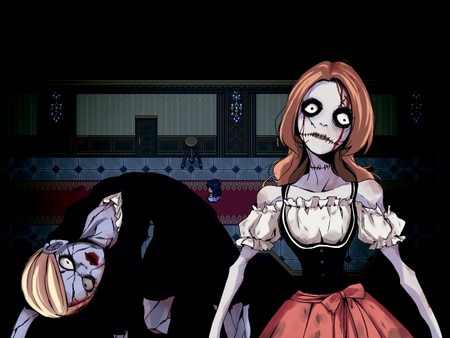 October is the definition of spooky and, with Halloween fast approaching, we need to rely on other means to enjoy this scary festivity.

Here are 10 horror games you can play—alone and in the dark, of course—this Halloween.

Visage is a first-person psychological horror game set inside a huge house in which terrible things have happened. Explore a mysterious ever-changing house in a slow-paced, atmospheric world that combines both uncannily comforting and horrifyingly realistic environments and enjoy a genuinely terrifying experience.

Mad Father is an exploration-based horror-adventure game, created by Japanese developer sen. Playing as Aya—the main character—explore your family’s sprawling manor (and unravel its dark secrets) while making use of the items you find along the way and doing whatever you can to survive the night.

Layers of Fear is a first-person psychedelic horror game with a heavy focus on story and exploration. Delve deep into the mind of an insane painter and discover the secret of his madness, as you walk through a vast and constantly changing Victorian-era mansion. Uncover the visions, fears and horrors that entwine the painter and finish the masterpiece he has strived so long to create. Dare you help paint a true Masterpiece of Fear?

Separated and afraid, two girls must brace themselves for the terrors of the night and face the darkness to find each other and make their way home. Hide behind bushes and signs as enemies approach you and use items you find in the woods and in town to solve puzzles and distract ghouls. Then, discover notes and mysterious writings that may lead to something more haunting than you can imagine…

Song of Horror offers a truly dynamic terror experience: its antagonist, the supernatural entity known only as The Presence, is controlled by an advanced AI (Artificial Intelligence) that adapts to your actions and decisions. Experience unbearable fear as this otherworldly being responds to your way of playing and hunts you down in unexpected ways, offering a unique experience to every player and gameplay where tension builds up naturally instead of coming from scripted sequences.

Suite 776 focuses on an intense environment of pure suspense, horror, and mystery. Prove that the myths revolving around Suite 776 are true and to photograph Marcy in motion, as it is assumed that she lurks the hallways and terrorizes anybody willing enough to ring her bell… To criticize her. How many times will you ring the bell?

Maid of Sker is a first-person survival horror, set in a remote hotel with a gory and macabre history from British folklore. Armed with only a defensive sound device, you’ll utilise stealth tactics to avoid death amongst a cult of sound-based AI enemies. Set in 1898 and inspired by the haunting Welsh tale of Elisabeth Williams, this is a story of a family empire driven by torture, slavery, piracy, and a supernatural mystery that suffocates the grounds of the hotel.

The Letter is an interactive, horror/drama visual novel inspired by classic Asian horror films, Ju-ON: The Grudge and The Ring. Told through an immersive branching narrative, the game puts the players into the shoes of seven characters as they find themselves falling prey to a vicious curse plaguing the Ermengarde Mansion for centuries. In this game, your choices will shape and drive the story forward: will you risk saving them, despite the consequences, or leave them to die a gruesome death? The fate of all the characters is in your hands.

HOUSE ON THE HILL

House on the Hill is a first-person story driven horror game which gives you the choice of your own nightmare. You play as a young thief with a struggling family. Your partner convinced you to take the final job and steal a rare jewel from an old mansion. Getting inside was not easy, but it will be even harder to get out. Because the house will not let you go. There are nightmares inside. Each attempt to break free leads to a new story and a new ending. After each terrifying experience, a foggy evening will return, and you will go inside once again. The secrets of the mansion are open to those who are ready to plunge into madness. Uncover secrets of the house. Uncover secrets of your partner. Uncover your own secrets.

The Old Gods are reawakening, clawing their way back into a world that’s spiralling into madness. In hospitals, abandoned classrooms, quiet apartments, and dark forests, strange appearances and unexplainable phenomena test the sanity of residents in Shiokawa, Japan. Is it chaotic retribution, or the machinations of beings beyond our comprehension? This is WORLD OF HORROR: The end of the world is nigh, and the only solution is to confront the terror reigning over the apocalypse. Navigate this hellish reality through turn-based combat and unforgiving choices in this rogue-lite-style cosmic horror RPG.

Haunted houses, gruesome murders, terrifying ghouls, and some good ‘ole classic Japanese apocalypse will certainly fill your night with enough jumpscares to keep you on your toes until next year… I know I will be sleeping with my bedside light on for a while!

What games will you be playing on Halloween?  Let us know on Twitter!

I’m Fran, a Level 41 gamer currently located in Italy. When I am not busy writing, you can find me playing Yakuza—and other PC games—or spending hours on creating the perfect character in The Sims 4.