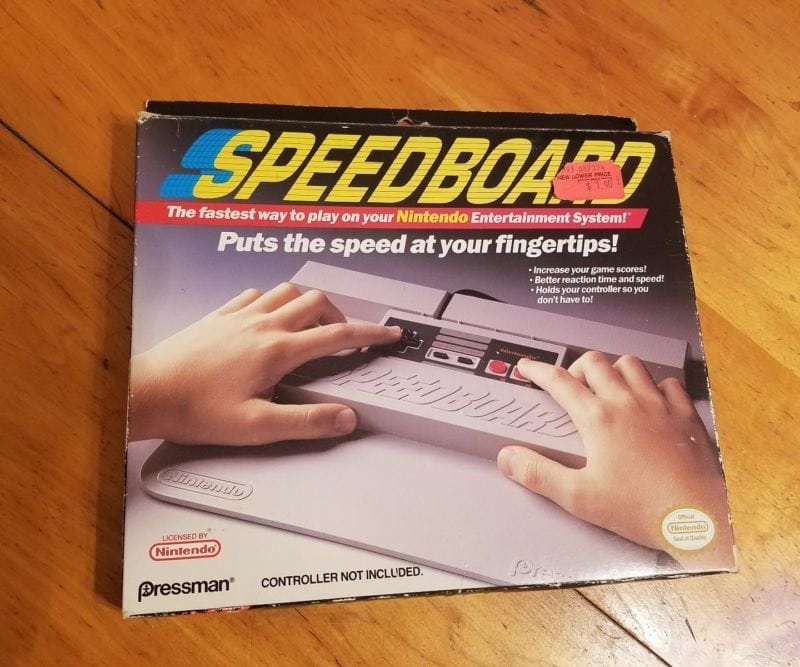 In a world where you can buy a little dot to put on your mouse to improve your aim and gamer rags to get Cheetos off of your hands, there is one gaming accessory more useless than them all.

The most useless gaming accessory of all time is undoubtedly the Speedboard for the Nintendo Entertainment System.

Released by Pressman in 1991, the peripheral was a piece of plastic designed for one purpose: to hold the NES controller so players could apparently press buttons faster without holding the controller themselves.  Seriously.

The Speedboard for the NES was given a decent push on release, including heavy advertising and an endorsement by NASCAR driver Kyle Petty.

Nintendo Power Magazine also praised it, saying: “The Speedboard, the fastest way to play your Nintendo Entertainment System! Puts the speed at your fingertips! Increase your game scores! Better reaction time and speed! Holds your controller so you don’t have to!”

Despite the marketing drive, the Speedboard was negatively received upon release and ended up being discontinued a few short months after release.

For a closer look of the Speedboard from all angles, check out this review by Peripheral Vision Gaming:

While there are a few bargains out there (our article featured image has a sticker saying it cost $1.90), the NES Speedboard has become something of a collector’s item and regularly sells for between $50 and $100.  Ouch.

The good news is, you can build one for yourself using Lego:

Though, admittedly, with the price of Lego, it might be worth forking out the cash for an original Speedboard…