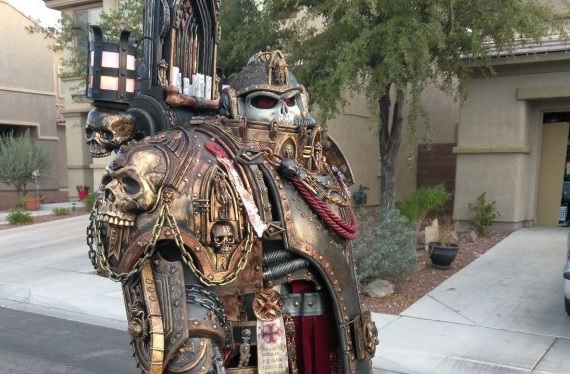 Cosplayers, be warned: Scott Schofield has raised the bar with his Black Templar Space Marine outfit.

Some cosplayers are content with wearing their winter clothes with a face mask and saying they’re a part of The Division.  Others buy ready-made outfits from the internet, just to take part.  And, both of these are okay.  Really.

Scott Schofield wasn’t fine with just doing an okay cosplay.  He wanted to create something incredible.

Scott started building his Black Templar Space Marin costume around October 2016.  Over the almost-two years that followed, he has customised his outfit using downloadable papermodel-style designs called pepakura which can be printed on foam or cardstock, along with creations made entirely from scratch using wood and EVA foam, given a rubber coating called plasti dip and supported with pipes.

Mind.  Blown.  It doesn’t even look real as it walks down the street.

This should give a sense of the ingenuity of the design:

Schofield plans to debut the finished product at Salt Lake Comic Con in September.  If you go along, be sure to keep an eye out for him – he shouldn’t be hard to find.