Posters covered my bedroom walls when I was younger.  I had a poster of Chelsea FC footballer Gianfranco Zola giving a thumbs-up surrounded by posters torn from video game magazines.  Perfect Dark, Final Fantasy 9 (though I wouldn’t get to play it for another few years) and Metal Gear Solid come to mind, but I’d take down and put up new posters every other week.

I shared a bedroom with my brother but had my own desk with a small colour TV.  I had my transparent orange N64 and cartridges stacked up alongside it, while my brother’s PlayStation and game cases sat beside his TV across the room.  From the Atari 2600 to the PlayStation 2 (when we finally moved into a house where we could have our own bedrooms), one thing remained constant: we loved video games and we loved showing them off in our shared space.

Artist Rachid Lotf perfectly captures the nostalgia I get when I think back to my gaming set up and my friend’s bedrooms growing up.  His digital compositions are dense and over-exaggerated.  Games spill across floors and posters cover almost every piece of wallpaper.  While his depiction of gaming during various eras isn’t an exact mirror of any room I have ever been into, each picture takes me back to different phases of my childhood.  Memories ooze from every deliberate minute detail.

Rachid has created pieces of art featuring most popular consoles,plus a 90’s PC gaming bedroom, which reminds me of my cousin’s bedroom (literally the only PC gamer I knew until I was in my 20s).  Rachid has made pictures of bedrooms for the Atari 2600, SNES, N64, PS1, PS2, Game Boy and more.  The posters on the walls show other games released at the time and the general aesthetic of the rooms reflects the times.  They are truly beautiful.

Here are a few of my favourite pieces: 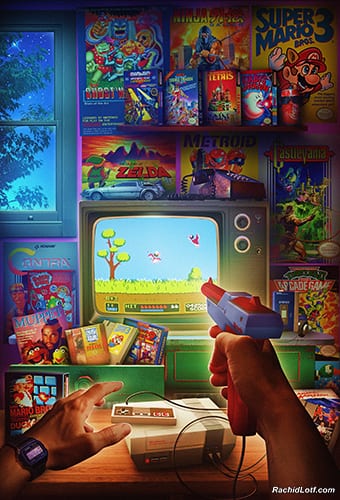 Playing Duck Hunt with the NES Zapper light gun with my best friend is one of my fondest memories.  We’d cheat and put the end of the barrel right on the screen then get frustrated when the dog sniggered at us, trying to shoot him too. 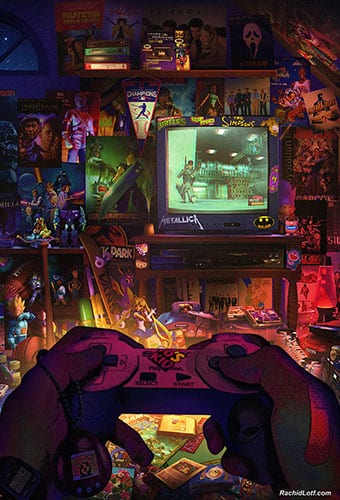 Playing Metal Gear Solid on the PS1 was an eye-opening experience.  My brother and I exclaimed that it was “so realistic” and “looks like a movie” whenever we booted it up.

Rachid has dozens of pieces of art spanning several eras on his website.  You can buy printed copies of the designs or digital files.  Rachid also has the option for you to choose the game for the screen and posters for the wall, to better capture the titles you were playing at the time.  There’s also the option to have a piece of art created exclusively for you.

Video games have brought me so many happy memories through the years, and many of them come rushing back when I look at Rachid’s art.  I’m excited to see what he creates next.

Which console and games would you want to see on your poster?