Should you introduce your kids to the world of gaming by starting them with retro or modern games?

Super Mario Bros. or Super Mario 3D World? A Link to the Past or Twilight Princess HD? F-Zero or…GTA ONLINE?!

Being a parent is, without a doubt, the most rewarding life choice I have made in my 32 years on this planet (I’m equally proud of the life choices I have made on other planets, but we’ll talk about those another time). It fills me with joy to know that my legacy will live on through those little mud-covered monsters, drawing abstract princesses and dinosaurs on walls with daddy’s permanent markers.

But, being a parent comes with responsibility.  Our children need food, somewhere safe to live, love, encouragement, attention, and someone to check for monsters under the bed.

One such responsibility is how we introduce our children to the world.  People, art, music, television and, my favourite, gaming.  The introduction we choose will impact their opinions going forward and unfortunately, we can’t simply re-load an earlier save to undo a bad decision.

When I was growing up, my dad insisted that my introduction to music should be with the musicians that he grew up listening to – mainly Rod Stewart.  Now, Rod Stewart has had a long career for a reason, but when my friends were listening to more modern music, I quickly came to resent the sound of that husky voice.  This resentment carried over even into adulthood, until just a few years ago when I found myself humming along to a Rod Stewart song and thought “hey, the old man wasn’t totally wrong.”  Don’t tell him I said that.

The question is, do I want my kids to grow up playing the same video games I played? Should they follow my journey through the ages to ultimately appreciate the modern day?  Or, do I just let them dive into recent games with all of the modern comforts we have come to enjoy?

There is no right or wrong answer, but it is an interesting conundrum to ponder. 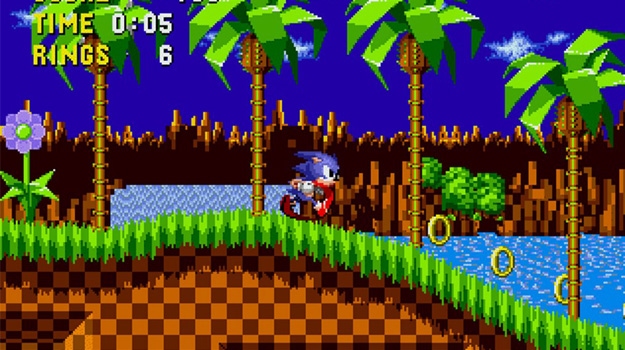 If I turn my kids against Sonic, I’ll never forgive myself.

Supposing I decide to go down the retro route, does it really have to start at the beginning?  My first console was the Atari 2600 JR – should my little ones have to experience Jungle Hunt and Combat?

Or should they jump through each of my favourite games only? Sonic the Hedgehog 2 on the Master System, F-Zero on the Super Nintendo, Super Mario Bros. 3 on the NES, Pokemon Blue on the original Gameboy, and so on.

And, maybe they should experience the “classics” that I have never played but that seem to get mentioned in every retro gaming conversation; Zelda, Chronos Trigger, Ecco The Dolphin? Yes, I said Zelda, don’t judge.

If I decide to look at more modern games, for their beautiful 3D graphics, refined control schemes, and realistic sound effects, where does it start?  Viva Pinata on the Xbox 360?  Little Big Planet on the PS3?  Any Lego game ever on the PC?  And that’s discounting the plethora of kid-friendly games on the Nintendo Switch, Xbox One, PS4 and PC.

Personally, I’m going to introduce my children to my favourite games moving through the ages.  I would like them to appreciate where video games have come from and where they are going.  I want them to understand why thumbsticks are such a great innovation, and to experience the sensation of blowing on a cartridge before slotting it into a blocky console (even if you’re not supposed to).  I don’t want them to look down on 8-bit games as though they are inferior. I want them to understand that fun is fun regardless of the screen resolution.

Here’s to hoping, anyway.  For all I know, my Player-2-and-3-in-waiting may tell me I’m a big geek and take up something less interesting, like aerospace engineering. Which would be fine but, I’m sure you’ll agree, a total waste of time.